Programmez un écran LCD - Perfectionnez-vous dans la programmation Arduino. EngineerGeek – Your source for arduino tutorials and more! The $2 32-Bit Arduino (with Debugging) I have a bit of a love/hate relationship with the Arduino. 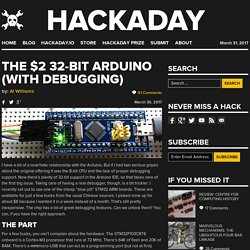 But if I had two serious gripes about the original offering it was the 8-bit CPU and the lack of proper debugging support. Now there’s plenty of 32-bit support in the Arduino IDE, so that takes care of the first big issue. Taking care of having a real debugger, though, is a bit trickier. I recently set out to use one of the cheap “blue pill” STM32 ARM boards.

These are available for just a few bucks from the usual Chinese sources. The Part For a few bucks, you can’t complain about the hardware. You can find a lot more information on this wiki. From my point of view, though, I don’t want to try to debugging over the serial port and if I have the ST-Link port already set up, I don’t care about a bootloader. The “blue pill” designation is just a common nickname referring to the Matrix, not the pharmaceuticals you see on TV ads. The Plan Step 2 isn’t strictly necessary, but it will make step 5 easier. Coding Debugging at Last. Blue Pill - STM32duino wiki. Hardware installation The USB standard require a 1.5k pullup resistor on D+, but this board is known to have a wrong value (R10 on the board). 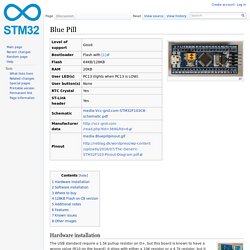 It ships with either a 10K resistor or a 4.7k resistor, but it should be replaced with a 1.5k resistor, or put an appropriate resistor value (e.g 1.8k) in between PA12 and 3.3V. It is also true that some PCs are tolerant of incorrect value so, before you change the resistance, you can try if it works in your case. Software installation Bootloader needs to be flashed using USB to Serial or ST-Link (SWD) See Flashing the bootloader Follow the normal Installation guide Note that after first flashing the bootloader you may have to place the board into "perpetual bootloader" mode before you can upload a sketch; place resistor between pin PC14 and 3.3V, then reset the board.

Where to buy Ebay or AliExpress etc 128KB Flash on C8 version F103C8 ST MCU is declared to have 64KB of Flash, but virtually all the C8 MCU tested have 128KB of flash instead. Features. Arduino Workshop for Beginners - Tutorial Australia. Adafruit Learning System. Hackmypi. By MWAGNER Posted on March 20, 2017 at 8:00 PM Raspberry Pi Security System Part 1: The camera. 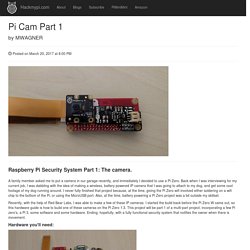 A family member asked me to put a camera in our garage recently, and immediately I decided to use a Pi Zero. Back when I was interviewing for my current job, I was dabbling with the idea of making a wireless, battery powered IP camera that I was going to attach to my dog, and get some cool footage of my dog running around. I never fully finished that project because, at the time, giving the Pi Zero wifi involved either soldering on a wifi chip to the bottom of the Pi, or using the MicroUSB port.

Ever wondered how to control items like your fans, lights, and more using your phone or computer from anywhere? 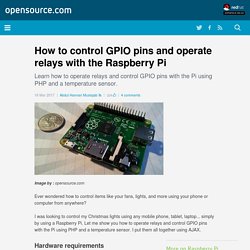 I was looking to control my Christmas lights using any mobile phone, tablet, laptop... simply by using a Raspberry Pi. Let me show you how to operate relays and control GPIO pins with the Pi using PHP and a temperature sensor. I put them all together using AJAX. Hardware requirements Raspberry PiSD Card with Raspbian installed (any SD card would work, but I prefer to use a 32GB class 10 card)Power adapterJumper wires (female to female and male to female)Relay board (I use a 12V relay board with for relays)DS18B20 temperature probeWi-Fi adapter for Raspberry PiRouter (for Internet access, you need to have a port-forwarding supported router)10K-ohm resistor Software requirements Download and install Raspbian on your SD CardWorking Internet connectionApache web serverPHPWiringPiSSH client on a Mac or Windows client General configurations and setup 1.