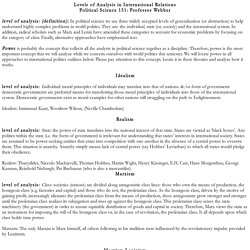 They are: the individual, state (or, society) and the international system. In addition, radical scholars such as Marx and Lenin have amended these categories to account for economic problems by focusing on the category of class. Finally, alternative approaches have emphasized text. Power is probably the concept that collects all the analysts in political science together as a discipline. Level of analysis: Individual: moral principles of individuals may translate into that of nations. Idealists: Immanuel Kant, Woodrow Wilson, (Neville Chamberlain)

Polsc6 2 actors and influences. Student Feature - Levels of Analysis. This is an excerpt from International Relations – an E-IR Foundations beginner’s textbook available now on Amazon (UK, USA, Ca, Ger, Fra), in all good book stores, and via a free PDF download. 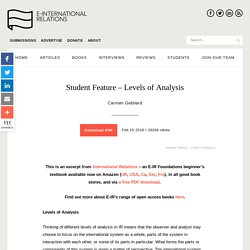 In International relations, what is the difference between hegemony and unipolarity? Zobraz_cast. Historically, there were few types of international systems. 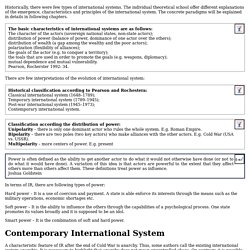 The individual theoretical school offer different explanations of the emergence, characteristics and principles of the international system. The concrete paradigms will be explained in details in following chapters. The basic characteristics of international systems are as follows:The character of the actors (sovereign national states, non-state actors);distribution of power (balance of power, dominance of one actor over the others);distribution of wealth (a gap among the wealthy and the poor actors);polarization (flexibility of alliances);the goals of the actor (e.g. to conquer a territory);the toals that are used in order to promote the goals (e.g. weapons, diplomacy);mutual dependence and mutual vulnerability.

Pearson, Rocherster 1992: 34. HuffPost is now a part of Oath. BEIJING — In periods of the 19th and 20th centuries, the United Kingdom and United States maintained absolute dominance in a unipolar world, which was why they were called “British century” and “American century.” 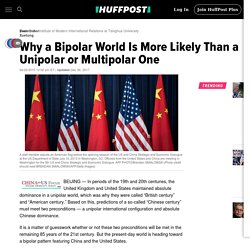 Based on this, predictions of a so-called “Chinese century” must meet two preconditions — a unipolar international configuration and absolute Chinese dominance. Help us tell more of the stories that matter from voices that too often remain unheard. It is a matter of guesswork whether or not these two preconditions will be met in the remaining 85 years of the 21st century. But the present-day world is heading toward a bipolar pattern featuring China and the United States. Chinese Comprehensive National Strength Isn’t Global Even if China fulfills its second centennial goal of “building a prosperous and strong, democratic, civilized, harmonious socialist modern country” in 2049, the U.S. will not necessarily lose its superpower status thereby.

New Year Migration. From a Unipolar to a Bipolar Superpower System: The Future of the Global Power Dynamic - Carnegie-Tsinghua Center - Carnegie Endowment for International Peace. The Weakening of the Unipolar System The United States has been losing its status as the strongest superpower since the end of the Cold War. 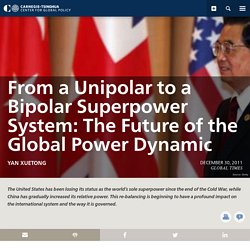 The current international superpower dynamic is transitioning from a unipolar system with the United States as its center to a bipolar system with China occupying the other pole. The superpower disparity between China and the United States is narrowing. China’s GDP in 2011 is expected to be 45 percent of the U.S. GDP. Yan Xuetong Yan Xuetong is one of China’s leading experts on China’s foreign policy, national security, and U.S. More > The international system is no longer characterized by a unipolar superpower with multiple great powers. From a strategic standpoint, the United States’ status as a unipolar superpower remains as strong as ever. China though is the only country with enough power to challenge the current system. UNIPOLAR, BIPOLAR OR MULTIPOLAR INTERNATIONAL SYSTEM? THE DEFENSE INDUSTRY FACTOR[#234560] 203498. Polarity (international relations)