Ten Questions You Should Ask Before You Flip Your Classroom. As the school year starts, many teachers are wanting to implement flipped learning into their classes. 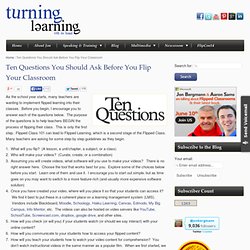 Before you begin, I encourage you to answer each of the questions below. The purpose of the questions is to help teachers BEGIN the process of flipping their class. This is only the first step. Response: To Flip, Or Not To Flip, A Classroom - That Is The Question - Classroom Q&A With Larry Ferlazzo. Flipping the Classroom: A revolutionary approach to learning presents some pros and cons. Illustration by Brian Stauffer Back in 2007, two high school science teachers in Woodland Park, CO, decided to try a “crazy idea.” 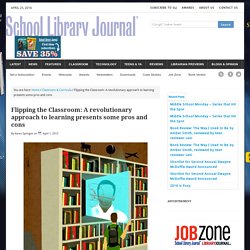 “We said, ‘What if we stopped lecturing and committed all our lectures to videos?’” Says Jon Bergmann, now the lead technology facilitator at the Joseph Sears School in Kenilworth, IL. He and fellow educator Aaron Sams posted their short films—15 to 20 minutes long—for students to watch at home. (Parents could also look and say, “Oh, I see how the teacher wants it done!” Flipping the classroom lets school become a place for talking, doing group projects, and getting individual help from teachers—and lets home become a place for watching instructional videos. Aside from the technology involved, it’s not necessarily a new idea.

Flipped Instruction or No Instruction? - Coach G's Teaching Tips. One premise of the flipped classroom model is that students should spend most of their time in class interacting with content rather than listening to teachers present content. 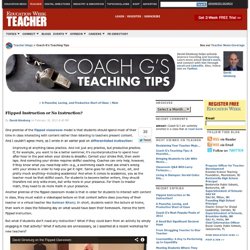 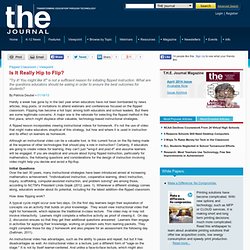 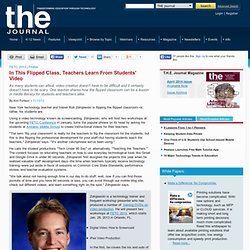 One teacher shares how the flipped classroom can be a lesson in media literacy for students and teachers alike. By Kim Fortson11/13/12. Why I Gave Up Flipped Instruction. A little over a year ago I wrote a post about the flipped classroom, why I loved it, and how I used it. 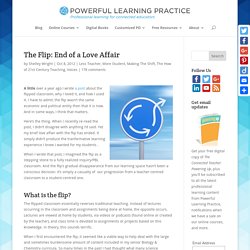 I have to admit, the flip wasn’t the same economic and political entity then that it is now. And in some ways, I think that matters. Here’s the thing. When I recently re-read the post, I didn’t disagree with anything I’d said. Yet my brief love affair with the flip has ended. Is the flipped classroom a better version of a bad thing? Not all educators are sold on the flipped classroom idea, however, and many feel it is just a way to reinvent lecturing—which is considered antiquated among some educational groups. 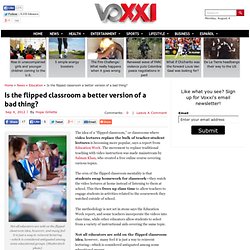 (Shutterstock photo) The idea of a “flipped classroom,” or classrooms where video lectures replace the bulk of teacher-student lectures is becoming more popular, says a report from Education Week. The movement to replace traditional teaching with video instruction was made mainstream by Salman Khan, who created a free online course covering various topics. The crux of the flipped classroom mentality is that students swap homework for classwork—they watch the video lectures at home instead of listening to them at school. This then frees up class time to allow teachers to engage students in activities related to the coursework they watched outside of school. Educators Evaluate 'Flipped Classrooms' Published Online: August 27, 2012 Published in Print: August 29, 2012, as Educators View 'Flipped' Model With a More Critical Eye Includes correction(s): September 4, 2012 Benefits and drawbacks seen in replacing lectures with on-demand video A growing number of educators are working to turn learning on its head by replacing traditional classroom lectures with video tutorials, an approach popularly called the "flipped classroom. 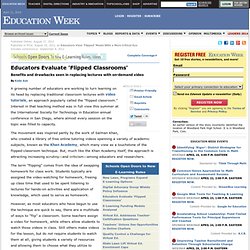 " Interest in that teaching method was in full view this summer at the International Society for Technology in Education annual conference in San Diego, where almost every session on the topic was filled to capacity. The movement was inspired partly by the work of Salman Khan, who created a library of free online tutoring videos spanning a variety of academic subjects, known as the Khan Academy, which many view as a touchstone of the flipped-classroom technique. 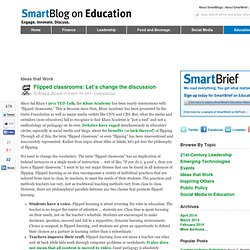 This is because since then, Khan Academy has been promoted by the Gates Foundation as well as major media outlets like CNN and CBS. But, what the media and outsiders (non-educators) fail to recognize is that Khan Academy is “just a tool” and not a methodology or pedagogy on its own. Debates have raged simultaneously in educators’ circles, especially in social media and blogs, about the benefits (or lack thereof) of flipping.

Through all of this, the term “flipped classroom” or even “flipping” has been misconstrued and inaccurately represented. Rather than argue about titles or labels, let’s get into the philosophy of flipping.

Related:  Why I Gave Up Flipped Instruction   -  Education   -  Enterprise