Getting Started with Vagrant on OSX 10.10 Yosemite. Vagrant is a bit of an odd name for a software app but kind of follows along the trend of naming like Git.It has been around for over 12 months and is an open source project. 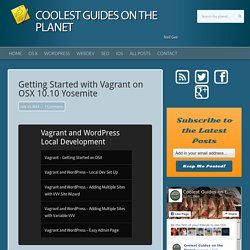 It essentially builds virtual images from references (boxes) of a type of operating system with applications and dependent software, this can be referenced in a template file that is given to users on a group project to ensure that their development environment is the same as everybody elses as it is using the same virtual image. Sort of like making sure everyone is singing from the same hymn book. It is also great for checking a development that is built on a different environment to which it is being deployed, so you can set up the target environment in a virtual instance to test. Installing Vagrant Download the latest installer, for OSX there is a point and click .dmg installer. Run the .dmg and install the Vagrant.pkg package file.

Upgrading Vagrant on OSX You can check the version of vagrant you have by typing: #! Laravel Homestead - Laravel - The PHP Framework For Web Artisans. Introduction Laravel strives to make the entire PHP development experience delightful, including your local development environment. 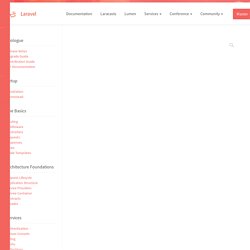 Vagrant provides a simple, elegant way to manage and provision Virtual Machines. Laravel Homestead is an official, pre-packaged Vagrant "box" that provides you a wonderful development environment without requiring you to install PHP, HHVM, a web server, and any other server software on your local machine. No more worrying about messing up your operating system! Vagrant boxes are completely disposable. Homestead runs on any Windows, Mac, or Linux system, and includes the Nginx web server, PHP 5.6, MySQL, Postgres, Redis, Memcached, Node, and all of the other goodies you need to develop amazing Laravel applications. Note: If you are using Windows, you may need to enable hardware virtualization (VT-x). Homestead is currently built and tested using Vagrant 1.7. 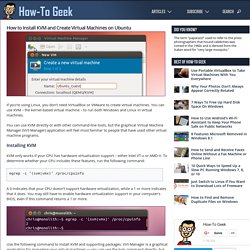 You can use KVM – the kernel-based virtual machine – to run both Windows and Linux in virtual machines. You can use KVM directly or with other command-line tools, but the graphical Virtual Machine Manager (Virt-Manager) application will feel most familiar to people that have used other virtual machine programs. Installing KVM KVM only works if your CPU has hardware virtualization support – either Intel VT-x or AMD-V. To determine whether your CPU includes these features, run the following command: egrep -c ‘(svm|vmx)’ /proc/cpuinfo A 0 indicates that your CPU doesn’t support hardware virtualization, while a 1 or more indicates that it does. Use the following command to install KVM and supporting packages. Sudo apt-get install qemu-kvm libvirt-bin bridge-utils virt-manager Only the root user and users in the libvirtd group have permission to use KVM virtual machines.

Sudo adduser name libvirtd. KVM - The Linux Kernel-Based Virtual Machine. I believe that KVM will be a significant player in the virtualization market. 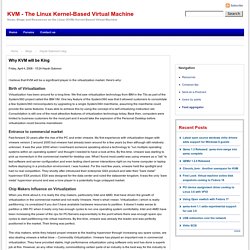