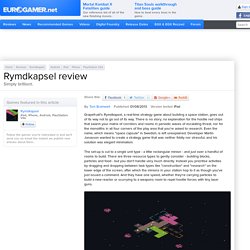 There is no story; no explanation for the hostile red ships that swarm your matrix of corridors and rooms in periodic waves of escalating threat, nor for the monoliths in all four corners of the play area that you're asked to research. Even the name, which means "space capsule" in Swedish, is left unexplained. Developer Martin Jonasson wanted to create a strategy game that was neither fiddly nor stressful, and his solution was elegant minimalism. The set-up is cut to a single unit type - a little rectangular minion - and just over a handful of rooms to build. There are three resource types to gently consider - building blocks, particles and food - but you don't handle very much directly. The dancing sine waves of Niklas Ström's restrained soundtrack keep you company for several hours without becoming overfamiliar.

NAPOLEONIC CHESS. Initial Setup Played on a 14x14 board. 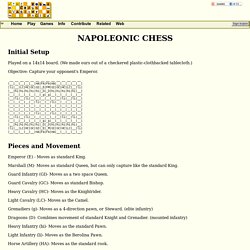 (We made ours out of a checkered plastic-clothbacked tablecloth.) Objective: Capture your opponent's Emperor. Bfxr. Make sound effects for your games. Online Courses from the World's Experts. This is the online game development school that was a runaway success on Kickstarter. 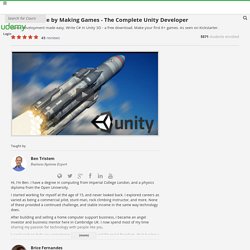 Learn how to create video games using Unity 3D, the free-to-use game development tool. We start super simple so you'll be ok with little or no experience. With our online tutorials, you'll be amazed what you can achieve. Benefit from our world-class support (see the number of discussions). Go on to build several games including a full 3D version of Pong with an online multiplayer scoreboard, and more. We are adding closed captions (subtitles) Currently the first 30% of videos are captioned, and the rest are coming. You will have access to a course forum where you can discuss topics on a course-wide basis, or down to the individual video. The course is project-based, so you will not just be learning dry programming concepts, but applying them immediately to real indie games as you go.

Oh, and it's just bigger and better than the competition. Unity - Game Engine. Developing a Chess variant - Jocly Wiki. Introduction For this tutorial, we will implement Shako, a 10x10 chess variant from Jean-Louis Cazaux, making use of a piece similar to the Xiangqi cannon and an elephant with special movement. 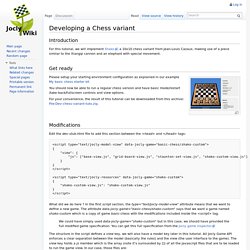 Get ready Please setup your starting environment configuration as explained in our example My basic chess starter kit You should now be able to run a regular chess version and have basic mode/restart/take-back/fullscreen controls and view options. For your convenience, the result of this tutorial can be downloaded from this archive: File:Dev-chess-variant-tuto.zip. Modifications Edit the dev-stub.html file to add this section between the <head> and </head> tags: What did we do here ? We could have simply used data-jocly-game="shako-custom" but in this case, we should have provided the full modified game specification. The structure in the script defines a view key, we will also have a model key later in this tutorial. Edit the file dev-stub.html, locate the line: and replace it with: Game development API. Important note: the former Jocly Game Developer interface which was using an IDE on the Jocly site has been obsoleted. 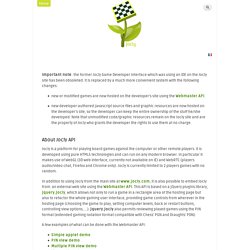 It is replaced by a much more convenient system with the following changes: new or modified games are now hosted on the developer's site using the Webmaster API. New developer-authored javascript source files and graphic resources are now hosted on the developer's site, so the developer can keep the entire ownership of the stuff he/she developed. Note that unmodified code/graphic resources remain on the Jocly site and are the property of Jocly who grants the developer the rights to use them at no charge. Jocly is a platform for playing board games against the computer or other remote players. In addition to using Jocly from the main site at www.jocly.com, it is also possible to embed Jocly from an external web site using the Webmaster API. Chess. Tools to Package Your HTML5 App for Mobile Devices.

This time we'll have a special treat for you, a guest post by Olaf Horstmann. 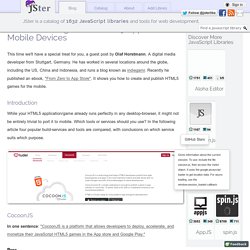 A digital media developer from Stuttgart, Germany. He has worked in several locations around the globe, including the US, China and Indonesia, and runs a blog known as indiegamr. Recently he published an ebook, "From Zero to App Store". It shows you how to create and publish HTML5 games for the mobile. Introduction While your HTML5 application/game already runs perfectly in any desktop-browser, it might not be entirely trivial to port it to mobile. CocoonJS In one sentence: "CocoonJS is a platform that allows developers to deploy, accelerate, and monetize their JavaScript HTML5 games in the App store and Google Play.