Schizotypal personality disorder: Causes. Personality is the combination of thoughts, emotions and behaviors that makes you unique. 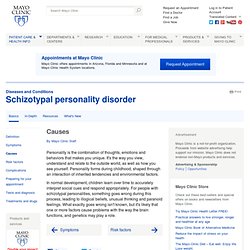 It's the way you view, understand and relate to the outside world, as well as how you see yourself. Personality forms during childhood, shaped through an interaction of inherited tendencies and environmental factors. In normal development, children learn over time to accurately interpret social cues and respond appropriately. For people with schizotypal personalities, something goes wrong during this process, leading to illogical beliefs, unusual thinking and paranoid feelings. What exactly goes wrong isn't known, but it's likely that one or more factors cause problems with the way the brain functions, and genetics may play a role. 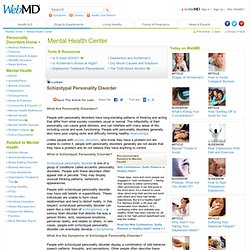 Schizotypal personality disorder is a mental health condition in which a person has trouble with relationships and disturbances in thought patterns, appearance, and behavior. 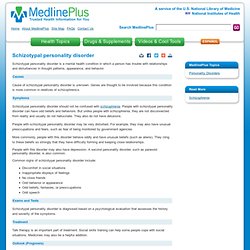 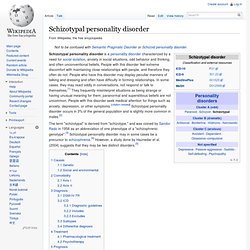 People with this disorder feel extreme discomfort with maintaining close relationships with people, and therefore they often do not. People who have this disorder may display peculiar manners of talking and dressing and often have difficulty in forming relationships. In some cases, they may react oddly in conversations, not respond or talk to themselves.[1] They frequently misinterpret situations as being strange or having unusual meaning for them; paranormal and superstitious beliefs are not uncommon. 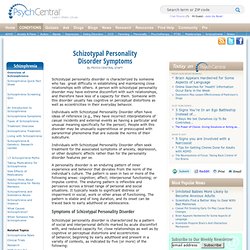 A person with schizotypal personality disorder may have extreme discomfort with such relationships, and therefore have less of a capacity for them. Someone with this disorder usually has cognitive or perceptual distortions as well as eccentricities in their everyday behavior. Individuals with Schizotypal Personality Disorder often have ideas of reference (e.g., they have incorrect interpretations of casual incidents and external events as having a particular and unusual meaning specifically for the person).

People with this disorder may be unusually superstitious or preoccupied with paranormal phenomena that are outside the norms of their subculture. A personality disorder is an enduring pattern of inner experience and behavior that deviates from the norm of the individual’s culture. Untitled.