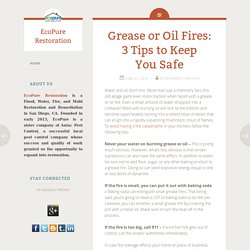 More than just a chemistry fact, this old adage gains even more traction when faced with a grease or oil fire. Even a small amount of water dropped into a container filled with burning oil will sink to the bottom and become superheated, turning into a violent blast of steam that can erupt into a rapidly expanding mushroom cloud of flames. To avoid having a fire catastrophe in your kitchen, follow the following tips: Never pour water on burning grease or oil – This is pretty much obvious. However, what’s less obvious is that certain substances can also have the same effect. If the fire is small, you can put it out with baking soda – Baking soda can extinguish small grease fires. Types of Flood and Their Degrees of Destruction. According to the Institute of Inspection Cleaning and Restoration Certification (IICRC), there are three categories of liquids that can flood your home and cause destruction. 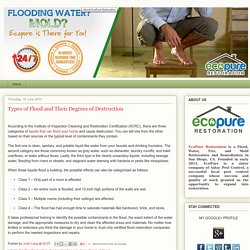 You can tell one from the other based on their sources or the typical level of contaminants they contain. The first one is clean, sanitary, and potable liquid like water from your faucets and drinking fountains. The second category are those commonly known as gray water, such as dishwater, laundry runoffs, and toilet overflows, or leaks without feces. Why You Can’t Delay Sewer Flood Damage Cleanup. Several Possible Causes of a Flooded Basement. Water damage is extremely costly to homeowners, and no other space in a house gets it worse during a flood than the basement. 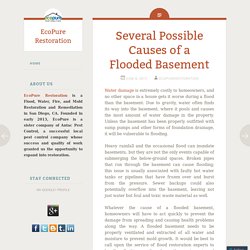 Due to gravity, water often finds its way into the basement, where it pools and causes the most amount of water damage in the property. Unless the basement has been properly outfitted with sump pumps and other forms of foundation drainage, it will be vulnerable to flooding. Heavy rainfall and the occasional flood can inundate basements, but they are not the only events capable of submerging the below-ground spaces. Broken pipes that run through the basement can cause flooding; this issue is usually associated with faulty hot water tanks or pipelines that have frozen over and burst from the pressure. Fighting Fungi: The Mold Remediation Process.

Mold that grows indoors often starts small, but it does not take long for the fungi to spread and grow. 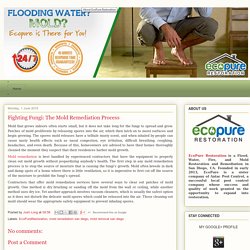 Patches of mold proliferate by releasing spores into the air, which then latch on to moist surfaces and begin growing. The spores mold releases have a telltale musty scent, and when inhaled by people can cause nasty health effects such as nasal congestion, eye irritation, difficult breathing, coughing, headaches, and even death. Because of this, homeowners are advised to have their homes thoroughly cleaned the moment they suspect that their residences harbor mold growth. Mold remediation is best handled by experienced contractors that have the equipment to properly clean out mold growth without jeopardizing anybody’s health. The first step in any mold remediation process is to stop the source of moisture that is causing the fungi’s growth.

Contractors that offer mold remediation services have several ways to clear out patches of mold growth. Mold Remediation Tips to Keep in Mind.

The moment you detect mold in your home, call a mold remediation company immediately. Prolonged exposure to mold and mold spores present a variety of health risks, especially among the elderly and asthmatics. – ecopurerestoration

The Effects of Letting Soot Linger. When it comes to fire damage, smoke and the actual fire itself aren’t the only things you should be concerned about; you should also consider the damage caused by soot. 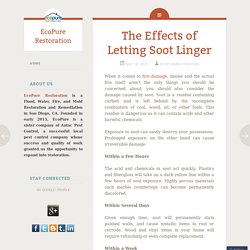 Soot is a residue containing carbon and is left behind by the incomplete combustion of coal, wood, oil, or other fuels. This residue is dangerous as it can contain acids and other harmful chemicals. Exposure to soot can easily destroy your possessions. Prolonged exposure, on the other hand can cause irreversible damage: Within a Few Hours The acid and chemicals in soot act quickly. Within Several Days Given enough time, soot will permanently stain painted walls, and cause metallic items to rust or corrode. 3 Common Causes of Water Damage in Households. Water damage can weaken your home’s very foundation. 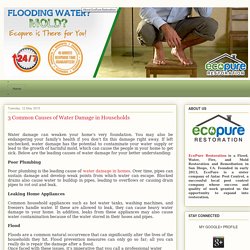 Water damage that’s left unrepaired can lead to greater problems not only with regards to the integrity of your home, but your family members’ health as well. – ecopurerestoration 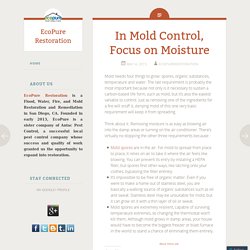 The last requirement is probably the most important because not only is it necessary to sustain a carbon-based life form, such as mold, but it’s also the easiest variable to control. Just as removing one of the ingredients for a fire will snuff it, denying mold of this one very basic requirement will keep it from spreading. Think about it. Removing moisture is as easy as blowing air into the damp areas or turning on the air conditioner. There’s virtually no stopping the other three requirements because: Mold spores are in the air. Do Firefighters Do Fire Restoration Work? It’s likely that a home will sustain water damage in a fire, but it’s not necessarily from the ruined plumbing. 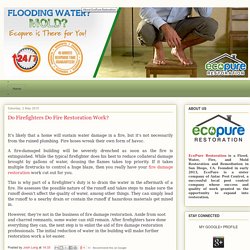 Fire hoses wreak their own form of havoc. A fire-damaged building will be severely drenched as soon as the fire is extinguished. While the typical firefighter does his best to reduce collateral damage brought by gallons of water, dousing the flames takes top priority. If it takes multiple firetrucks to control a huge blaze, then you really have your fire damage restoration work cut out for you. The Colors of Water Damage.

In psychology, each color has a meaning and can be linked to certain personalities or traits. This is also true of water damage, wherein colors have their own meaning. – ecopurerestoration

Rising from the Ashes: Assessing Fire Damage. In the aftermath of a house fire, regardless of how large or small it is, you must carefully assess the damage. 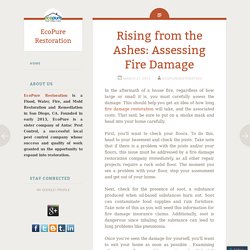 This should help you get an idea of how long fire damage restoration will take, and the associated costs. That said, be sure to put on a smoke mask and head into your home carefully. First, you’ll want to check your floors. A List of Things You Can Restore After a Flood. If you think a little water will do you no harm, you might want to reconsider once you are on the receiving end of a flood. 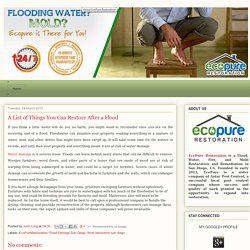 Floodwater can inundate your property, soaking everything in a mixture of water, mud, and other debris that might have been swept up. It will take some time for the waters to recede, and until then your property and everything inside it are at risk of water damage. Water damage is a serious issue. Floods can leave behind nasty stains that can be difficult to remove. Saving Your Home After a Disastrous Flood.

Although water might seem like a fairly harmless substance, it can be a destructive force during floods. Disastrous floods can be caused either by heavy downpours or by severe water leaks, and both are very dangerous to homeowners and their property. – ecopurerestoration

Dead Mold Can Still Make You Sick. Steps to Take After a Fire. Your humble abode held up against the worst fire in your city in decades.

Your humble abode held up against the worst fire in your city in decades. All those years of planning the ideal fireproof home seemed to have paid off, but don't give your home a pat on the back—or in this case, the siding—just yet. – ecopurerestoration

All those years of planning the ideal fireproof home seemed to have paid off, but don't give your home a pat on the back—or in this case, the siding—just yet. In any natural disaster, the danger is only over when authorities say so. You never know when the worst dangers still lie in wait following a fire. Firefighters will cordon off the entire area to check for immediate safety risks.