Economicbuddy is the blog related to India, World economy and helps you to get update with the daily economic change round the world. In this blog, our main aim is to aware to you with the current economic situation of our country as well as the world economics up and downs. 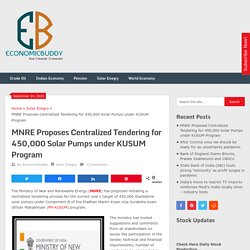 The ministry has invited suggestions and comments from all stakeholders on issues like participation in the tender, technical and financial requirements, number of vendors to be empaneled in each category, cluster wise bidding, minimum capacity allocation to the lowest bidder, and contract performance guarantee requirements, among others. The stakeholders should submit their responses to the implementation of Component B of the KUSUM program by September 30, 2020. The ministry is planning to install 1.75 million standalone solar water pumps by the year 2022. After Corona virus we should be ready for an uncertainty pandemic - Economicbuddy- World Economic News & Financial Tips. The next few months will tell us a lot about the shape of the coming global recovery. 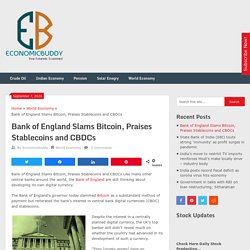 The Bank of England’s governor today slammed Bitcoin as a substandard method of payment but reiterated the bank’s interest in central bank digital currencies (CBDC) and stablecoins. Despite the interest in a centrally planned digital currency, the UK’s top banker still didn’t reveal much on whether the country had advanced in its development of such a currency. “They [crypto-assets] have no connection at all to money,” said Andrew Bailey in a speech to the Bookings Institute today. Using Bitcoin as an example, he added that cryptocurrencies “may have extrinsic value” but are a “highly risky investment opportunity.” On CBDCs, Bailey said although they have potential, launching one would require “careful consideration” and didn’t offer any clues on the BoE’s development of such an asset. 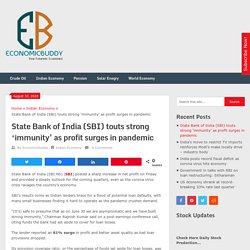 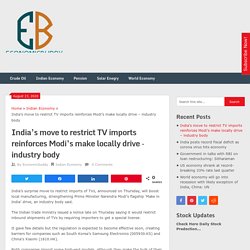 The Indian trade ministry issued a notice late on Thursday saying it would restrict inbound shipments of TVs by requiring importers to get a special license. It gave few details but the regulation is expected to become effective soon, creating barriers for companies such as South Korea’s Samsung Electronics (005930.KS) and China’s Xiaomi (1810.HK). Both companies import some high-end models, although they make the bulk of their TVs for the Indian market locally through contract manufacturers. Japan’s Sony (6758.T) makes 99% of its TVs for the Indian market locally and so is unlikely to be affected. “We are losing precious jobs because of unabated imports,” he said. India’s TV imports were worth $780 million in 2019/20, the ICEA said. *image source from Google Please help us by sharing it. India posts record fiscal deficit as corona virus hits economy - Economicbuddy- World Economic News & Financial Tips.

India’s fiscal deficit touched a record $88.5 billion in the April-June quarter, 83.2% of the target for the whole of the current fiscal year, reflecting the impact of the corona virus pandemic on tax collections and as the government front-loaded its spending. 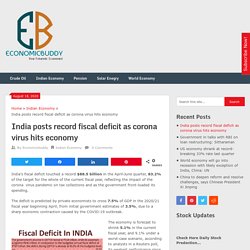 The deficit is predicted by private economists to cross 7.5% of GDP in the 2020/21 fiscal year beginning April, from initial government estimates of 3.5%, due to a sharp economic contraction caused by the COVID-19 outbreak. The economy is forecast to shrink 5.1% in the current fiscal year, and 9.1% under a worst-case scenario, according to analysts in a Reuters poll, its weakest performance since 1979. Government data released on Friday showed total net federal tax receipts in three months through June declined more than 46% year-on-year to 1.35 trillion rupees ($18.05 billion), compared with 2.51 trillion rupees a year ago, even though taxes on fuel products have been increased. *image source from Google. Government in talks with RBI on loan restructuring: Sitharaman - Economicbuddy- World Economic News & Financial Tips. The Indian government is working with the central bank on a possible one-time restructuring of loans due to the impact of the COVID-19 pandemic on businesses, finance minister Nirmala Sitharaman said on Friday. 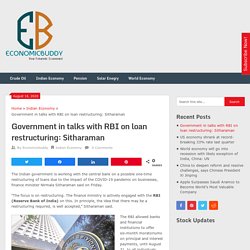 “The focus is on restructuring. The finance ministry is actively engaged with the RBI (Reserve Bank of India) on this. In principle, the idea that there may be a restructuring required, is well accepted,” Sitharaman said. The RBI allowed banks and financial institutions to offer six-month moratoriums on principal and interest payments, until August 31, to all individuals and corporates holding term loans. However, several bankers have highlighted the stress this is creating on bank balance sheets. Earlier this week, HDFC Bank chairman Deepak Parekh in an exchange with the RBI governor said the moratorium was being partly misused and should not be continued as it would hurt banks, and particularly smaller non-bank finance companies or shadow banks.

*image source from Google. US economy shrank at record-breaking 33% rate last quarter - Economicbuddy- World Economic News & Financial Tips. The U.S. economy shrank at a dizzying 32.9% annual rate in the April-June quarter - by far the worst quarterly plunge ever - when the viral outbreak shut down businesses, throwing tens of millions out of work and sending unemployment surging to 14.7%, the government said Thursday. 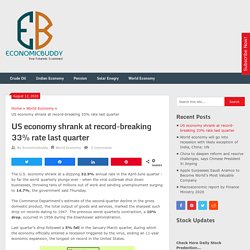 The Commerce Department's estimate of the second-quarter decline in the gross domestic product, the total output of goods and services, marked the sharpest such drop on records dating to 1947. The previous worst quarterly contraction, a 10% drop, occurred in 1958 during the Eisenhower administration. World economy will go into recession with likely exception of India, China: UN - Economicbuddy- World Economic News & Financial Tips. The world economy will go into recession this year with a predicted loss of trillions of dollars of global income due to the corona virus pandemic, spelling serious trouble for developing countries with the likely exception of India and China, according to a latest UN trade report. 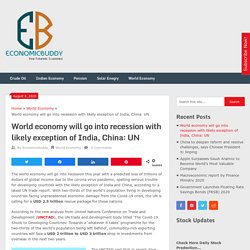 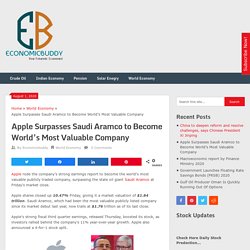 Apple shares closed up 10.47% Friday, giving it a market valuation of $1.84 trillion. Saudi Aramco, which had been the most valuable publicly listed company since its market debut last year, now trails at $1.76 trillion as of its last close. China to deepen reform and resolve challenges, says Chinese President Xi Jinping - Economicbuddy- World Economic News & Financial Tips. Government Launches Floating Rate Bonds (FRSB) 2020 - Economicbuddy- World Economic News & Financial Tips. A bond is a fixed income instrument that represents a loan made by an investor to a borrower. The government is launching the Floating Rate Savings Bonds 2020 (Taxable) scheme from July 01, 2020.

The Floating Rate Savings Bonds 2020 (FRSB Bonds) will have a tenure of 7 years and the interest rate will keep varying during the tenure of the scheme. Currently, the rate of interest has been set at 7.15%The interest rate on these bonds will be reset every six months, the first reset being on January 01, 2021.There is no option to pay interest on cumulative basis i.e. interest will be payable every six months instead of having an option to receive it at maturity. The notes have a minimum subscription of Rs. 1,000 and you can subscribe in multiples of Rs. 1,000.There is no maximum limit for investment in them. Individuals (including Joint Holdings) and Hindu Undivided Families (HUF) are eligible to invest in these bonds.

The bonds are not eligible for trading in the secondary market. Macroeconomic report by Finance Ministry 2020 - Economicbuddy- World Economic News & Financial Tips. India imposed a strict lock - down from 25th March, 2020. April, 2020 was the month of economic standstill with restrictions on various activities eased in May, 2020. As restrictions were further eased, the country entered the unlock phase in June, 2020. Gulf Oil Producer Oman Is Quickly Running Out Of Options - Economicbuddy- World Economic News & Financial Tips. Even before the latest Saudi-instigated oil war crashed oil prices, Oman had a budget breakeven price per barrel of Brent of over US$85, with a senior legal source in Abu Dhabi focussed on the oil industry spoken to by OilPrice.com at that time stating that the Sultanate needed at least US$7 billion ‘very quickly’ to avoid extremely negative financial consequences. Given the twin facts that Oman only has around five billion barrels of estimated proved oil reserves (barely the 22nd largest in the world) but is still dependent on the hydrocarbons sector for over 80 per cent of its national budget revenues, the recent relatively moderate rebound in oil prices has done little to alleviate Oman’s perilous economic position.

Biggest gold scandal busted in China: 83 tons of gold bars used as loan collateral turned out to be copper - Economicbuddy- World Economic News & Financial Tips. China is at the center of the discovery of what may be one of the biggest gold counterfeiting scandal in recent history. According to a report in Zero Hedge, not only does it involve China, but it emerges from a city that has become synonymous for all that is scandalous about China: Wuhan. The 83 tons of purportedly pure gold stored in creditors' coffers by Kingold as of June, backing the 16 billion yuan of loans, would be equivalent to 22 per cent of China's annual gold production and 4.2 per cent of the state gold reserve as of 2019. In short, more than 4 per cent of China's official gold reserves may be fake.

And this assumes that no other Chinese gold producers and jewellery makers are engaging in similar fraud, the report said. GLOBAL ECONOMY OUTLOOK 2020-21 - Economicbuddy- World Economic News & Financial Tips. Global Outlook: Pandemic, Recession: The Global Economy in Crisis. The COVID-19 pandemic has, with alarming speed, delivered a global economic shock of enormous magnitude,leading to steep recessions in many countries.The baseline forecast envisions a 5.2 percent contraction in global GDP in 2020—the deepest global recession in eight decades, despite unprecedented policy support. Per capita incomes in the vast majority of EMDEs are expected to shrink this year. The global recession would be deeper if bringing the pandemic under control took longer than expected, or if financial stress triggered cascading defaults.

The minister was speaking to Daniel Yergin, vice chairman, IHS Markit. “India has 5.3 million metric tons of strategic storage capacity. NTPC Seeks Bidders for EPC Package with Land to Develop 600 MW Solar Capacity - Economicbuddy- World Economic News & Financial Tips. NTPC Limited has floated an invitation for bids (IFB) from contractors for an engineering, procurement, and construction (EPC) package along with land for the development of solar projects up to 600 MW capacities.

Gold prices in India remained choppy throughout the week and ended moderately higher on Friday. June gold futures on MCX rose 0.27% to ₹46,530 per 10 gram. However, silver prices surged on Friday with July futures on MCX rising 3.27% or ₹1,538 to ₹50,096 per kg, tracking a surge in global rates. Domestic gold prices include 12.5% import tax and 3% GST. In India, gold demand remained muted this week due to high local prices while while most jewellery shops remained shuttered due to the corona virus lockdown.

The Home Ministry has announced a phased exit from lockdown from tomorrow though some states have extended the lockdown with some relaxations. Dealers offered discounts of up to $25 an ounce over official domestic prices, Reuters reported. Is China overtaking the US as a financial and economic power? - Economicbuddy- World Economic News & Financial Tips.