Control of Melaleuca Quinquenervia Tree in Florida. Having a background in bush regeneration, spending many years pulling weeds out of the Australian bush, I found it strange to hear about Australian natives causing havoc overseas. 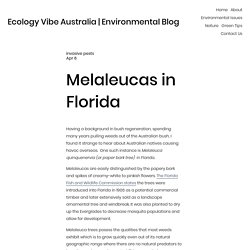 One such instance is Melaleuca quinquenervia (or paper bark tree) in Florida. Melaleucas are easily distinguished by the papery bark and spikes of creamy-white to pinkish flowers. The Florida Fish and Wildlife Commission states the trees were introduced into Florida in 1906 as a potential commercial timber and later extensively sold as a landscape ornamental tree and windbreak. It was also planted to dry up the Everglades to decrease mosquito populations and allow for development.

Melaleuca trees posess the qualities that most weeds exhibit which is to grow quickly even out of its natural geographic range where there are no natural predators to keep its numbers under control. Herbicides can be used for killing individuals or large populations of melaleuca trees. Ecology Vibe Australia — Ecology Vibe Australia. The yellow-tailed black cockatoo is one of six black cockatoos found in Australia. 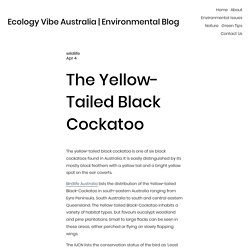 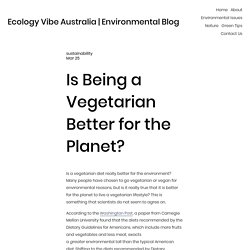 Many people have chosen to go vegetarian or vegan for environmental reasons, but is it really true that it is better for the planet to live a vegetarian lifestyle? This is something that scientists do not seem to agree on. According to the Washington Post, a paper from Carnegie Mellon University found that the diets recommended by the Dietary Guidelines for Americans, which include more fruits and vegetables and less meat, exacts a greater environmental toll than the typical American diet.

Shifting to the diets recommended by Dietary Guidelines for American would increase energy use by 38 percent, water use by ten percent and greenhouse gas emissions by six percent, according to the paper. This is thought to be because a healthy diet which includes larger amounts of fruits, vegetables, dairy products and fish have relatively large environmental impacts when compared to some foods in our current diet such as foods with added sugars. 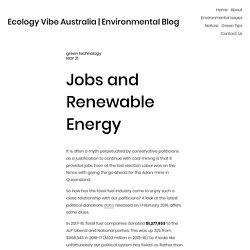 Even at the last election Labor was on the fence with giving the go ahead for the Adani mine in Queensland. So how has the fossil fuel industry come to enjoy such a close relationship with our politicians? A look at the latest political donations data, released on 1 February 2019, offers some clues. In 2017-18, fossil fuel companies donated $1,277,933 to the ALP, Liberal and National parties.

This was up 32% from $968,343 in 2016-17 ($1.03 million in 2015-16). While granted there are still quite a few people employed in mining, all that is needed is a smooth transition to renewable energy where there could be even more jobs created. Ecology Vibe Australia — Ecology Vibe Australia. The Lower Darling was subject to tragic fish death events in December 2018 and January 2019. 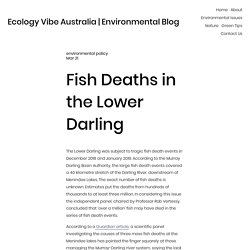 According to the Murray Darling Basin Authority, the large fish death events covered a 40 kilometre stretch of the Darling River, downstream of Menindee Lakes. The exact number of fish deaths is unknown. Estimates put the deaths from hundreds of thousands to at least three million. In considering this issue the independent panel, chaired by Professor Rob Vertessy, concluded that ‘over a million’ fish may have died in the series of fish death events. According to a Guardian article, a scientific panel investigating the causes of three mass fish deaths at the Menindee lakes has pointed the finger squarely at those managing the Murray-Darling river system, saying the lack of flows was caused by a combination of drought and over-extraction, leading to the environmental disaster. 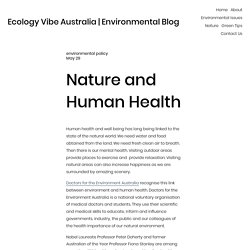 We need water and food obtained from the land. We need fresh clean air to breath. Then there is our mental health. Visiting outdoor areas provide places to exercise and provide relaxation. Visiting natural areas can also increase happiness as we are surrounded by amazing scenery. Doctors for the Environment Australia recognise this link between environment and human health. Nobel Laureate Professor Peter Doherty and former Australian of the Year Professor Fiona Stanley are among more than 180 health professionals and leading health groups who have signed an open letter, warning the federal government must strengthen Australia’s weak environment laws to protect health.

The letter goes on to state the COVID-19 pandemic is thought to have originated in pathogens from other species, as with other infectious diseases before it such as Ebola, SARS and Hendra virus. Ecology Vibe Australia — Ecology Vibe Australia. Greenpeace cites the Amazon rainforest is the world's largest intact forest. 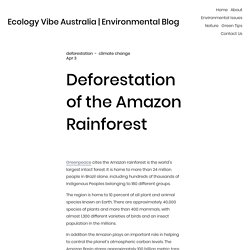 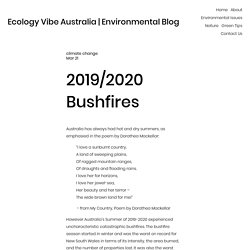 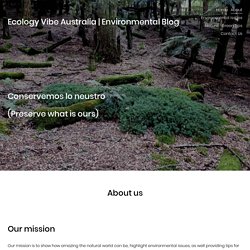