Jeff C. Palmer is a teacher, success coach, trainer, Certified Master of Web Copywriting and founder of Jeff is a prolific writer, Senior Research Associate and Infopreneur having written many eBooks, articles and special reports.

Achieving Schooling Success For Each Student. A major and pressing problem facing educators, particularly in the context of the current national agenda of achieving schooling success for each student, is the consistent finding of differential correlation among low, mid-range, and high academic achievement in different groups of ethnic minority students. 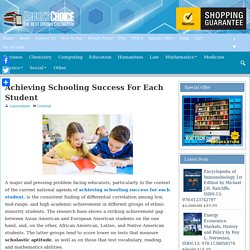 The research base shows a striking achievement gap between Asian American and European American students on the one hand, and, on the other, African American, Latino, and Native American students. The latter groups tend to score lower on tests that measure scholastic aptitude, as well as on those that test vocabulary, reading, and mathematics abilities. This gap, which appears early in life and persists into adulthood, cannot simply be attributed to race, however.

Traditional explanations for the gap, such as social-environmental and genetic-hereditary causes, have not gone far in understanding and closing the achievement gap. Alternative Approaches To Educational Leadership. Glossary of Educational Terminology. Ever wondered what educators mean when they refer to “constructivism” or “multicultural education”? 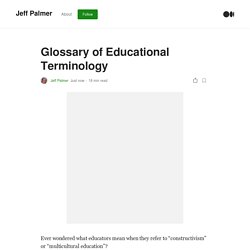 Parents, teachers, and the general public don’t always speak the same language. But, even when we do, what we mean by a word or phrase is not always the same. On the following pages we offer explanations for some terms used by educators and/or social change activists. ability grouping — A common instructional practice of clustering students according to their academic skills. Ability grouping allows a teacher to provide the same level of instruction to the entire group. Accreditation — The process by which an organization, usually the National Council for the Accreditation of Teacher Education, sanctions teacher-education programs. Teachers Of The 21st Century Must Be Prepared To Maximize The Learning Of All Children. The information age poses a whole new set of challenges and questions to America’s schools. 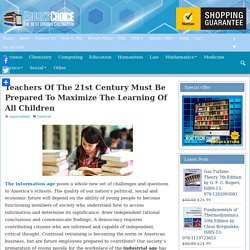 The quality of our nation’s political, social and economic future will depend on the ability of young people to become functioning members of society who understand how to access information and determine its significance, draw independent rational conclusions and communicate findings. A democracy requires contributing citizens who are informed and capable of independent, critical thought. Continual retraining is becoming the norm in American business, but are future employees prepared to contribute? Our society’s preparation of young people for the workplace of the industrial age has been insufficient. While the nature and strength of our national economy is not the only driving force for school reform, it is a powerful one. Vision, Commitment and Leadership In Education. Many educators, policymakers, Republicans and Democrats are now talking reasonably about the future of education. 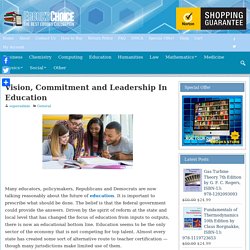 It is important to prescribe what should be done. The belief is that the federal government could provide the answers. Trends For Post-Secondary Education Opportunities. To maintain higher education opportunities, particular for low- and middle-income students, increased resources must be made available to students through financial aid programs to meet the higher tuitions. 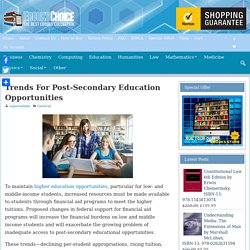 Proposed changes in federal support for financial aid programs will increase the financial burdens on low and middle income students and will exacerbate the growing problem of inadequate access to post-secondary educational opportunities. These trends—declining per-student appropriations, rising tuition, and growth in the population of college age persons—have disturbing implications for the states. At the same time, the African American population as a percentage of the college-age population is rising rapidly. High school dropout rates are appalling. The African American students who are disproportionately poor and low-income, face significant financial barriers to attendance—another pressure for increased spending, not reduced.

Principle 1. Principle 2. Principle 3. Principle 4. The Discussion Of Education In America Must Move To A Higher Level. Public education was created in part to be one of the mediating institutions that would mold the American character one citizen at a time. 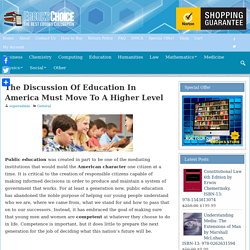 It is critical to the creation of responsible citizens capable of making informed decisions in order to produce and maintain a system of government that works. For at least a generation now, public education has abandoned the noble purpose of helping our young people understand who we are, where we came from, what we stand for and how to pass that on to our successors. Instead, it has embraced the goal of making sure that young men and women are competent at whatever they choose to do in life.

Challenges and Opportunities to Foster School Success. Three actualities emerging from recent research indicate that we must focus concentrated attention on low-income children before they enter school: (a) poverty among young children is becoming more intense; (b) poverty coupled with other risk factors, such as chronic neighborhood violence and high stress from urban living, places young children at great risk of negative outcomes; and (c) early intervention with both children and their families can mitigate the effects of poverty and other risk factors and can enhance learning-related outcomes. 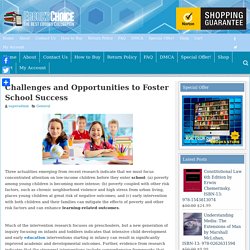 Much of the intervention research focuses on preschoolers, but a new generation of inquiry focusing on infants and toddlers indicates that intensive child development and early education interventions starting in infancy can result in significantly improved academic and developmental outcomes. The common perception of inner cities is that they are communities without resources, impaired by poverty and neglect. Source: Educational And Developmental Resilience. Nothing can be counted as progress in a community until the children and youth are well-served and show healthy development and steady, sustained advances in learning. 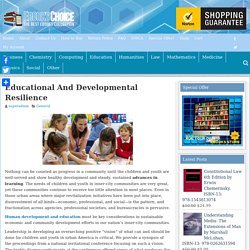 The needs of children and youth in inner-city communities are very great, yet these communities continue to receive too little attention in most places. Even in those urban areas where major revitalization initiatives have been put into place, disinvestment of all kinds—economic, professional, and social—is the pattern, and fractionation across agencies, professional societies, and bureaucracies is pervasive. Local School-To-Work Partnerships. The School-to-Work (STW) partnership model is based on the idea that there are significant economies of scale in the provision of STW programming and therefore that groups of districts working together on relatively large projects will accomplish more than single districts working by themselves on smaller projects. 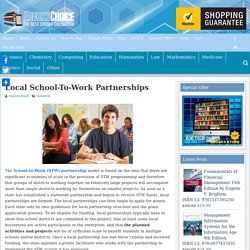 As soon as a state has established a statewide partnership and begun to receive STW funds, local partnerships are formed. The local partnerships can then begin to apply for grants. Each state sets its own guidelines for local partnership structure and the grant application process. To be eligible for funding, local partnerships typically have to show that school districts are committed to the project, that at least some local businesses are active participants in the enterprise, and that the planned activities and projects will be of sufficient scale to benefit students in multiple schools and/or districts. Establishing Educator in the Workplace Opportunities Source: Improving Access To Postsecondary Education.

An array of family, school and community characteristics clearly work together in shaping students’ access to postsecondary education. 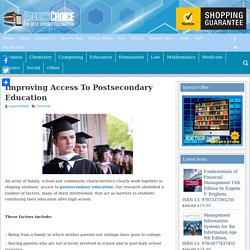 Our research identified a number of factors, many of them interrelated, that act as barriers to students continuing their education after high school. These factors include: The Role Of Education Leaders In Establishing Sound Prevention Practices. We are all invested in the creation of safe and drug-free schools. As parents kiss their children good-bye in the morning, they want to know that their kids will return safely to them that afternoon. All teachers and principals want to enter their school building each day knowing that it will be a full day for education. Every superintendent wants the same thing: a safe institution where students, teachers, and principals can get down to the business of education.

But the reality is that a host of inappropriate, disruptive, sometimes violent incidents occur annually. Statistics reveal incidents in which teachers were the victim, guns brought to school and uncounted acts of bullying, teasing, hazing, and physically nonviolent behavior. Parental Practices Are Better Predictors Of Student Achievement. Forty years of research have shown that family involvement in education is one of the most powerful predictors of student success in school. Yet many high-poverty schools still have low levels of parent involvement and experience little success in their efforts to increase it. Students from high-poverty families are also less likely to spend time at home on learning-related activities that reinforce their schoolwork. Charter Schools Are Not The Lite Version Of Conventional Public Schools. Although we hail charter schools as a promising reform, the creation of these publicly financed but (mostly) independent schools remains one of the fiercest battlegrounds in U.S. education.

Since many states today have statutes authorizing such schools, however, the fight is no longer about whether any should exist. The front line in the battle has shifted to whether these schools will be free to demonstrate the power of this idea. Charter Schools Are Not The Lite Version Of Conventional Public Schools. The Impulse To Widen College Access Continues Unabated. An Ongoing Priority For American Education.

The concept of a cognitive apprenticeship can be successfully applied to early childhood instruction. An ongoing priority for American education is the systemic reform of urban schools to better meet the needs of an increasingly diverse student population. Supporting School-Community Collaborations. The Most Effective And Inclusive Styles Of Educational Leadership. Early Learning Experiences. Leadership Advocacy For Early Childhood Education. Early childhood development and education has been a major topic of discussion and planning at all levels—federal, state, and local communities — not only because of the widespread recognition of the research base on the importance of early development to long-term schooling success, but as a critical national investment strategy for the future of the nation in the 21st Century global economy.

Are The Elected Officials Aware Of The Wide Range Of Important Education Issues? Public education is one of the most important institutions in our country, an institution in which the public has always played a role. Better Academic Outcomes In Small Schools. Small schools have great variety. We learned that we don’t need standardized schools –- that kills the soul! In Chicago we saw fabulous small schools that were Afro-centric, schools that focused on phonics, fabulous small schools about whole language, small schools that are using the city as a place to investigate. Why? Because they were small, they were focused and they beat the odds on academic outcomes. Small schools are the single most powerful intervention that we can imagine for young people. Summary of Grade Retention Effects. The Short-Term Academic Achievement Of Retained Students. In this era of accountability, many school systems have begun taking a harder line with regard to promotion policy, retaining students who do not make sufficient academic progress-particularly in reading and math.

In many cases, the decision to retain a student is based on student performance on high-stakes standardized tests. These Are The Days Of Home-School Partnerships. Grade Retention Is A Response To Academic Problems. Years after being retained, students have significantly lower achievement than similar students who were not retained. Many retained students never catch up to their promoted same-age peers with similarly low test scores. Whatever performance advantage retained students have over their younger, same grade peers is short-lived, as they typically fall behind these students after one or two years. Teaching Strategies That Have Been Proven Successful. Developing Schoolwide Vision and Implementing Strategic Plans. Collaborative Relationships Between Schools And Their Communities. Doing A Good Job In Preparing Students For College.

Implementation Of School Reform Models. Leadership In Education. Leadership in education has so many… The Effectiveness Of Academic Standards. Instructional Strategies For Science Teaching. Targeted Recruitment Efforts And Specific Hiring Strategies For New Teachers. New Teachers Commend Principals Who Are Instructional Leaders. A Right To Data Is Meaningless Without Knowledge Of What Is Available. We Consider Open Data To Be Part Of A Broader Trend. New Teachers Are Drawn To The Profession By A Strong Desire To Teach.