2014 AIGA Medalist: David Carson. Recognized for breaking the rules, nearly untethering legibility from communication and inspiring a generation of young designers with his bold understanding of cultural style. 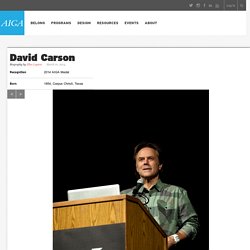 Typography spun into a whirling end-of-century gyre in the 1990s, and David Carson was at its center. The incendiary pages of Ray Gun magazine inflamed the eyes and minds of countless young designers who sought to tap into the freedoms unlocked by his bold new style. Carson shaped everything in his path for his own purposes, endlessly contorting type, layout and grid into new configurations and abandoning design’s established truths of order and legibility. He represented a new breed of visual author. In 1980, Carson was a 26-year-old high school teacher in southern Oregon. By the early 1990s, digital tools were colliding with Modernism’s exploded vocabulary.

Sally Mann. Biography Sally Mann is an American photographer known for her intimate black-and-white portraits of her family and for her documentation of the landscape of the American South. 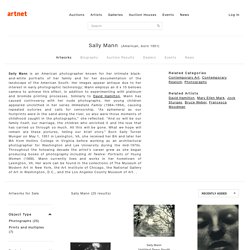 Her images appear antique due to her interest in early photographic technology; Mann employs an 8 x 10 bellows camera to achieve this effect, in addition to experimenting with printing processes that include platinum and bromide. Similarly to David Hamilton, Mann has caused controversy with her nude photographs. Her young children appeared unclothed in her series Immediate Family (1984–1994), causing repeated outcries and calls for censorship.

The 22 Best Photo Essays Of 2015. Our new president—who continues to insist without supporting facts that massive voter fraud cost him the popular vote—announced his intention this week of moving forward on one of his signature campaign promises: the construction of a massive border wall with Mexico. 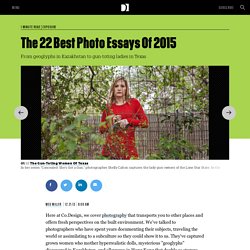 A year ago, when he began parading around this ludicrous idea during the early debates, most people (most sane people, and even a few Republicans), didn’t take him seriously. This was obviously a stunt, being promoted by a carnival barker/reality TV star, whose chances of securing the nomination seemed remote at best. Welcome to the Twilight Zone. At this point, it’s unclear how all of this will all shake out. The construction of a border wall is a massive capital project, requiring billions of dollars. So, let’s assume the worst: Some version of a border wall is likely to be constructed. Wwd. Students learn sustainable design. Lululemon CEO talks candidly about looming athleisure bubble, Chip Wilson. Indeed, analysts commended the retailer's gross margin improvement during the first quarter, even though this metric still contracted during the period. 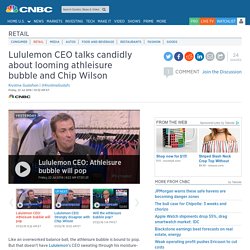 Margins were helped by improvements to its supply chain — including cutting back on its use of air freight. The company expects its gross margin to turn positive during the current three-month period, after clearing through excess inventory in the prior quarter. Potdevin reiterated the company's five-year plan to double its revenue and profitability by 2020, saying international expansion and growth in its menswear business should help it achieve its goals. He likewise repeated that he sees the men's category growing into a billion-dollar business — more than double what it is today, according to Jefferies.

How women aged over 50 shop for fashion: EBSCOhost. The amount women in their fifties spend on clothes is nearly £7bn and rising, but they are much more diverse than younger shoppers, requiring a distinct marketing tack It is a criticism often levelled at fashion brands that their marketing communications are overwhelmingly skewed towards the younger end of the market. 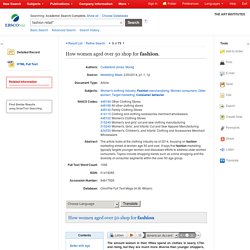 Yet research by Kantar Worldpanel suggests that it is an older generation that is driving growth in womenswear. Will this mean that marketers should be making overtures to this otherwise seemingly neglected demographic? The over 50s contribute £300bn to the UK economy annually, according to Age UK figures from this month; Saga notes that the age group accounts for almost half of UK incomes, for example. It is clear that this segment, while affected by the financial crisis like other segments, has money to spend. This is reflected in the study, which notes that spending from 50+ women contributed 4.5 per cent more in 2013 than in 2012. Better with age. AIGA Design Archives. Wwd. Diane von Furstenberg Supports Fashion Targets Breast Cancer Campaign. The campaign is in the midst of its annual fundraising drive Fashion designer Diane von Furstenberg has given her support to the Fashion Targets Breast Cancer (FTBC) Campaign. 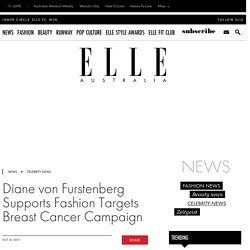 The organisation has just launched its annual fundraising drive, with a Fashion Targets Breast Cancer t-shirt designed by Karen Walker. Proceeds from the sale of the tee will go to the Garvan Institute of Medical Research, Australia's leading biomedical research institute, and will be used for new techniques and studies in breast cancer research.

For von Furstenberg, the campaign is a particularly important one. "Fashion Targets Breast Cancer is such a powerful organisation and one that is very close to my heart," she told ELLE.com.au. "Over the past twenty years, it has been able to raise a tremendous amount of awareness and funds all over the world. Currently 1 in 9 women will be diagnosed with breast cancer, and it is the most common cancer in women. @FTBC_au #wearyoursupport.