The Nature of Consciousness: How the Internet Could Learn to Feel - Steve Paulson. "Romantic reductionist" neuroscientist Christof Koch discusses the scientific side of consciousness, including the notion that all matter is, to varying degrees, sentient. 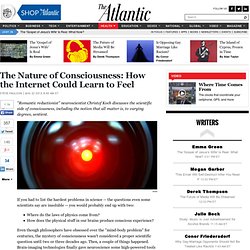 If you had to list the hardest problems in science -- the questions even some scientists say are insoluble -- you would probably end up with two: Where do the laws of physics come from? How does the physical stuff in our brains produce conscious experience? Even though philosophers have obsessed over the "mind-body problem" for centuries, the mystery of consciousness wasn't considered a proper scientific question until two or three decades ago.

Tinnitus Miracle™ - Cure Tinnitus Holistically. By Thomas Coleman- Nutrition Specialist, Health Consultant, Medical Researcher and Author Dear Tinnitus Sufferer, You're about to discover what might be the most powerful tinnitus cure system ever developed. 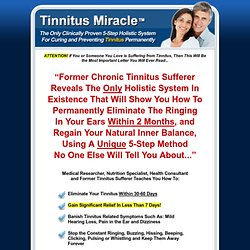 It's the same system thousands of men and women, just like you, have used to permanently cure their tinnitus and achieve permanent freedom from the ringing in their ears. My name is Thomas Coleman and over the past 14 years, through a long process of trial, error and experimentation, I have developed a sure-fire, clinically researched system that is backed by 45,000+ hours of intense medical research for eliminating tinnitus for good. Major Federal Health Official Admits to Congress That Prohibition Has Harmed Research Into Marijuana's Benefits. Anti-Vaxxers Say "You Vaccinate, So We Don't Have To!" Study Proves Vaccines — Not ‘Vaccine Refusers’ — Are Behind Whooping Cough Outbreaks. (Melissa Melton via The Daily Sheeple) A new study published in Proceedings of the National Academy of Sciences shows that the whooping cough vaccines that have been in use since the 1990s — and not kids whose parents refuse the whooping cough vaccine — are actually behind the surge in whooping cough outbreaks across the U.S. 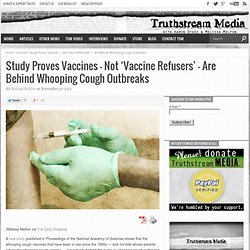 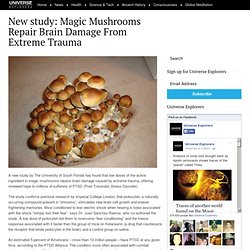 The study confirms previous research by Imperial College London, that psilocybin, a naturally occurring compound present in “shrooms”, stimulates new brain cell growth and erases frightening memories. Mice conditioned to fear electric shock when hearing a noise associated with the shock “simply lost their fear”, says Dr. Juan Sanchez-Ramos, who co-authored the study. A low dose of psilocybin led them to overcome “fear conditioning” and the freeze response associated with it faster than the group of mice on Ketanserin (a drug that counteracts the receptor that binds psilocybin in the brain) and a control group on saline. Woops! Study Accidentally Finds Chemotherapy Makes Cancer Far Worse. A team of researchers looking into why cancer cells are so resilient accidentally stumbled upon a far more important discovery. While conducting their research, the team discovered that chemotherapy actually heavily damages healthy cells and subsequently triggers them to release a protein that sustains and fuels tumor growth .

Beyond that, it even makes the tumor highly resistant to future treatment . Reporting their findings in the journal Nature Medicine , the scientists report that the findings were ‘completely unexpected’. Marijuana Facts: 11 Facts about Marijuana you didn't know ←FACTSlides→ Natural health news. Thousands of citizens in India killed by reckless Big Pharma drug trials. (NaturalNews) The second largest country in the world, India, has become a hotbed of pharmaceutical fraud, as unscrupulous drug companies, mostly from the West, continue to use India's generally poorer populations as human guinea pigs in unethical and flat-out inhumane clinical trials. 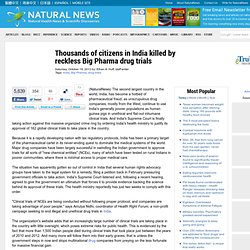 And India's Supreme Court is finally taking action against this massive organized crime ring by ordering India's health ministry to justify its approval of 162 global clinical trials to take place in the country. Merck vaccine developer admits vaccines routinely contain hidden cancer viruses derived from diseased monkeys. (NaturalNews) If you haven't yet realized the truth about how vaccines contain hidden cancer viruses, prepare yourself to be shocked by the admission you're about to hear. 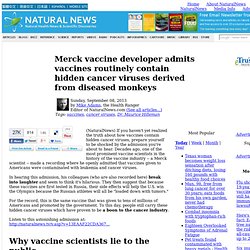 Decades ago, one of the most prominent vaccine scientists in the history of the vaccine industry -- a Merck scientist -- made a recording where he openly admitted that vaccines given to Americans were contaminated with leukemia and cancer viruses. Sea salt and baking soda, best all natural remedy for curing radiation exposure and cancer. If you have been exposed to any form of radiation, either for medical diagnostic purposes (fluoroscopy / mammography / other medical x-ray exams) or in the course of radiotherapy treatment, or if you are otherwise concerned by excessive radiation exposure, overload or poisoning (such as living near a nuclear reactor facility, working with diagnostic radiological equipment / in the nuclear processing industries / uranium mining / uranium or plutonium processing), or if you have been exposed to radioactive particles or higher ionizing radiation doses stemming from other sources such as depleted uranium (DU), testing of atomic weapons, frequent flights in higher altitudes, a nuclear disaster (radiation fallout from the Japan nuclear power plants) etc., If you are having any kind of radiation treatments, macrobiotic is the cure. 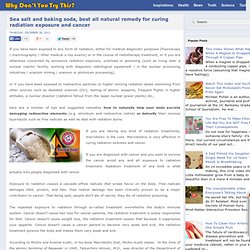 Macrobiotics is very effective in curing radiation sickness and cancer. Exposure to radiation causes a cascade offree radicals that wreak havoc on the body. Dr.