Seymour Papert inventor of everything Gary Stager at TEDxASB1. Seymour Papert: Project-Based Learning. An expert on children and computing, Dr. 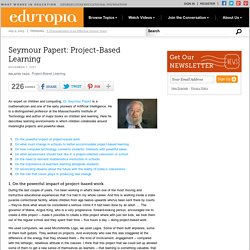 Seymour Papert is a mathematician and one of the early pioneers of Artificial Intelligence. He is a distinguished professor at the Massachusetts Institute of Technology and author of major books on children and learning. Here he describes learning environments in which children collaborate around meaningful projects and powerful ideas. 1. On the powerful impact of project-based work. During the last couple of years, I've been working in what's been one of the most moving and instructive educational experiences that I've had in my whole career.

We used computers, we used MicroWorlds Logo, we used Legos. Back to Top 2. Well, first thing you have to do is to give up the idea of curriculum. If, for example, this Lego stuff is why a lot of kids love building robotic kinds of things and programming -- and they love doing that -- and you can connect that work to all the powerful ideas that are important for kids to know. 3. 4. 5. Seymour Papert’s Legacy: Thinking About Learning, and Learning About Thinking. Paulo Blikstein (Stanford University) If a historian were to draw a line connecting Jean Piaget’s work on developmental psychology to today’s trends in educational technology, the line would simply be labeled “Papert.” 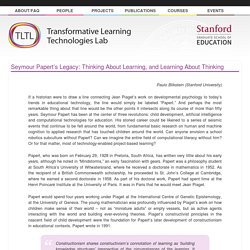 And perhaps the most remarkable thing about that line would be the other points it intersects along its course of more than fifty years. Seymour Papert has been at the center of three revolutions: child development, artificial intelligence and computational technologies for education. His storied career could be likened to a series of seismic events that continue to be felt around the world, from fundamental basic research on human and machine cognition to applied research that has touched children around the world. Can anyone envision a school robotics subculture without Papert? Papert, who was born on February 29, 1928 in Pretoria, South Africa, has written very little about his early years, although he noted in “Mindstorms,” an early fascination with gears.

Papert.pdf. Bode Miller: World's Most Creative Skier. By Seymour Papert What I love about the Olympics is that they can be seen in many different ways: an affirmation of peace and internationalism; the pure joy of superb human performance; the less pure, but very human, identification with "our" athletes. 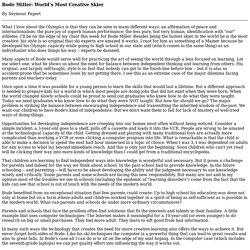 I'll be on the edge of my chair this week for Bode Miller. Besides being the fastest skier in the world he is the most creative: his style is so original that ski experts are amazed it works. I root for him as something of a Mainer because he developed his Olympic capacity while going to high school in our state and (which comes to the same thing) as an individualist who does things his way -- experts be damned. 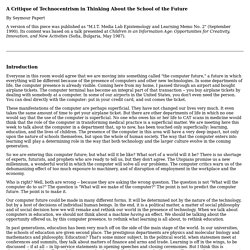 Media Lab Epistemology and Learning Memo No. 2" (September 1990). Its content was based on a talk presented at Children in an Information Age: Opportunities for Creativity, Innovation, and New Activities (Sofia, Bulgaria, May 1987). Introduction Everyone in this room would agree that we are moving into something called "the computer future," a future in which everything will be different because of the presence of computers and other new technologies. These manifestations of the computer are perhaps superficial. So we are entering this computer future; but what will it be like? Who is right? Our computer future could be made in many different forms. In past generations, education has been very much off on the side of the main stage of the world.