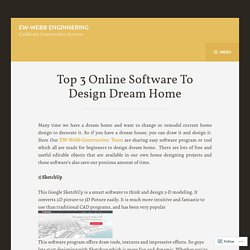 So if you have a dream house, you can draw it and design it. Here Our EW-Webb Construction Team are sharing easy software program or tool which all are made for beginners to design dream home. There are lots of free and useful editable objects that are available in our own home designing projects and these software’s also save our precious amount of time. 1) SketchUp This Google SketchUp is a smart software to think and design 3-D modeling. This software program offers draw tools, textures and impressive effects. 2) Autodesk Revit Autodesk Revit software program offers valuable tools that support structural engineering, architectural design and building construction. 3) Softplan Softplan software is too easy to use that can help you on all your designing requirements.

Famous 5 Weird Buildings in The World – EW-Webb Enginnering. Atomium (Brussels, Belgium) The Atomium, symbol of Brussels and Belgium, is an international tourist attraction. 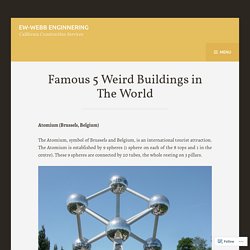 The Atomium is established by 9 spheres (1 sphere on each of the 8 tops and 1 in the centre). These 9 spheres are connected by 20 tubes, the whole resting on 3 pillars. Most Popular Architectural Home Style Designs – EW-Webb Enginnering. Every house has an own style. 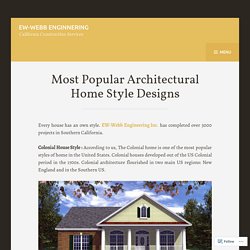 EW-Webb Engineering Inc. has completed over 3000 projects in Southern California. Colonial House Style : According to us, The Colonial home is one of the most popular styles of home in the United States. Colonial houses developed out of the US Colonial period in the 1700s. Colonial architecture flourished in two main US regions: New England and in the Southern US. Cape Cod House Style : The modern day Cape Cod houses you see in nearly every part of North America are modeled after the rugged architecture of Colonial New England. Features of Traditional, Colonial-era Cape Cod Houses Steeply pitched roof with side gablesNarrow roof overhang1 or 1½ storiesConstructed of wood and sided in wide clapboard or shinglesExterior siding originally left unpaintedLarge central chimney linked to a fireplace in each roomRectangular shapeFront door placed at the center or, in some cases, at the sideCenter-hall floor planMulti-paned, double-hung windows. 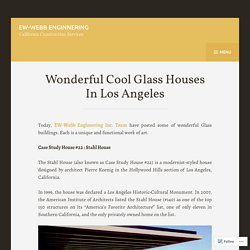 Team have posted some of wonderful Glass buildings. Each is a unique and functional work of art. Case Study House #22 : Stahl House The Stahl House (also known as Case Study House #22) is a modernist-styled house designed by architect Pierre Koenig in the Hollywood Hills section of Los Angeles, California. In 1999, the house was declared a Los Angeles Historic-Cultural Monument. 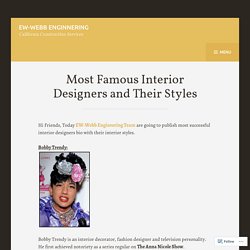 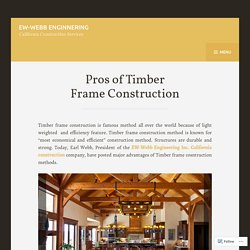 Everyone has their own personal choice so final decision is up to you what do you like in your home. 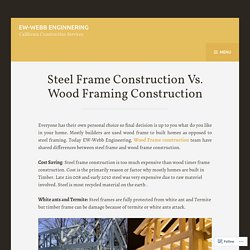 Mostly builders are used wood frame to built homes as opposed to steel framing. Today EW-Webb Engineering, Wood Frame construction team have shared differences between steel frame and wood frame construction. Cost Saving: Steel frame construction is too much expensive than wood timer frame construction. Cost is the primarily reason or factor why mostly homes are built in Timber. Late 2in 008 and early 2010 steel was very expensive due to raw materiel involved. White ants and Termite: Steel frames are fully protected from white ant and Termite but timber frame can be damage because of termite or white ants attack. Environment Friendly: Steel is most recycled material on the earth and timber is the ultimate renewable resource. 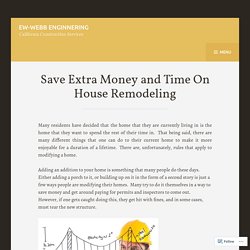 That being said, there are many different things that one can do to their current home to make it more enjoyable for a duration of a lifetime. There are, unfortunately, rules that apply to modifying a home. Adding an addition to your home is something that many people do these days. Either adding a porch to it, or building up on it in the form of a second story is just a few ways people are modifying their homes. Many try to do it themselves in a way to save money and get around paying for permits and inspectors to come out. In order to avoid the additional costs of fines and having to pay for re-doing the project along with the cost of having to tear down what has already been done, one hires a structural engineer. People balk at the cost of hiring a structural engineer. Design Your Home Dreams With EW-Webb Engineering – EW-Webb Enginnering.

Most Eminent Art Museums Of All Time – EW-Webb Enginnering. Today, EW-Webb Engineering Team have published one blog on most famous Museum Buildings. 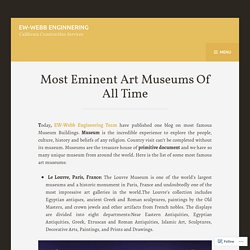 Museum is the incredible experience to explore the people, culture, history and beliefs of any religion. Country visit can’t be completed without its museum. Museums are the treasure house of primitive document and we have so many unique museum from around the world. Here is the list of some most famous art museums: Le Louvre, Paris, France: The Louvre Museum is one of the world’s largest museums and a historic monument in Paris, France and undoubtedly one of the most impressive art galleries in the world.The Louvre’s collection includes Egyptian antiques, ancient Greek and Roman sculptures, paintings by the Old Masters, and crown jewels and other artifacts from French nobles.

J. The Acropolis Museum, Athens, Greece: The Acropolis Museum was founded in 2001 but Organisation of the Museum was established in 2008 and it is focused on the findings of the archaeological site of the Acropolis of Athens. World Famous Most Expensive Buildings – EW-Webb Enginnering. Today, EW-Webb Engineering Inc. have published blog on most interesting topic “The Most Expensive Buildings In The World”. 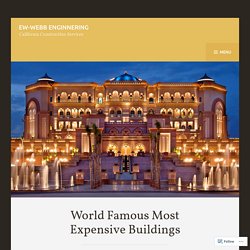 The Marina Bay Sands Resort: Marina Bay Sands is an Integrated Resort fronting Marina Bay in Singapore.Developed by Las Vegas Sands, it is billed as the world’s most expensive standalone casino property at S$4 billion, including cost of the prime land.The grand opening of Marina Bay Sands was held on 17 February 2011.It also marked the opening of the seven celebrity chef restaurants.The highly anticipated Broadway musical The Lion King debuted on 3 March 2011.The last portion of the Marina Bay Sands, the floating pavilions, were finally opened to the public when the two tenants, Louis Vuitton and Pangaea Club, opened on 18 and 22 September 2011 respectively.

McCarran International Airport, Curtain wall systems, Las Vegas, Werner Systems Cinerama Dome Hollywood, Exterior cladding, Werner Systems FDA Building, Curtain wall system, Irvine, Werner Systems Amanda Busby, Cadd Designer. Industrial Building & Residential Home Construction: EW-Webb. Our Services Wood Frame Specialists Over ninety percent of the firm's projects have been wood-framed. Earl Webb, president of the company, says that the emphasis in development of their computer methods has been directed toward the fast and accurate production of calculations for wood frame buildings. "We also perform a great deal of designs for masonry, most in conjunction with our Type V projects. We have the capability to design any material for any use. " Riverside Wood Frame & Civil Construction California: EW-Webb.