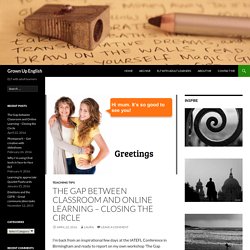 The workshop looked at the Common European Framework of Reference and ways in which its descriptors can be used to link online activities to classroom tasks. The topics that interest me most at the moment, as well as all things tech, are task-based learning and communicative language teaching. The Stanford professor who pioneered praising kids for effort says we’ve totally missed the point. On a bitingly cold winter’s day in 2013, a woman whom I’ll call Laurie took me to the terrace of a tall building in a city about two hours west of London, England. 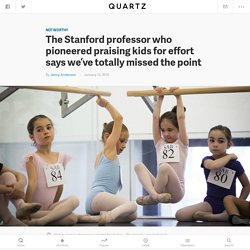 Years earlier, she’d tried to jump from the terrace and kill herself. It had been a harrowing time for Laurie. She’d started hearing voices in her head and often felt as if an outside force was controlling her. She attributed her suicide attempt to this outside force. “I wasn’t the one making that decision,” she told me. The Stanford professor who pioneered praising kids for effort says we’ve totally missed the point. A Global Approach to Teaching Phrasal Verbs. Teachers and learners tend to perceive Phrasal Verbs as difficult to learn, particularly as they seem to have so many alternative meanings, yet they are among the first verbs acquired by native speaker children. 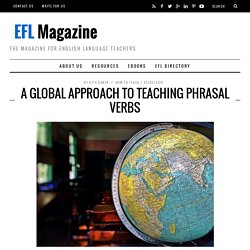 You’ve probably encountered them in traditional lists as discrete items of vocabulary, often paired with their Latin cognates, e.g. come back / return, as a massive load to be learnt by heart. Happily, there is a much better solution, requiring a complete shift in approach. Main - TeachThought. Webinars. The Difference Between Technology Use And Technology Integration. Bring TeachThought Professional Development To Your School! 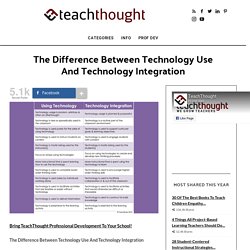 The Difference Between Technology Use And Technology Integration by TeachThought Staff Using technology for learning makes sense. Technology creates access, transparency, and opportunity. Any smartphone or tablet is media incarnate–video, animation, eBooks, essays, blog posts, messages, music, games. Teaching Digital Wisdom. Eliciting both passion and bloviating, the topic of appropriate technology use in the college classroom is sure to spark lively conversation among college instructors. While more and more institutions are requiring at least some use of course management tools like Blackboard and Moodle, instructors still can decide whether to incorporate technology and digital pedagogy into their classrooms.

Some choose to give traditional lectures and allow their students full use of laptops and the Internet (see David von Schlichten). Others allow no laptops or cell phones in the classroom (see Hinda Mandell). Because I study technology and new media, colleagues will often ask about my classroom practices. Their initial questions, though, are exactly that: about practice rather than philosophy, about what rather than why. Introducing Digital Wisdom Forming Collaborative Relationships with Peers. Getting in the flow in learning a language. Are you in the flow? 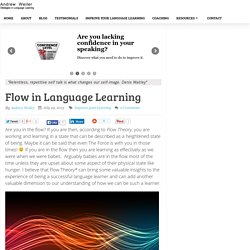 If you are then, according to Flow Theory, you are working and learning in a state that can be described as a heightened state of being. Maybe it can be said that even The Force is with you in those times! If you are in the flow then you are learning as effectively as we were when we were babes. Arguably babies are in the flow most of the time unless they are upset about some aspect of their physical state like hunger. I believe that Flow Theory* can bring some valuable insights to the experience of being a successful language learner and can add another valuable dimension to our understanding of how we can be such a learner. Example Lesson Plans. Widodo. Presentations 2Go Player. Keynotes (14-16) - TESOLacademic.org. Keynotes (08-10) - TESOLacademic.org. Keynotes (11-13) - TESOLacademic.org. AdamScott_TECIndiaBeginnersPresentation-Final.pdf. Concept Mapping. ClassDojo. Starter collection.

Alltop - Top Linguistics News. Paul Stacey. The pedagogical foundations of massive open online courses. Seminars. How to use this handbook. This document is a practical guide to co-learning, a living document that invites comment and invites readers to join the community of editors. 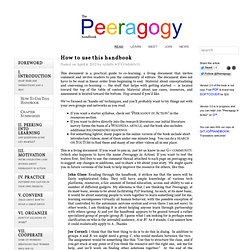 Huw Jarvis on MALU. This was the first of many IATEFL talks relating to technology this year in Liverpool. 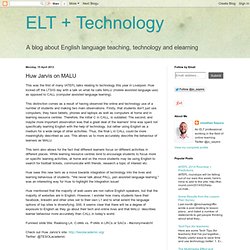 Huw kicked off the LTSIG day with a talk on what he calls MALU (mobile assisted language use) as opposed to CALL (computer assisted language learning). This distinction comes as a result of having observed the online and technology use of a number of students and making two main observations. Firstly, that students don't just use computers; they have tablets, phones and laptops as well as computers at home and in learning resource centres. Therefore, the initial C in CALL, is outdated. The second, and maybe more important observation was that a great deal of the learners' time was spent not specifically learning English with the help of technology, but rather using English as a medium for a wide range of other activities.

This term also allows for the fact that different learners focus on different activities in different places. Zeitguest: Don’t cover the syllabus, UNCOVER it… by David Mearns. 4 threads in 6 mins. How We Learn What We Learn.