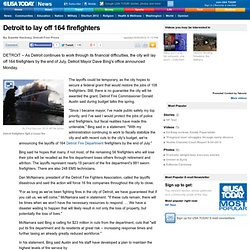 The layoffs could be temporary, as the city hopes to secure a federal grant that would restore the jobs of 108 firefighters. Still, there is no guarantee the city will be awarded the grant, Detroit Fire Commissioner Donald Austin said during budget talks this spring. "Since I became mayor, I've made public safety my top priority, and I've said I would protect the jobs of police and firefighters, but fiscal realities have made this untenable," Bing said in a statement. "With my administration continuing to work to fiscally stabilize the city and with recent cuts to the city's budget, we're announcing the layoffs of 164 Detroit Fire Department firefighters by the end of July. " In his statement, Bing said Austin and his staff have developed a plan to maintain the highest levels of fire service by: 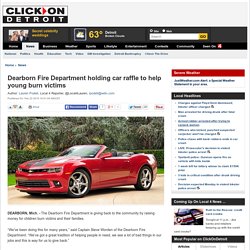 “We’ve been doing this for many years,” said Captain Steve Worden of the Dearborn Fire Department. “We’ve got a great tradition of helping people in need, we see a lot of bad things in our jobs and this is way for us to give back.” The 2015 Dearborn Firefighters Burn Drive Car Raffle is underway. 1st Prize: 2015 Camaro SS Convertible or $40,000 cash option 2nd Prize: $3,000 Vegas Trip 3rd Prize: 50” Flat Screen TV Raffle tickets are available at all Dearborn fire stations and include admission to the drawing party with open bar, food and entertainment and a chance to win even more prizes.

Drawing Party: April 28 at 6 p.m. at the Hubbard Ballroom in Dearborn’s Ford Community & Performing Arts Center. As Detroit breaks down, scourge of arson burns out of control. July 13, 2013|Steve Neavling | Reuters (Reuters) - On the night of July 4, some Detroit residents watched fireworks, and others just watched fires, more than a dozen in a space of two hours. 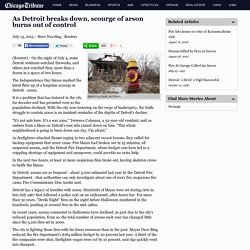 The Independence Day blazes marked the latest flare up of a longtime scourge in Detroit - arson. It is a problem that has festered in the city for decades and has persisted even as the population declined. With the city now teetering on the verge of bankruptcy, the futile struggle to contain arson is an insistent reminder of the depths of Detroit's decline. "It's not safe here. As firefighters attacked flames raging in two adjacent vacant houses, they called for backup equipment that never came. In the next two hours, at least 10 more suspicious fires broke out, leaving skeleton crews to battle the blazes.

Detroit has a legacy of troubles with arson. In recent years, arsons connected to Halloween have declined, in part due to the city's reduced population. There is no quick fix in sight. Detroit Unemployment Rate Increases In Dec. 2012, Joblessness Steady Across Michigan. (LANSING, Mich.) -- Unemployment went up in all of Michigan's major labor markets, including in the Detroit area, but officials say this is nothing unusual. 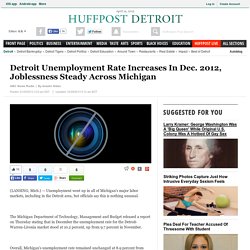 The Michigan Department of Technology, Management and Budget released a report on Thursday stating that in December the unemployment rate for the Detroit-Warren-Livonia market stood at 10.2 percent, up from 9.7 percent in November. Overall, Michigan's unemployment rate remained unchanged at 8.9 percent from November to December. "December labor market activity throughout the state was fairly normal as unemployment rates typically increase going into the winter months," Rick Waclawek, director of the Bureau of Labor Market, said in a statement. Copyright 2013 ABC News Radio CORRECTION: The headline for the story originally stated the unemployment rate rose in the Metro Detroit in December 2013 rather than December 2012. Also on HuffPost: Detroit to lay off 164 firefighters – USATODAY.com.