29 Signs You’re Doing Just Fine (Even If It Doesn’t Feel Like It) Happiness is not the absence of problems, but the ability to keep things in perspective and deal with them. 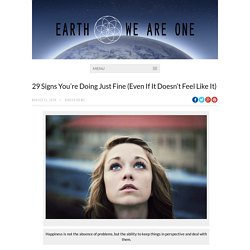 We all have days, weeks, months and – for some – even years of feeling anxious and uncertain. It’s a vague feeling you can’t quite put your finger on. From the outside, people think you have it all together, but they can’t see what’s going on in your head. Emptiness fills your thoughts and emotions all too often, nagging at you throughout the day. How to Overcome Laziness: 26 Steps. Edit Article Setting Your Mind StraightGetting Geared UpTaking ActionStaying Motivated Edited by Toni, Zack, Eric, Dave Crosby and 89 others Call it laziness, sloth, ineptitude, idleness, or whatever you like but the idea of doing nothing when things need doing is often considered to be a sign of weakness or shirking. 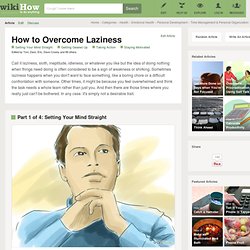 Sometimes laziness happens when you don't want to face something, like a boring chore or a difficult confrontation with someone. Other times, it might be because you feel overwhelmed and think the task needs a whole team rather than just you. Ad Steps Part 1 of 4: Setting Your Mind Straight 1Figure out the real issue. Part 2 of 4: Getting Geared Up 1Jump out of bed. Part 3 of 4: Taking Action 1Start. Part 4 of 4: Staying Motivated. The 7 Things I Did To Lose 220 Pounds Without Dieting. Back in 2001 I weighed more than 400 pounds. 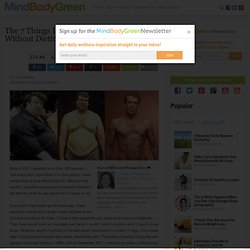 I tried every diet I could think of to lose weight. I even worked face to face with the late Dr. Atkins for two months, and after charging me thousands of dollars, the best he could do was yell at me for being so fat. Every diet I tried ended up the same way. There would be a whole list of foods I wasn’t allowed to eat. Milk the Pigeon. Live life Boldly. 23 Psychological Life Hacks You Need To Know. #13 Is Just Evil. 25 Science-Backed Ways to Feel Happier. If you’re happy and you know it, clap your hands! 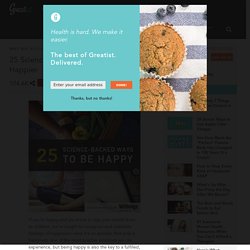 Even as children, we’re taught to recognize and celebrate feelings of happiness—and it’s no wonder. Not only is happiness one of the most positive emotions we can experience, but being happy is also the key to a fulfilled, healthy life. Plus, cheeriness is linked to living longer, how hard we work, physical function as we age, and an improved immune system, among other health benefits. While it’s hard to define (especially since it varies from person to person), some experts describe happiness as “a combination of life satisfaction and having more positive emotions than negative emotions,” while others view it as consisting of three parts: feeling good, living a “good life,” and feeling part of a larger purpose. There’s also a distinct difference between short- and long-term happiness: The former is a fleeting feeling, while the latter applies to how we describe our own lives. 1. 2. 3. S Guide to Meditation.

We've learned a lot about meditation by helping thousands of people meditate on Lift. 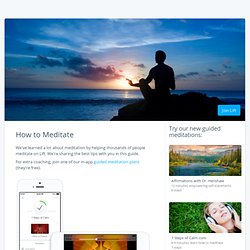 We're sharing the best tips with you in this guide. For extra coaching, join one of our in-app guided meditation plans (they're free). Meditation is a workout for your brain that strengthens your ability to focus. Better focus leads to better performance, higher creativity, reduced stress, and presence: the ability to be fully immersed in a situation. Meditation has many cognitive benefits. People in the Lift community who meditated for at least one month told us: 75% said meditation improved their focus at work 90% learned skills that they could apply to other areas 73% experienced spiritual or emotional changes There isn't a good answer to this question; it depends on you and your experiences as you meditate. 90% of meditators in the Lift community reported feeling benefits within the first two weeks.

Program Your Day to Defeat Distractions and Stick to Your Daily Routine. We live in an age where a thousand things vie for our attention, to the point that sometimes, basic daily tasks—whether they be chores or tasks as seemingly simple as eating or sleeping—can fall by the wayside. Here's how a detailed calendar can help fix your broken-down daily routine. We've talk a lot about how distractions can keep you from important work , but sometimes they can cut into your regular ol' daily life. For example, I wake up every morning and start writing, which is fine, but then I get engrossed by other work, or email, or anything else—and I'll skip right past breakfast, showering, and my morning workout. Before I know it, it's 1 PM and I'm an unshowered, pajama-clad internet junkie with a stomachache.

While that particular example doesn't apply to everyone (like those that work in an a real office), various combinations of "more pressing" matters can distract anyone from their daily routine. How to Use Your Calendar The key here is to set up the calendar and . Benjamin Franklin's Best Productivity Tricks.