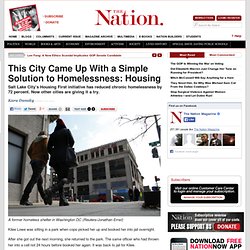 Now other cities are giving it a try. A former homeless shelter in Washington DC (Reuters/Jonathan Ernst) Kilee Lowe was sitting in a park when cops picked her up and booked her into jail overnight. After she got out the next morning, she returned to the park. The same officer who had thrown her into a cell not 24 hours before booked her again.

Kilee has been cycling in and out of the criminal justice system for years. “Just because I don’t have a credit card in my pocket,” she says, “does not make me a criminal.” Kilee lives in Salt Lake City, Utah. Not having a roof over your head means living in a continual crisis. Not only that, but they drain tax dollars that could be put to much better use. Salt Lake City crunched the numbers. And more importantly, chronic homelessness has dropped 72%. Please support our journalism. But it doesn’t have to be this way. Films For Action: Watch the Best Social Change Documentaries Ever Made. Major Social Transformation Is a Lot Closer Than You May Realize. 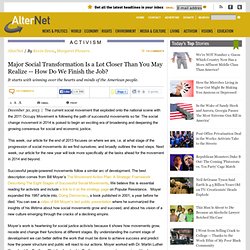 Join our email list: Stay up to date with the latest headlines via email. The current social movement that exploded onto the national scene with the 2011 Occupy Movement is following the path of successful movements so far. The social change movement in 2014 is poised to begin an exciting era of broadening and deepening the growing consensus for social and economic justice. This week, our article for the end of 2013 focuses on where we are, i.e. at what stage of the progression of social movements do we find ourselves; and broadly outlines the next steps. Public Banking Institute - Banking in the Public Interest. Home - The Public Bank Solution. SumOfUs. A social movement for economic democracy. Physicians for a National Health Program. The Democracy Collaborative.

Community-Wealth.org: Wealth-Building Strategies for America's Communities. Category Archives: Audio and Video. Part 2 of my conversation with Peter Buffett: “If you don’t have a way to speak to ordinary Americans, you’re not in the game.” 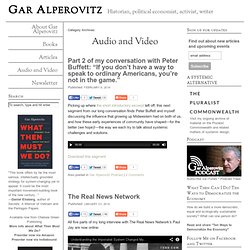 Picking up where the short introductory excerpt left off, this next segment from our long conversation finds Peter Buffett and myself discussing the influence that growing up Midwestern had on both of us, and how these early experiences of community have shaped—for the better (we hope)! —the way we each try to talk about systemic challenges and solutions. Download this segment The Real News Network All five parts of my long interview with The Real News Network’s Paul Jay are now online: Part One: “Understanding the Imperialist System Changed My Life” (video & transcript)

Building Political Power for a New Economy: Cross-Sectoral Approaches. This workshop will explore the work of organizers in Philadelphia and New York City in facilitating cross-sector organizing and building municipal-level umbrella organizations among alternative economic institutions. 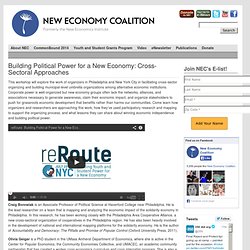 Corporate power is well-organized but new economy groups often lack the networks, alliances, and associations necessary to generate awareness, claim their economic impact, and organize stakeholders to push for grassroots economic development that benefits rather than harms our communities. Come learn how organizers and researchers are approaching this work, how they’ve used participatory research and mapping to support the organizing process, and what lessons they can share about winning economic independence and building political power. Craig Borowiak is an Associate Professor of Political Science at Haverford College near Philadelphia. He is the lead researcher on a team that is mapping and analyzing the economic impact of the solidarity economy in Philadelphia. New Economics Institute.

United Opt Out National. Portland ratchets up volunteer-led 'tool libraries' that lend tools for free. If you need a table saw, a 10-foot pipe clamp or a 20-foot pruner, you've normally got three choices: Buy it, rent it or borrow it from a neighbor. 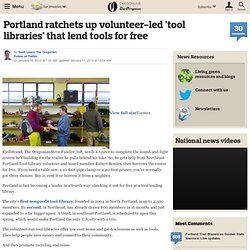 Portland is fast becoming a leader in a fourth way: checking it out for free at a tool lending library. The city's first nonprofit tool library, founded in 2004 in North Portland, is up to 2,300 members. Its second, in Northeast, has already drawn 800 members in 16 months and just expanded to a far bigger space. A third, in southeast Portland, is scheduled to open this spring, which would make Portland the only U.S. city with a trio. The volunteer-run tool libraries offer low-cost home and garden lessons as well as tools. And they promote recycling and reuse. About 900 of the more than 1,100 tools at the Northeast Portland Tool Library were donated, helping give the library a hardware store's worth of inventory. The first modern tool libraries started in the 1970s, with libraries in Berkeley, Calif., and Columbus, Ohio, among the pioneers. The Mondragon Experiment - Corporate Cooperativism (1980) FULL.