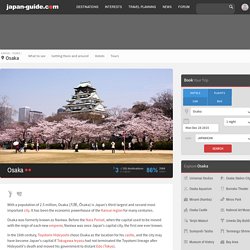 It has been the economic powerhouse of the Kansai region for many centuries. Osaka was formerly known as Naniwa. Before the Nara Period, when the capital used to be moved with the reign of each new emperor, Naniwa was once Japan's capital city, the first one ever known. OSAKA INFO -Osaka Visitors' Guide. Timetable and Route Search in Japan. Kansai International Airport access. Kansai International Airport (we spread in click) Concurrently with the opening of the Kansai International Airport in 1994, the Kansai-Airport Station started its operation as a doorway of Osaka open to the rest of world.The walkway directly connects the station to the passenger terminal of the airport, allowing travelers to enter the station ticket gate with their carts.Nankai tourist support center is located in front of the ticket gate and provides guidance services in foreign languages. 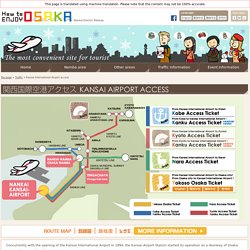 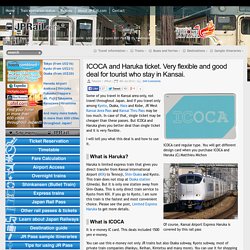 You will get different design card when you purchase ICOCA and Haruka (C) Matthieu Michon Some of you travel in Kansai area only, not travel throughout Japan. And if you travel only among Kyoto, Osaka, Nara and Kobe, JR West Kansai Area Pass and Kansai Thru Pass may be too much. ICOCA_en.pdf. Taking the train in Japan. The following is a guide on how to use trains and subways in Japan. 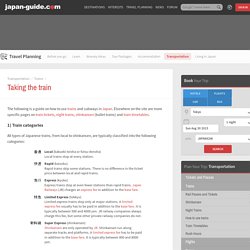 Elsewhere on the site are more specific pages on train tickets, night trains, shinkansen (bullet trains) and train timetables. 1) Train categories All types of Japanese trains, from local to shinkansen, are typically classified into the following categories: 2) Seat categories JR offers the choice between two classes, ordinary and green (first class), on shinkansen, limited express trains and a small number of slower trains. A Complete Guide to Osaka and Umeda Stations For Foreign Travelers. This post is also available in: Chinese (Traditional), Japanese Table of Contents 1. 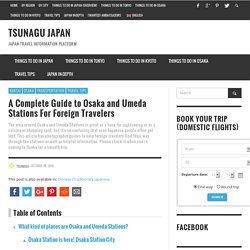 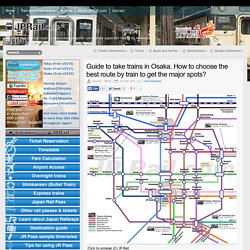 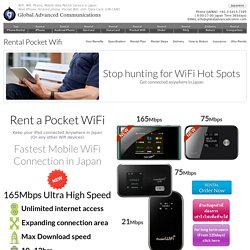 In Japan, there are almost no free Wifi environments. Although free Wifi can be used easily in McDonald's or Starbucks in the United States and other countries, that service is not available in Japan unless the device is registered in advance. This necessary registration is very difficult for a foreigner. Moreover, we cannot rely on the security of these environments. 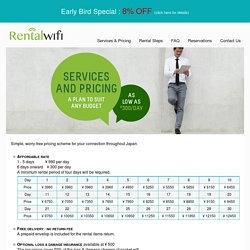 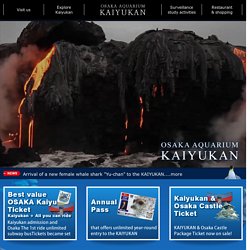 Ebisubashi OsakaTownMap_omote.pdf. How to get to Sky Building in Osaka Umeda. If you're new here, you may want to subscribe to my RSS feed. 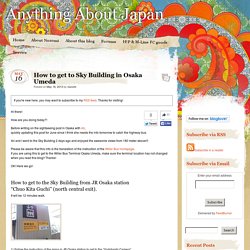 Thanks for visiting! Hi there! How are you doing today?! Before writing on the sightseeing post in Osaka with Ari, quickly updating this post for June since I think she needs the info tomorrow to catch the highway bus. Ari and I went to the Sky Building 2 days ago and enjoyed the awesome views from 180 meter above!!! Universal Studios Japan® Ten things we learned at USJ: A muggle’s guide to the Wizarding World of Harry Potter. Welcome aboard the Hogwarts Express! Located in Osaka prefecture, this new attraction opened its doors in July of 2014. Thousands of Harry Potter fans have flocked to USJ since its opening, and RocketNews24 is here to provide you with some tips and tricks to make your visit as smooth as possible. Hold onto your wands, and join us as we enter the magical Wizarding World of Harry Potter. 1. Osaka Museum of History. “Tenjinbashisuji Shotengai (Shopping Street)”

Tenjinbashi neighborhood was one of the earliest shopping streets in Osaka. Shops were already lining the streets of Osaka Temmangu area in the early Meiji era (1868-1912), and it is said to have grown to be close to the current size by the advent of the Showa era (1926-1989). Walk the history-rich shopping street from one end to the other, and pick up some gems among the shops! Tenjinbashisuji Shotengai. After a few months’ break while relocating from the US to China, like a fish in water has resumed documenting and sharing unique neighborhoods and places through exploratory photo walks. While I will continue to use many examples of transit-oriented and walkable development from Japan, I will also be exploring my new stomping grounds of Beijing and, in time, other cities in Mainland China and Hong Kong. Like a fish in water. My last stop on this walk around Osaka was Kuromon Ichiba (黒門市場), the city’s venerable food market in Nipponbashi, Naniwa Ward.

Kuromon is situated in a covered shōtengai with its north and west entrances opening right above Nipponbashi Station on the municipal subway Sakaisuji Line and Sennichimae Line, as well as Kintetsu-Nipponbashi Station on the Kintetsu Namba Line. View Larger Map The market was formally established in 1902 as Enmei-ji Ichiba (圓明寺市場), which referred to a large Buddhist temple in the area at that time but destroyed by fire in 1912. “Kuromon” was a common name given by denizens of the market, which referred to the temple’s large black main gate, and it is this name that is used exclusively today. The official website for the Shinsaibashisuji Shopping Center. The official website for the Shinsaibashisuji Shopping Center Search by Name Search by Category Following Shops are not on the map above.GINZAYA ｜ healing salon YURAKU ｜ Nakaniwa Souhonten ｜ Shinsaibashi Turuya ｜ Katsuraya | Kodaimaru Building.

Where to eat in Osaka Namba

RINKU PREMIUM OUTLETS® The Phenomenal Mama: {Japan 2014} Day 1: Arrival at Osaka International Airport. Click here to read ALL my Japan posts. The Phenomenal Mama: {Japan 2014} Osaka, Kyoto, Nara & Kobe Trip Itinerary. NANKAI Universal-city Ticket (Round trip) The 100 Most Important Japanese Words You Should Know - Tofugu. Tennoji area map. Tennoji Zoo. Tennoji zoo map. Kyoto Travel Guide. Kyoto (京都, Kyōto) served as Japan's capital and the emperor's residence from 794 until 1868. It is now the country's seventh largest city with a population of 1.4 million people and a modern face. Kobe Travel Guide. Kobe (神戸, Kōbe) is the capital of Hyogo Prefecture and one of Japan's ten largest cities. Located between the sea and the Rokko mountain range, Kobe is also considered one of Japan's most attractive cities. Kobe has been an important port city for many centuries. Kyoto Walking Itineraries - Inside Kyoto.