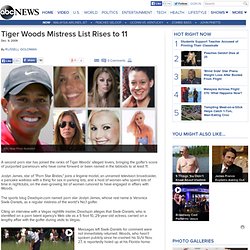 Waitress Jaimee Grubbs claims torrid affair with Tiger Woods amid Rachel Uchitel tryst rumors. Jaimee Grubbs, 24, who says she was 21 when she first hooked up with Woods in April 2007, is expected to dish the details in an upcoming US Weekly report, TMZ.com reported Tuesday. 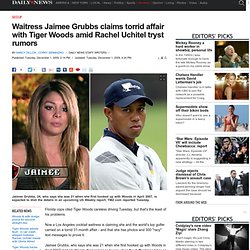 Florida cops cited Tiger Woods careless driving Tuesday, but that's the least of his problems. Now a Los Angeles cocktail waitress is claiming she and the world's top golfer carried on a torrid 31-month affair - and that she has photos and 300 "racy" text messages to prove it. Jaimee Grubbs, who says she was 21 when she first hooked up with Woods in April 2007, told Us Weekly their romance began when the duffer tapped her on the shoulder and said, "You don't look like you're having any fun.

" Grubbs, 24, said they had 20 sexual encounters after that. Until now, Grubbs was best known as the girlfriend of Shawn "Loud Mouth Tool" Southern, one of the oafish contestants on VH1's reality series, "Tool Academy. " "Despite the celebrity status of Mr. They did not witness any domestic violence ... Holly Sampson: Tiger Woods Mistress. Tiger Woods Text Messages to Joslyn James: 122 texts on website. Not one for gossip but we have said that text messages can get you into trouble, well the latest news and hot news at that comes via New York Post about Tiger Woods text messages to Joslyn James. 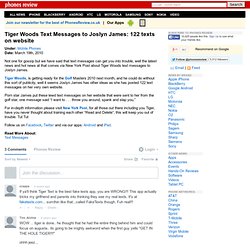 Tiger Woods, is getting ready for the Golf Masters 2010 next month, and he could do without this sort of publicity, well it seems Joslyn James has other ideas as she has posted 122 text messages on her very own website. Porn star James put these lewd text messages on her website that were sent to her from the golf star, one message said “I want to . . . throw you around, spank and slap you,” For in-depth information please visit New York Post, for all those out there including you Tiger, have you never thought about training each other “Read and Delete”, this will keep you out of trouble. 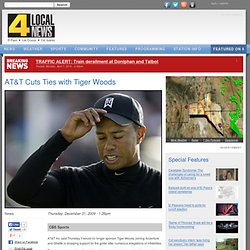 The phone company hasn't used Woods' image extensively in advertising, but its logo appeared on his golf bag. That deal had been billed as a "multi-year" agreement when it was signed early in 2009. Woods has also been the host of the AT&T National PGA Tour event since it started in 2007. The phone company said it would continue to sponsor the event, which will be held in Newtown Square, Pennsylvania, in July. AT&T did not comment on its reasons for dropping Woods, or how much his contracts were worth. Consulting firm Accenture dropped the athlete two weeks ago, saying he was "no longer the right representative" of the company's values. Electronic Arts Inc., which puts out the "Tiger Woods PGA Tour" series of golf video games, has not said what its plans are for the franchise. Video: Gillette Cuts Tiger From Its Ads part of Tiger Woods.