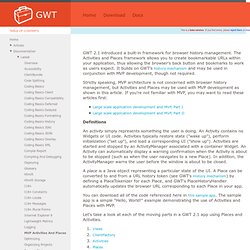 The Activities and Places framework allows you to create bookmarkable URLs within your application, thus allowing the browser's back button and bookmarks to work as users expect. It builds on GWT's history mechanism and may be used in conjunction with MVP development, though not required. Strictly speaking, MVP architecture is not concerned with browser history management, but Activities and Places may be used with MVP development as shown in this article. If you're not familiar with MVP, you may want to read these articles first: Definitions An activity simply represents something the user is doing. A place is a Java object representing a particular state of the UI.

You can download all of the code referenced here in this sample app. Guice - Guice (pronounced 'juice') is a lightweight dependency injection framework for Java 5 and above, brought to you by Google. Google Guice. Google Guice (pronounced "juice")[1] is an open source software framework for the Java platform released by Google under the Apache License. 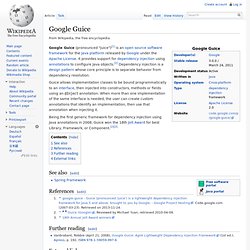 Being the first generic framework for dependency injection using Java annotations in 2008, Guice won the 18th Jolt Award for best Library, Framework, or Component.[2][3] See also[edit] ARIA For GWT: My health Is feeling accessible. By T.V. 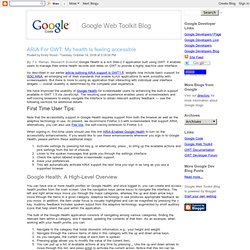 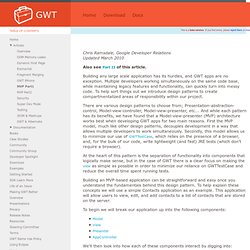 Building any large scale application has its hurdles, and GWT apps are no exception. Multiple developers working simultaneously on the same code base, while maintaining legacy features and functionality, can quickly turn into messy code. To help sort things out we introduce design patterns to create compartmentalized areas of responsibility within our project. There are various design patterns to choose from; Presentation-abstraction-control, Model-view-controller, Model-view-presenter, etc... At the heart of this pattern is the separation of functionality into components that logically make sense, but in the case of GWT there is a clear focus on making the view as simple as possible in order to minimize our reliance on GWTTestCase and reduce the overall time spent running tests. 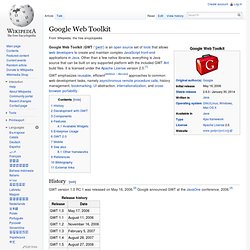 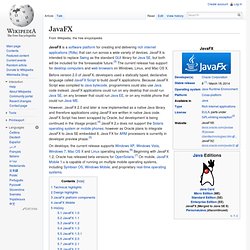 Because JavaFX Script was compiled to Java bytecode, programmers could also use Java code instead. JavaFX applications could run on any desktop that could run Java SE, on any browser that could run Java EE, or on any mobile phone that could run Java ME. On desktops, the current release supports Windows XP, Windows Vista, Windows 7, Mac OS X and Linux operating systems.[6] Beginning with JavaFX 1.2, Oracle has released beta versions for OpenSolaris.[7] On mobile, JavaFX Mobile 1.x is capable of running on multiple mobile operating systems, including Symbian OS, Windows Mobile, and proprietary real-time operating systems. Technical highlights[edit] Coding Basics - JavaScript Native Interface (JSNI) - Google Web Toolkit. Often, you will need to integrate GWT with existing handwritten JavaScript or with a third-party JavaScript library. 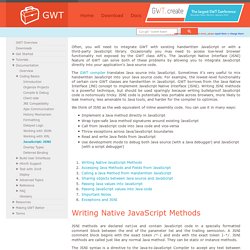 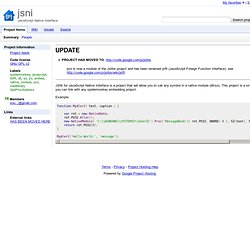 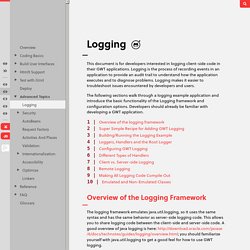 Logging is the process of recording events in an application to provide an audit trail to understand how the application executes and to diagnose problems. Logging makes it easier to troubleshoot issues encountered by developers and users. The following sections walk through a logging example application and introduce the basic functionality of the Logging framework and configuration options. Developers should already be familiar with developing a GWT application. Overview of the Logging Framework The logging framework emulates java.util.logging, so it uses the same syntax and has the same behavior as server-side logging code. GWTTestCase. Reports an exception that might have escaped to the browser. 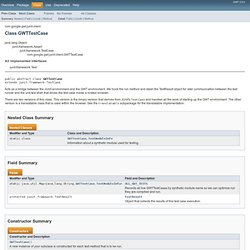 In that case, test will fail after the main body returns with the reported exception. Closure Tools. What is the Closure Compiler? The Closure Compiler is a tool for making JavaScript download and run faster. Instead of compiling from a source language to machine code, it compiles from JavaScript to better JavaScript. It parses your JavaScript, analyzes it, removes dead code and rewrites and minimizes what's left.