Philosophy of Motivation. How To Be Motivated: 4 New Insights From Research. Sometimes there is not enough coffee in universe to get you going. 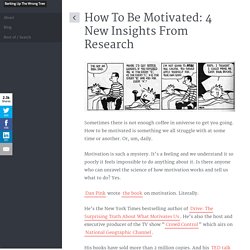 How to be motivated is something we all struggle with at some time or another. Or, um, daily. Motivation is such a mystery. It’s a feeling and we understand it so poorly it feels impossible to do anything about it. Is there anyone who can unravel the science of how motivation works and tell us what to do? Dan Pink wrote the book on motivation. He’s the New York Times bestselling author of Drive: The Surprising Truth About What Motivates Us. His books have sold more than 2 million copies. Here’s what I love about Dan: He’s not the type to write a book and just move on. Here’s what you’ll get from this post: Why you don’t feel motivated.What the research says really produces motivation.The single most motivating thing there is and how to have it in your life.The biggest mistake you’re making when it comes to motivation. Let’s get to it… 1) This Is Why You Don’t Feel Motivated Rewards like money are tricky.

Brain Games are Bogus. A decade ago, a young Swedish researcher named Torkel Klingberg made a spectacular discovery. 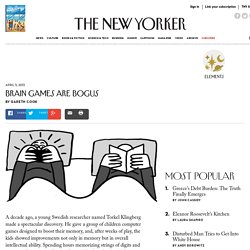 He gave a group of children computer games designed to boost their memory, and, after weeks of play, the kids showed improvements not only in memory but in overall intellectual ability. Spending hours memorizing strings of digits and patterns of circles on a four-by-four grid had made the children smarter. The finding countered decades of psychological research that suggested training in one area (e.g., recalling numbers) could not bring benefits in other, unrelated areas (e.g., reasoning). The Klingberg experiment also hinted that intelligence, which psychologists considered essentially fixed, might be more mutable: that it was less like eye color and more like a muscle.

It seemed like a breakthrough, offering new approaches to education and help for people with A.D.H.D., traumatic brain injuries, and other ailments. The responsibility is so heavy because the needs are so great. Why You Never Truly Leave High School. Throughout high school, my friend Kenji had never once spoken to the Glassmans. 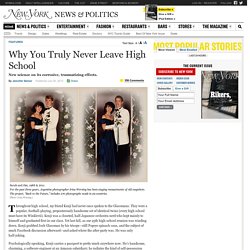 They were a popular, football-­playing, preposterously handsome set of identical twins (every high school must have its Winklevii). Kenji was a closeted, half-Japanese orchestra nerd who kept mainly to himself and graduated first in our class. Yet last fall, as our 25th high-school reunion was winding down, Kenji grabbed Josh Glassman by his triceps—still Popeye spinach cans, and the subject of much Facebook discussion afterward—and asked where the after-party was.

He was only half-joking. Psychologically speaking, Kenji carries a passport to pretty much anywhere now. The party was fine. Bloom's Taxonomy of Learning Domains: The Cognitive Domain. Bloom's Taxonomy was created in 1956 under the leadership of educational psychologist Dr Benjamin Bloom in order to promote higher forms of thinking in education, such as analyzing and evaluating concepts, processes, procedures, and principles, rather than just remembering facts (rote learning). 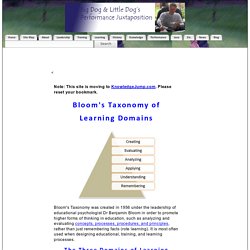 It is most often used when designing educational, training, and learning processes. The Three Domains of Learning The committee identified three domains of educational activities or learning (Bloom, et al. 1956): Cognitive: mental skills (knowledge) Affective: growth in feelings or emotional areas (attitude or self) Psychomotor: manual or physical skills (skills) Since the work was produced by higher education, the words tend to be a little bigger than we normally use. While the committee produced an elaborate compilation for the cognitive and affective domains, they omitted the psychomotor domain. Cognitive Domain Knowledge Comprehension Application Analysis Synthesis Evaluation Next Steps Review. 50 Best Graphic Design Firms in the World. Be Creative. Steps Method 1 Adjusting Your Mindset <img alt="Image titled Be Creative Step 1" src=" width="728" height="546" class="whcdn">1Take feedback with a grain of salt. 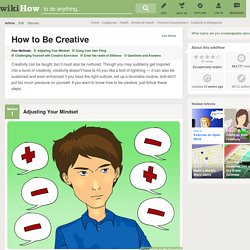 Keep following your own path. The problem with asking for feedback is that a person's feedback will always be biased because he or she will have a different idea of what your work should be. <img alt="Image titled Be Creative Step 6" src=" width="728" height="546" class="whcdn">6Think like an adult but act like a kid. Method 2 Doing Your Own Thing. What Causes Fear? A potential for pain, or an unrecognizable event, causes fear. 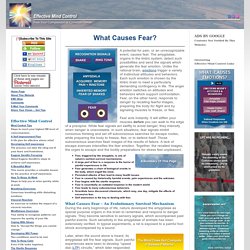 The amygdalae, organs in the limbic system, detect such possibilities and send the signals which generate the fear emotion. Unlike the rational brain, emotions trigger a variety of instinctual attitudes and behaviors. Each such emotion is chosen by the limbic brain to meet a particularly demanding contingency in life. The anger emotion switches on attitudes and behaviors which support confrontation. Fear, on the other hand, responds to danger by recalling fearful images, preparing the body for flight and by signaling muscles to freeze, or flee.