Moving Physical Objects. Teleport In 4.9 we’ve exposed the teleport flag to several blueprint nodes, and this seemed like a good opportunity to give some detail on how it all works. 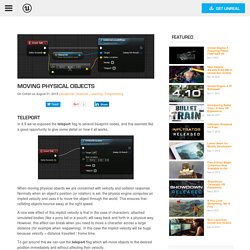 When moving physical objects we are concerned with velocity and collision response. Normally when an object’s position (or rotation) is set, the physics engine computes an implicit velocity and uses it to move the object through the world. This ensures that colliding objects bounce away at the right speed. A nice side effect of this implicit velocity is that in the case of characters, attached simulated bodies (like a pony tail or a pouch) will sway back and forth in a physical way. To get around this we can use the teleport flag which will move objects to the desired position immediately and without affecting their velocity. Example In this example we have a simple ball character with a simulated antenna that sways back and forth with forward movement. Sweep The sweep flag is used for restricting movement. Simulated objects Scene Queries. Setting Up Visual Studio for UE4. 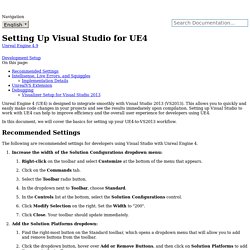 This allows you to quickly and easily make code changes in your projects and see the results immediately upon compilation. Setting up Visual Studio to work with UE4 can help to improve efficiency and the overall user experience for developers using UE4. In this document, we will cover the basics for setting up your UE4-to-VS2013 workflow.

Recommended Settings. Referencing Assets. Unreal Engine 4 provides a number of mechanisms to control how an asset is referenced and by extension loaded into memory. 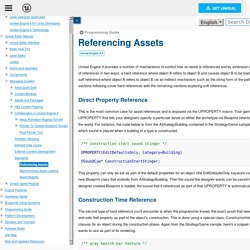 Your gameplay class exposes a UPROPERTY that lets your designers specify a particular asset on either the archetype via Blueprint inheritance or via an instance placed in the world. Referencing Assets. Replication, Actor/Pawn Rotation in C++ After digging though some of the links i've found I decided to try my hand at getting character rotation to properly replicate. 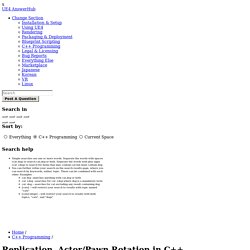 Unfortunately I cannot get client's to replicate their rotation to the server. If using a listen server the server pawn works and the clients can see the server pawn rotation. On clients only the owning client can see it's rotation. As a side note I'm using the shootergame and plugged in the top down camera from the top down game (isometric). I know this is a combination of both client to server and server to client... but I failed at both independently so I thought I'd try both /shrug.... poking it with a stick at this point. Sorry for my presumably bad code only wrote my first line of code a few weeks ago. ShooterCharacter.h ShooterCharacter.cpp ShooterPlayerController.h. 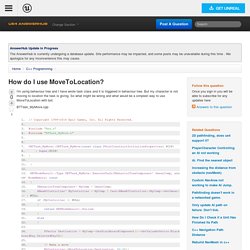 But my character is not moving to location the task is giving. So what might be wrong and what would be a simplest way to use MoveToLocation with bot. BTTask_MyMove.cpp. Spissa Blog. In my humble opinion, Unreal Engine 4 is one of the most powerful game engines that exist right now, and the Epic Games team has released a license for all user, for just 19 USD a month. 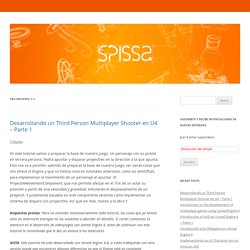 This first tutorial gives an introduction to UE4. We will create the basis for our game by having a character walk through a level. We will use a fixed camera and basic game controls. Unreal Engine 4 C++ Tutorial Version 4.0.2: Basic Artificial Intelligence. Survival Sample Game in C++ for Unreal Engine 4. C++ Third-person survival game sample covering common gameplay and networking concepts for games in Unreal Engine 4. 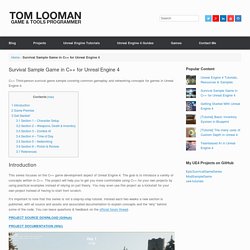 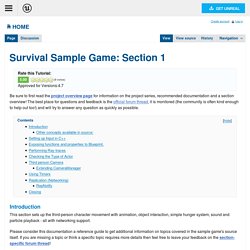 The best place for questions and feedback is the official forum thread, it is monitored (the community is often kind enough to help out too!) And will try to answer any question as quickly as possible. Introduction This section sets up the third-person character movement with animation, object interaction, simple hunger system, sound and particle playback - all with networking support. Please consider this documentation a reference guide to get additional information on topics covered in the sample game's source itself. View & download latest project source on GitHub a branch for this section is available too.

How to spawn a blueprint from C++? I have attempted to program some code that spawns a bullet above my pawn. 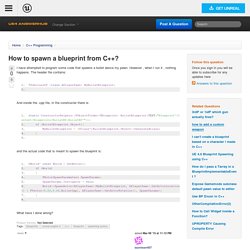 However , when I run it , nothing happens. The header file contains: TSubclassOf <class APlayerPawn> MyBulletBlueprint; And inside the .cpp file, in the constructer there is: Lmalave/unreal-augmented-reality-toolkit. Entry Level Guide to UE4 C++ Approved for Versions:(please verify) Overview Author Rama (talk) Dear Community, This wiki page is devoted to reducing the intensity of the C++ entry point for new coders. 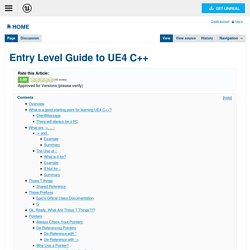 If you have general questions as you are trying to get comfortable with C++, please ask them in the Discussion Tab. I and hopefully others can then answer those questions in this main page. Blueprints, Empower Your Entire Team With BlueprintImplementableEvent. Overview Original Author: Rama (talk) Dear Community, Solus C++ Tutorials. Approved for Versions:(please verify) Overview Author: Rama (talk) This page is a repository for all of the C++ tutorials that I will be making that are directly related to the Solus Project! The reason these are "Solus" tutorials is because I am sharing the development process of the Unreal Engine 4 game called Solus from the C++ perspective. Showcase on Solus Solus, by Teotle Studios. Solus C++ Tutorials. Call Blueprint functions from C++

AR implemented with OpenCV webcam capture drawn to dynamic texture. Originally Posted by me1mlewHi lmalave,I'm having a bit of troube getting Unreal Engine to work with OpenCV. In your readme.md on github it states I should "To use the OpenCVVideo source, will need to install the OpenCV SDK and add the "core" and "highgui" libraries to the libpath". Would you mind telling me how exactly you did this? As there are a few posts concerning this around the forum which all seem to employ different methods.Any info would be greatly appreciated.Hi there me1mlew,I try to give you some tips in order to get that working. "install the OpenCV SDK" You can download this library from here: My experience is that latest OpenCV version doesn't work preperly in collaboration with Unreal.

I've found that a stable version is 2.4.1.0. Lmalave/unreal-augmented-reality-toolkit. C++ Programming Tutorials. Adding StaticMesh. Hi, I am new to game development and Unreal Engine 4. I am using version 4.7 I have created a StaticMeshComponent and kept that as a RootComponent. Also I have added StaticMeshObject inside the code instead of adding it in the Details Panel.

How do I get an Actor's static mesh? How do I detect what actor my projectile is colliding with and deal damage? Reflecting Projectile C++ Approved for Versions:(please verify) Background At the suggestion of Adam Davis, I have reproduced my website's reflecting projectile tutorial here. This tutorial will cover setting up the project and detailing in depth what changes I made to produce the end result. Projectile C++ Wryv/Source/Wryv at master · superwills/Wryv. First Person Shooter C++ Tutorial. Reflecting Projectile C++ Particle System Component cannot be deactivated. Wryv/Explosion.cpp at master · superwills/Wryv. ConstructorHelper in function cause a crash - UE4 AnswerHub. When editor crashed after called function the debuger make exception and show me this string UE_CLOG(!

GIsInConstructor, LogUObjectGlobals, Fatal, TEXT("FObjectFinders can't be used outside of constructors to find %s"), ObjectToFind); I tried add _C to the end of path but it's doesn't help. Dynamic Load Object. Lmalave/unreal-augmented-reality-toolkit. OpenCV Tutorial: Real-Time Object Tracking Without Colour. AR implemented with OpenCV webcam capture drawn to dynamic texture. Unity3D Developer's Guide to Unreal Engine 4. C++ Character Class & LineTrace - UE4 AnswerHub. If you are talking about the main character you move around, Put this in your GameMode.cpp static ConstructorHelpers::FClassFinder<APawn> PlayerPawnBPClass(TEXT("Blueprint'/Game/Blueprints/ShipBp'"));// if (PlayerPawnBPClass.Class ! = NULL) { DefaultPawnClass = PlayerPawnBPClass.Class; } of course the TEXT would change to whatever your blueprint is and would be changed to the type of blueprint.

Entry Level Guide to UE4 C++ Battery Collector - 2 - Building The Base Level. Battery Collector - 2 - Building The Base Level. 1. Customize a Pawn. Unreal Engine. Unreal Engine. How would i use line trace in c++ - UE4 AnswerHub. Programming Guide. Introduction to C++ Programming in UE4. Animation Blueprint, Set Custom Variables Via C++ How can I Access my C++ array inside a blueprint? - UE4 AnswerHub.