The Data That Turned the World Upside Down - Motherboard. An earlier version of this story appeared in Das Magazin in December. 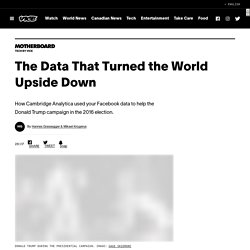 On November 9 at around 8.30 AM., Michal Kosinski woke up in the Hotel Sunnehus in Zurich. The 34-year-old researcher had come to give a lecture at the Swiss Federal Institute of Technology (ETH) about the dangers of Big Data and the digital revolution. Algorithmes : les administrés vont pouvoir connaître les règles des décisions les concernant. Big Data: EP calls for better protection of fundamental rights and privacy. Strengthened transparency of algorithms, special attention to data used for law enforcement and more investment in digital literacy needed to safeguard fundamental rights in the digital era, MEPs say in a non-legislative resolution passed on Tuesday. 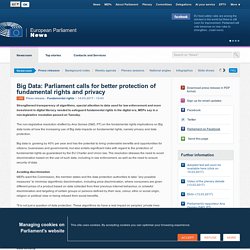 The non-legislative resolution drafted by Ana Gomes (S&D, PT) on the fundamental rights implications on Big data looks at how the increasing use of Big data impacts on fundamental rights, namely privacy and data protection. Big data is growing by 40% per year and has the potential to bring undeniable benefits and opportunities for citizens, businesses and governments, but also entails significant risks with regard to the protection of fundamental rights as guaranteed by the EU Charter and Union law. The resolution stresses the need to avoid discrimination based on the use of such data, including in law enforcement, as well as the need to ensure security of data. Avoiding discrimination. Smart TVs, Microwaves: Stop Hackers From Spying On You. From televisions to toasters, all kinds of devices are getting hooked up to the Internet. 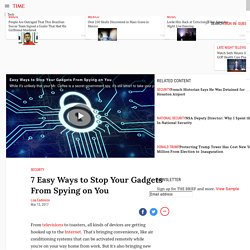 That's bringing convenience, like air conditioning systems that can be activated remotely while you're on your way home from work. But it's also bringing new privacy concerns, as anything connected to the Internet tends to attract the attention of hackers. Case in point: Documents recently released by Wikileaks suggest the Central Intelligence Agency can use spying targets' TVs against them, turning the sets into always-listening microphones. Kellyanne Conway, counselor to President Donald Trump, also recently claimed that microwaves could also be used as spying devices, though she has since walked back those comments. Other "smart" devices, meanwhile, have been caught secretly tracking their users' behavior and reporting that information back to the company that made them.

Uk.businessinsider. Announcing A New Open-Source Privacy Standard For The Internet Of Things – Co... At Consumerist, consumer privacy and data security have been growing areas of coverage over the past few years. 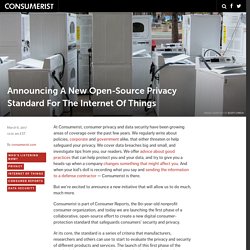 We regularly write about policies, corporate and government alike, that either threaten or help safeguard your privacy. We cover data breaches big and small, and investigate tips from you, our readers. We offer advice about good practices that can help protect you and your data, and try to give you a heads-up when a company changes something that might affect you. And when your kid’s doll is recording what you say and sending the information to a defense contractor — Consumerist is there. An Error Occurred Setting Your User Cookie. Computer-based personality judgments are more accurate than those made by humans. Author Affiliations Edited by David Funder, University of California, Riverside, CA, and accepted by the Editorial Board December 2, 2014 (received for review September 28, 2014) Significance This study compares the accuracy of personality judgment—a ubiquitous and important social-cognitive activity—between computer models and humans. 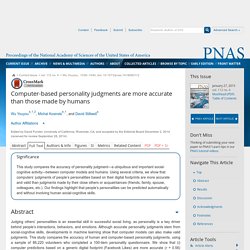 Using several criteria, we show that computers’ judgments of people’s personalities based on their digital footprints are more accurate and valid than judgments made by their close others or acquaintances (friends, family, spouse, colleagues, etc.). On What Facebook Knows – An Interview with the Man Behind Facebook’s Personality Experiment. Earlier this year, researchers from The University of Cambridge and Stanford University released a report which looked at how people’s Facebook activity could be used as an indicative measure of their psychological profile. 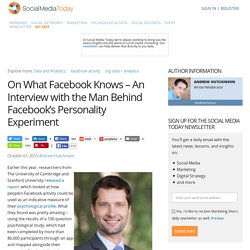 What they found was pretty amazing – using the results of a 100 question psychological study, which had been completed by more than 86,000 participants through an app and mapped alongside their respective Facebook likes, the researchers developed a system which could then, based on Facebook activity alone, determine a person’s psychological make-up more accurately than their friends, their family – better even than their partners. The research was widely reported with headlines like “Facebook Knows You Better Than Your Therapist”, stoking the coals of ongoing debates about internet privacy and the all-knowing power held by Facebook.

Everything is Predictable. Big data and psychographic profiling helped Donald Trump win the US presidential election. Contrary to expectations from polls, Donald Trump secured a surprise victory in the 2016 US Presidential Election. 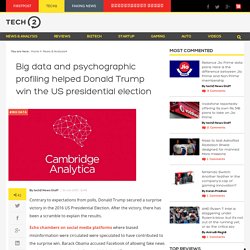 After the victory, there has been a scramble to explain the results. Echo chambers on social media platforms where biased misinformation were circulated were speculated to have contributed to the surprise win. Barack Obama accused Facebook of allowing fake news stories to spread on the platform, which helped Trump win.

Facebook denied the allegations, but took strong steps to restrict the spread of misinformation on the social network. The Data That Turned the World Upside Down - Motherboard. Did Cambridge Analytica influence the Brexit vote and the US election? On Saturday 23 June 2012, David Miller received an angry email. 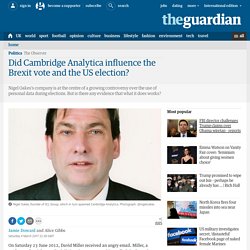 Miller, a professor of sociology at Bath University, runs something called the Powerbase website, which records the political and business connections of influential people. The writer of the email, who seemed to be based in Russia, explained that “all the content” about Nigel Oakes, a PR fixer and political consultant, published on the website, was “fake” and demanded that it be taken down. Watchdog to launch inquiry into misuse of data in politics.

The UK’s privacy watchdog is launching an inquiry into how voters’ personal data is being captured and exploited in political campaigns, cited as a key factor in both the Brexit and Trump victories last year. 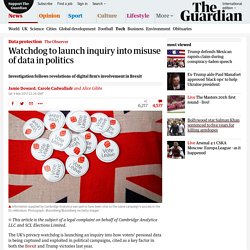 The intervention by the Information Commissioner’s Office (ICO) follows revelations in last week’s Observer that a technology company part-owned by a US billionaire played a key role in the campaign to persuade Britons to vote to leave the European Union. It comes as privacy campaigners, lawyers, politicians and technology experts express fears that electoral laws are not keeping up with the pace of technological change. “We are conducting a wide assessment of the data-protection risks arising from the use of data analytics, including for political purposes, and will be contacting a range of organisations,” an ICO spokeswoman confirmed.

Brent Mittelstadt, Patrick Allo, Mariarosaria Taddeo, Sandra Wachter, and Luciano Floridi. Profiling the European Citizen - Cross-Disciplinary. In the eyes of many, one of the most challenging problems of the information society is that we are faced with an ever expanding mass of information. 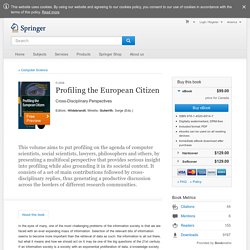 Selection of the relevant bits of information seems to become more important than the retrieval of data as such: the information is all out there, but what it means and how we should act on it may be one of the big questions of the 21st century. If an information society is a society with an exponential proliferation of data, a knowledge society must be the one that has learned how to cope with this. Big data and privacy.