Robots/AI killing jobs. Transhumanisme. Conclusions_Groupes_Travail_France_IA. Industry Connections. The purpose of this Initiative is to ensure every technologist is educated, trained, and empowered to prioritize ethical considerations in the design and development of autonomous and intelligent systems. 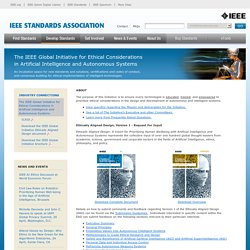 Ethically Aligned Design, Version 1 - Request For Input Ethically Aligned Design: A Vision for Prioritizing Human Wellbeing with Artificial Intelligence and Autonomous Systems represents the collective input of over one hundred global thought leaders from academia, science, government and corporate sectors in the fields of Artificial Intelligence, ethics, philosophy, and policy. Details on how to submit comments and feedback regarding Version 1 of the Ethically Aligned Design (EAD) can be found via the Submission Guidelines. Individuals interested in specific content within the EAD can submit feedback on the following sections relevant to their particular interests: Join the Conversation. Feisty jenn - Machine Learning with Personal Data by Dimitra... LinkedIn. How to settle any “is this real AI?” debate — Measuring Artificial Intelligence.

Our Machines Now Have Knowledge We’ll Never Understand. Automatic for the people: How Germany’s Otto uses artificial intelligence. A GLIMPSE into the future of retailing is available in a smallish office in Hamburg. 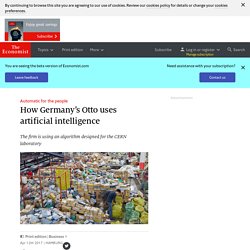 From there, Otto, a German e-commerce merchant, is using artificial intelligence (AI) to improve its activities. The firm is already deploying the technology to make decisions at a scale, speed and accuracy that surpass the capabilities of its human employees. Big data and “machine learning” have been used in retailing for years, notably by Amazon, an e-commerce giant. The idea is to collect and analyse quantities of information to understand consumer tastes, recommend products to people and personalise websites for customers. Otto’s work stands out because it is already automating business decisions that go beyond customer management. Its conventional data analysis showed that customers were less likely to return merchandise if it arrived within two days.

But customers also dislike multiple shipments; they prefer to receive everything at once. Courts Are Using AI to Sentence Criminals. That Must Stop Now. There is a stretch of highway through the Ozark Mountains where being data-driven is a hazard. 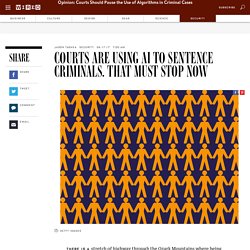 About Jason Tashea (@justicecodes), a writer and technologist based in Baltimore, is the founder of Justice Codes, a criminal justice and technology consultancy. Heading from Springfield, Missouri, to Clarksville, Arkansas, navigation apps recommend the Arkansas 43. While this can be the fastest route, the GPS’s algorithm does not concern itself with factors important to truckers carrying a heavy load, such as the 43’s 1,300-foot elevation drop over four miles with two sharp turns. The road once hosted few 18-wheelers, but the last two and half years have seen a noticeable increase in truck traffic—and wrecks.

Truckers familiar with the region know that Highway 7 is a safer route. AI Open Letter - Future of Life Institute. Artificial intelligence (AI) research has explored a variety of problems and approaches since its inception, but for the last 20 years or so has been focused on the problems surrounding the construction of intelligent agents – systems that perceive and act in some environment. 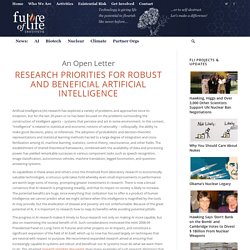 In this context, “intelligence” is related to statistical and economic notions of rationality – colloquially, the ability to make good decisions, plans, or inferences. The adoption of probabilistic and decision-theoretic representations and statistical learning methods has led to a large degree of integration and cross-fertilization among AI, machine learning, statistics, control theory, neuroscience, and other fields.

As capabilities in these areas and others cross the threshold from laboratory research to economically valuable technologies, a virtuous cycle takes hold whereby even small improvements in performance are worth large sums of money, prompting greater investments in research. Open Letter on Autonomous Weapons - Future of Life Institute. AI/Robotics Researchers : Stuart Russell Berkeley, Professor of Computer Science, director of the Center for Intelligent Systems, and co-author of the standard textbook “Artificial Intelligence: a Modern Approach"Nils J. 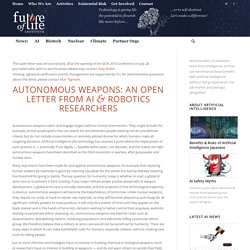 Nilsson, Department of Computer Science, Stanford University, Kumagai Professor of Engineering, Emeritus, past president of AAAIBarbara J. Grosz Harvard University, Higgins Professor of Natural Sciences, former president AAAI, former chair of IJCAI Board of TrusteesTom Mitchell CMU, past president of AAAI, Fredkin University Professor and Head of the Machine Learning DepartmentEric Horvitz, Microsoft Research, Managing director, Microsoft Research, past president of AAAI, co-chair of AAAI Presidential Panel on Long-term AI Futures, member of ACM, IEEE CISMartha E. Le fil. What if your ‘doctor’ were a robot? How AI is challenging our ethics. Imagine you are about to receive a diagnosis for what is suspected to be some form of leukemia. 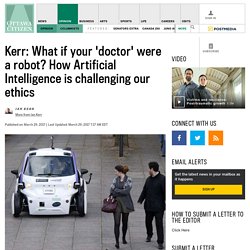 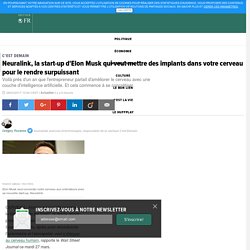 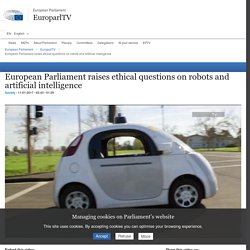 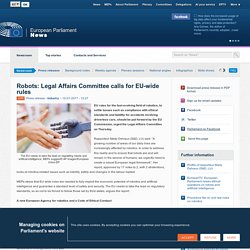 Rapporteur Mady Delvaux (S&D, LU) said: “A growing number of areas of our daily lives are increasingly affected by robotics. In order to address this reality and to ensure that robots are and will remain in the service of humans, we urgently need to create a robust European legal framework”. Her report, approved by 17 votes to 2, with 2 abstentions, looks at robotics-related issues such as liability, safety and changes in the labour market. MEPs stress that EU-wide rules are needed to fully exploit the economic potential of robotics and artificial intelligence and guarantee a standard level of safety and security. 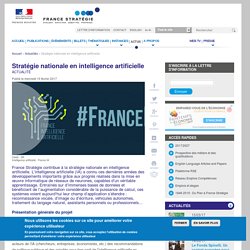 Although the paper is described as a “discussion paper”, it makes a number of recommendations that those involved in big data projects would be well advised to incorporate into their projects, and it firmly rejects suggestions that either the existing data protection framework or the GDPR cannot be applied in this context. The paper works through the implications of big data against the core data protection principles; it then discusses compliance tools that can be used to meet those implications (including a useful analysis of how its current Privacy Impact Assessment Code of Practice is still fit for purpose under the GDPR and for big data projects). It concludes with six key recommendations. The ICO’s Six Recommendations. The Rise of AI Makes Emotional Intelligence More Important.

The booming growth of machine learning and artificial intelligence (AI), like most transformational technologies, is both exciting and scary. It’s exciting to consider all the ways our lives may improve, from managing our calendars to making medical diagnoses, but it’s scary to consider the social and personal implications — and particularly the implications for our careers. As machine learning continues to grow, we all need to develop new skills in order to differentiate ourselves. But which ones? It’s long been known that AI and automation/robotics will change markets and workforces. La place de l’homme face à l’intelligence artificielle. Stephen Hawking - will AI kill or save humankind? Image copyright Getty Images Two years ago Stephen Hawking told the BBC that the development of full artificial intelligence, could spell the end of the human race.

His was not the only voice warning of the dangers of AI - Elon Musk, Bill Gates and Steve Wozniak also expressed their concerns about where the technology was heading - though Professor Hawking's was the most apocalyptic vision of a world where robots decide they don't need us any more. What all of these prophets of AI doom wanted to do was to get the world thinking about where the science was heading - and make sure other voices joined the scientists in that debate. That they have achieved that aim was evident on Wednesday night at an event in Cambridge marking the opening of the Centre for the Future of Intelligence, designed to do some of that thinking about the implications of AI.

And Professor Hawking was there to help launch the centre. Putting Digital Ethics on the Map - Digit. As Digital Transformation professionals, we have worked hard at the digital transformation of many industries and sectors. The early years of the digital revolution just past proves that people have embraced technology. We’ve driven digitisation, automation, augmentation, disinter-mediation and mobilisation – changes that mean everything is connected, what was dumb is now intelligent, and performance is reaching perfection. Home - The Alan Turing Institute. Will Democracy Survive Big Data and Artificial Intelligence? Editor’s Note: This article first appeared in Spektrum der Wissenschaft, Scientific American’s sister publication, as “Digitale Demokratie statt Datendiktatur.”

“Enlightenment is man’s emergence from his self-imposed immaturity. Immaturity is the inability to use one’s understanding without guidance from another.” —Immanuel Kant, “What is Enlightenment?” (1784) The digital revolution is in full swing. Everything will become intelligent; soon we will not only have smart phones, but also smart homes, smart factories and smart cities. We must automate humanity - Chris Skinner's blog. Building on yesterday’s blog, there was another interesting debate about the risks of humans in the network. Humans screw up. Humans cause problems. Humans have emotions.

Humans are not welcome here. A good example of why humans are not welcome is that it is typically human error that causes issue. You get the point. A machine can process things far more effectively than a human. A human can let people through a border control because they look like their passport photo; a machine will recognise that they’re not that person. Reflections on artificial intelligence and ecosystems … while wearing my “Techticism” detector hat (Part 1) – Gregory Bufithis. Réunion plénière (OPECST) Elon Musk: artificial intelligence is our biggest existential threat. Elon Musk has spoken out against artificial intelligence (AI), declaring it the most serious threat to the survival of the human race.

Musk made the comments to students from Massachusetts Institute of Technology (MIT) during an interview at the AeroAstro Centennial Symposium, talking about computer science, AI, space exploration and the colonisation of Mars. “I think we should be very careful about artificial intelligence. If I had to guess at what our biggest existential threat is, it’s probably that. So we need to be very careful,” said Musk. “I’m increasingly inclined to think that there should be some regulatory oversight, maybe at the national and international level, just to make sure that we don’t do something very foolish.” He recently described his investments in AI research as “keeping an eye on what’s going on”, rather than viable return on capital. Bill Gates: the robot that takes your job should pay taxes — Quartz. Robots are taking human jobs. Berkman Klein Center. Top 9 ethical issues in artificial intelligence.

Optimizing logistics, detecting fraud, composing art, conducting research, providing translations: intelligent machine systems are transforming our lives for the better. One Hundred Year Study on Artificial Intelligence (AI100) Knight Foundation. Introducing OpenAI. Robots: Legal Affairs Committee calls for EU-wide rules. EU rules for the fast-evolving field of robotics, to settle issues such as compliance with ethical standards and liability for accidents involving driverless cars, should be put forward by the EU Commission, urged the Legal Affairs Committee on Thursday. EU to vote on declaring robots to be ‘electronic persons‘ MEPs have voted to propose granting legal status to robots, categorising them as “electronic persons” and warning that new legislation is needed to focus on how the machines can be held responsible for their “acts or omissions”. Europe mulls treating robots legally as people ... but with kill switches. Mady Delvaux : « Un cadre légal en matière de robotique est nécessaire »