PcDuino is a high performance, cost effective mini PC platform that runs PC like OS such as Ubuntu and Android ICS.

How to: Home Automation - connect 8 channel relay + Raspberry Pi. PcDuino - Dev Board - DEV-11712. Description: As the field of embedded electronics gets more advanced, hobbyists and professionals are both in need of smaller and more powerful computers. 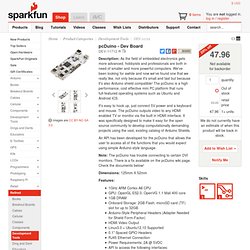 We've been looking for awhile and now we've found one that we really like, not only because it's small and fast but because it's also Arduino shield compatible! The pcDuino is a high performance, cost effective mini PC platform that runs full-featured operating systems such as Ubuntu and Android ICS. It's easy to hook up, just connect 5V power and a keyboard and mouse. The pcDuino outputs video to any HDMI enabled TV or monitor via the built in HDMI interface. It was specifically designed to make it easy for the open source community to develop computationally demanding projects using the vast, existing catalog of Arduino Shields. An API has been developed for the pcDuino that allows the user to access all of the functions that you would expect using simple Arduino-style language. Programming the pcDuino. Favorited Favorite 0 Introduction The beauty of the pcDuino lies in its extraordinarily well exposed hardware peripherals. 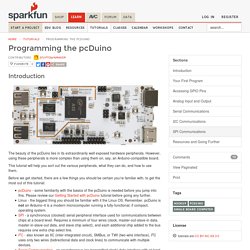 However, using these peripherals is more complex than using them on, say, an Arduino-compatible board. This tutorial will help you sort out the various peripherals, what they can do, and how to use them. Before we get started, there are a few things you should be certain you’re familiar with, to get the most out of this tutorial: pcDuino - some familiarity with the basics of the pcDuino is needed before you jump into this. All of the code in this tutorial can be found online, in our pcDuino Github repository. Your First Program. Linux Embedded Devices Comparison: Yun, BeagleBoard, Rascal, Raspi, Cubieboard & pcDuino. Awaiting for the new release, Arduino Yun, I think it's very interesting to know more about the new linux devices in the market. 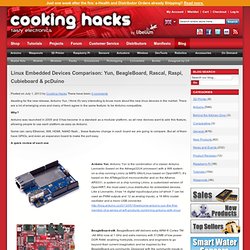 There are a lot of emerging ones and many of them agree in the same feature: to be Arduino-compatible. Why? Arduino was launched in 2005 and it has become in a standard as a modular platform, so all new devices want to add this feature, allowing people to use each platform as easy as Arduino. Some can carry Ethernet, Wifi, HDMI, NAND flash... these features change in each board we are going to compare.

But all of them have GPIOs, and even an expansion board to make the port easy. A quick review of each one Which one should I choose? As I said in my previous post, comparing Arduino Yun and Raspberry Pi, it depends of your final purpose: Arduino compatible: if you are looking for a direct Arduino compatible device, there are 5 options. » pcDuino – Competition That Could Take On The Raspberry Pi RaspberryPiHaX. In all forms of life, there is nothing wrong with some healthy competition and in the micro computer form of life, this comes in the form of pcDuino, which from the specifications, seems like Raspberry Pi on steroids, below i will post some quotes, specifications and images: pcDuino is a high performance, cost effective mini PC platform that runs PC like OS such as Ubuntu and Android ICS. 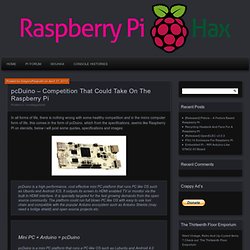 It outputs its screen to HDMI enabled TV or monitor via the built in HDMI interface. It is specially targeted for the fast growing demands from the open source community. The platform could run full blown PC like OS with easy to use tool chain and compatible with the popular Arduino ecosystem such as Arduino Shields (may need a bridge shield) and open source projects etc.

PcDuino. Tutorials. Flask is a Python web framework that can turn pcDuino into a dynamic web server. 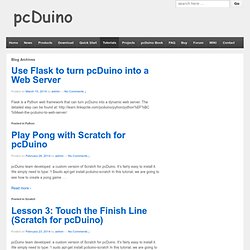 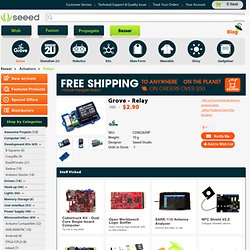 I want to turn on a 12V Light from this relay. Do I need to have a transistor as well. You can use the Relay separately without other components . Temperature sensor LM35 on pcDuino. LM35 Linear Temperature Sensor can be used to detect ambient air temperature. 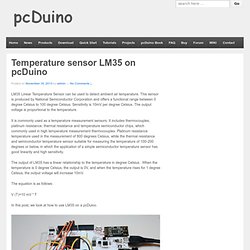 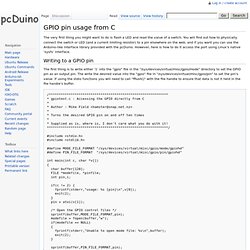 You will find out how to physically connect the switch or LED (and a current limiting resistor) to a pin elsewhere on the web, and if you want you can use the Arduino-like interface library provided with the pcDuino. However, here is how to do it access the port using Linux's native 'sysfs' interface. PcDuino is a high performance, cost effective mini PC platform that runs PC like OS such as Ubuntu and Android ICS.