How do I download and install 32-bit Java for Linux? Java Plugin on Linux. See JDK 7 and JRE 7 Installation Guide for general information about installing JDK 7 and JRE 7.

When you install the Java platform, the Java plugin file is included as part of that install. If you want to use Java within Firefox, you need to manually create a symbolic link from the plugin file in the release to one of the locations that Firefox expects. To make the plugin available to all users, create the link inside of the Firefox application's directory, in the plugins subdirectory. Alternatively, you can create the symbolic link in your home directory, in ~/.mozilla/plugins. In the remainder of this document, the text, "Firefox plugins directory", implies either of these locations. Note: For Firefox version 21 and higher, you must create the symbolic link in your home directory, ~/.mozilla/plugins. This release provides the Next-Generation Java plugin. The locaton of the plugin file for Linux varies according to the chip architecture of the underlying platform. 1. 2. What are the Linux 64-bit installation instructions for Java ? 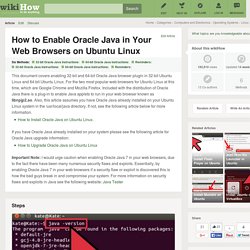 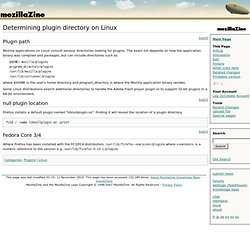 The exact list depends on how the application binary was compiled and packages, but can include directories such as $HOME/.mozilla/pluginsprogram_directory/plugins/usr/lib/mozilla/plugins/usr/lib/xulrunner/plugins. Java. Introduction Java is a technology originally developed by Sun Microsystems, and acquired by Oracle. 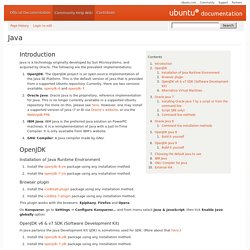 The following are the prevalent implementations: OpenJDK: The OpenJDK project is an open-source implementation of the Java SE Platform. Install Oracle Java 7 in Ubuntu via PPA Repository. Update: Java 7 is no longer supported by Oracle. 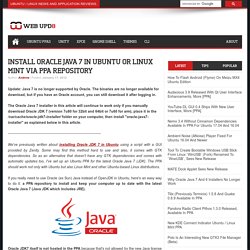 The binaries are no longer available for download, but if you have an Oracle account, you can still download it after logging in. The Oracle Java 7 installer in this article will continue to work only if you manually download Oracle JDK 7 (version 7u80 for 32bit and 64bit or 7u60 for arm), place it in the /var/cache/oracle-jdk7-installer/ folder on your computer, then install "oracle-java7-installer" as explained below in this article.

We've previously written about installing Oracle JDK 7 in Ubuntu using a script with a GUI provided by Zenity. Some may find this method hard to use and also, it comes with GTK dependencies. Install Oracle Java 8 In Ubuntu Via PPA Repository [JDK8] The Oracle JDK License has changed for releases starting April 16, 2019.The new Oracle Technology Network License Agreement for Oracle Java SE is substantially different from prior Oracle JDK licenses. 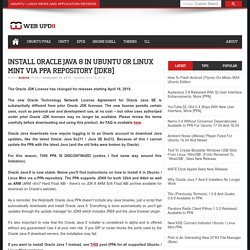 The new license permits certain uses, such as personal use and development use, at no cost -- but other uses authorized under prior Oracle JDK licenses may no longer be available. Please review the terms carefully before downloading and using this product. An FAQ is available here.Oracle Java downloads now require logging in to an Oracle account to download Java updates, like the latest Oracle Java 8u211 / Java SE 8u212. Because of this I cannot update the PPA with the latest Java (and the old links were broken by Oracle).For this reason, THIS PPA IS DISCONTINUED (unless I find some way around this limitation). Oracle Java 8 is now stable. Installation - How do I install Oracle Java JDK 7. Jcontrol (about oracle) How to Install Oracle Java JDK 8 in Ubuntu 15.04 14.10 14.04 13.04 12.04. JavaPackage.

Translation(s): English - español Debian recommends the use of OpenJDK packages (openjdk-7-jdk / openjdk-7-jre) instead of non-free packages created by this utility. java-package provides the ability to build a Debian package from a Java binary distribution by running make-jpkg <java binary archive file> (with archive files downloaded from providers listed below). 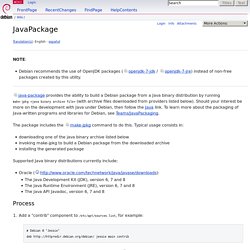 Should your interest be more on the development with Java under Debian, then follow the Java link. To learn more about the packaging of Java-written programs and libraries for Debian, see Teams/JavaPackaging. The package includes the make-jpkg command to do this. Résultats de la recherche de paquets. You have searched for packages that names contain java-package in all suites, all sections, and all architectures. 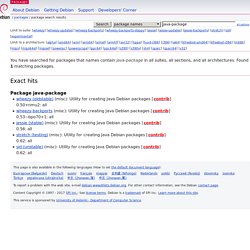 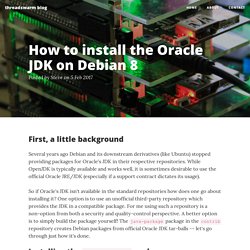 While OpenJDK is typically available and works well, it is sometimes desirable to use the official Oracle JRE/JDK (especially if a support contract dictates its usage). So if Oracle's JDK isn't available in the standard repositories how does one go about installing it? One option is to use an unofficial third-party repository which provides the JDK in a compatible package. For me using such a repository is a non-option from both a security and quality-control perspective. Installing the java-package package Installing the java-package package, along with several required dependencies, can be done using either apt-get or aptitude, depending on preference. Please ensure that you have the contrib repository enabled before proceeding! Install using apt-get Or install using aptitude Building the custom JDK package That's it! Es/JavaPackage. How to (Easily) Install Java on Ubuntu – ThisHosting.Rocks. It’s a pretty straightforward and easy process, and we’ll show you step-by-step instructions on how to install Java on Ubuntu.

The instructions would work for Ubuntu 14.04, 16.04, 18.04, and any other LTS release. This should work for any Ubuntu-based distro, even non-LTS versions like 17.10, but they were tested on Ubuntu 16.04. They should work on both servers and desktops. In a hurry? Click here and follow the instructions. Before we begin installing Java Some things you’ll need before we start installing Java: An Ubuntu server. So that’s pretty much it. There are multiple ways of installing Java We’ll order them based on difficulty (easiest first):