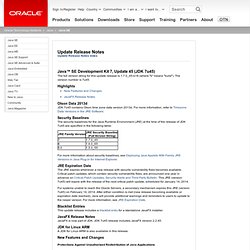 The version number is 7u45. Highlights Olson Data 2013d JDK 7u45 contains Olson time zone data version 2013d. Security Baselines The security baselines for the Java Runtime Environment (JRE) at the time of the release of JDK 7u45 are specified in the following table: For more information about security baselines, see Deploying Java Applets With Family JRE Versions in Java Plug-in for Internet Explorer. JRE Expiration Date The JRE expires whenever a new release with security vulnerability fixes becomes available. For systems unable to reach the Oracle Servers, a secondary mechanism expires this JRE (version 7u45) on February 14, 2014. Blacklist Entries This update release includes a blacklist entry for a standalone JavaFX installer.

JavaFX Release Notes JavaFX is now part of JDK. JDK for Linux ARM A JDK for Linux ARM is also available in this release. New Features and Changes. Setting the Security Level of the Java Client. Contents As of the JDK 7u10 release, a user may control, via the Java Control Panel, the level of security that will be used when running Java apps in a browser. 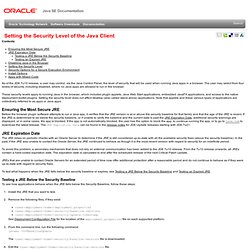 The user may select from four levels of security, including disabled, where no Java apps are allowed to run in the browser. Using APPLET, OBJECT and EMBED Tags. This chapter includes the following topics: Introduction This chapter explains to HTML authors how and when to use the applet, object, and embed tags to add Java applets to Web pages. 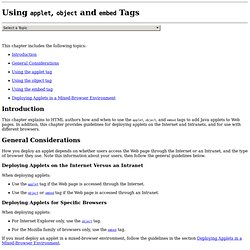 The Java Network Launch Protocol (JNLP) enables an application to be launched on a client desktop by using resources that are hosted on a remote web server. 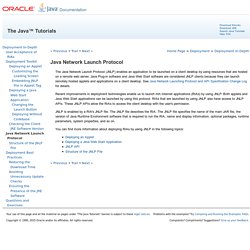 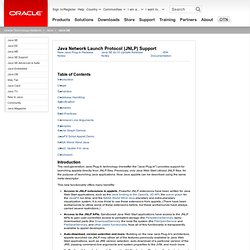 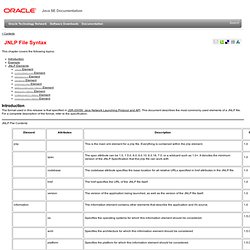 Medieval Code - Java Web Start (jnlp) simple example. UPDATE (2013/05/28): Since most people already know, WebStart is a bit of a crappy piece of tech with a bunch of limitations. 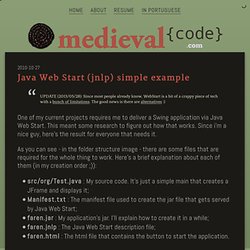 The good news is there are alternatives :) One of my current projects requires me to deliver a Swing application via Java Web Start. This meant some research to figure out how that works. Since i’m a nice guy, here’s the result for everyone that needs it. As you can see - in the folder structure image - there are some files that are required for the whole thing to work. 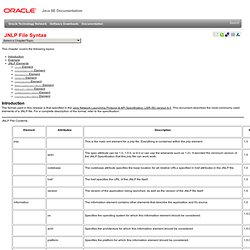 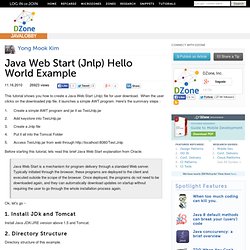 When the user clicks on the downloaded jnlp file, it launches a simple AWT program. Here's the summary steps : Create a simple AWT program and jar it as TestJnlp.jar Add keystore into TestJnlp.jar Create a Jnlp file Put it all into the Tomcat Folder Access TestJnlp.jar from web through Before starting this tutorial, lets read this brief Java Web Start explanation from Oracle. Java Web Start is a mechanism for program delivery through a standard Web server. Typically initiated through the browser, these programs are deployed to the client and executed outside the scope of the browser. Ok, let's go ~ 1.