Chapelle de Fuveau. Direct - étude-biblique.com. Lueur - Un éclairage sur la Foi. CLE - Centre Languedoc Evangile. Some churches of Christ in France. The Barnabas Ministry. Restoration Movement - Wikipedia. The Restoration Movement (also known as the American Restoration Movement or the Stone-Campbell Movement, and pejoratively as Campbellism) is a Christian movement that began on the United States frontier during the Second Great Awakening (1790–1840) of the early 19th century. 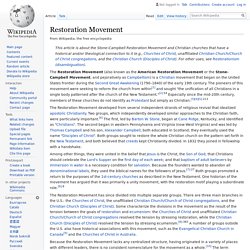 The pioneers of this movement were seeking to reform the church from within and sought "the unification of all Christians in a single body patterned after the church of the New Testament. "[2]:54 Especially since the mid-20th century, members of these churches do not identify as Protestant but simply as Christian.[3][4][5]:213 Among other things, they were united in the belief that Jesus is the Christ, the Son of God; that Christians should celebrate the Lord's Supper on the first day of each week; and that baptism of adult believers by immersion in water is a necessary condition for salvation. Key principles[edit] The Restoration Movement has been characterized by several key principles: Background influences[edit] Churches of Christ - Wikipedia. The Restoration ideal was also similar and somewhat connected to earlier restoration efforts in Europe (such as those of John Glas, Robert Haldane, and James Haldane), as well as Puritan movements in colonial America. 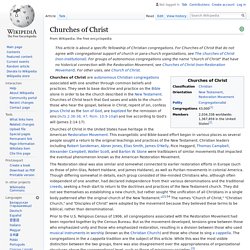 Though differing somewhat in details, each group consisted of like-minded Christians who, although often independent of one another, had declared independence from their various denominations and the traditional creeds, seeking a fresh start to return to the doctrines and practices of the New Testament church. 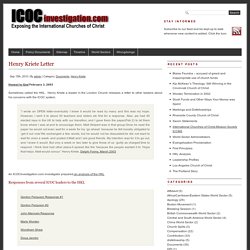 Henry Kriete a leader in the London Church releases a letter to other leaders about his concerns with the ICOC system. “I wrote an OPEN letter-eventually I knew it would be read by many and this was my hope. However, I sent it to about 30 teachers and elders etc first for a response. An ICOCInvestigation.com investigator prepared an analysis of the HKL Responses from several ICOC leaders to the HKL Gordon Ferguson Response #1Gordon Ferguson #2John Mannels ResponseMarty WootenWyndham ShawDoug Jacoby 2005 – Henry wrote another letter.

Stories from the ICC: Henry Kriete. Revolution through repentance and freedom in Christ by Henry Kriete (Final Version, February 2, 2003) 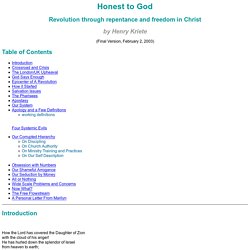 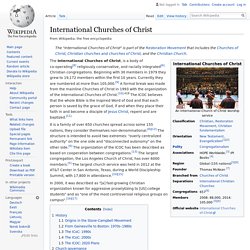 Beginning with 30 members in 1979 they grew to 19,172 members within the first 10 years. Currently they are numbered at more than 105,000.[9] A formal break was made from the mainline Churches of Christ in 1993 with the organization of the International Churches of Christ.[10]:418 The ICOC believes that the whole Bible is the inspired Word of God and that each person is saved by the grace of God, if and when they place their faith in and become a disciple of Jesus Christ, repent and are baptized.[11] In 2000, it was described as "[a] fast-growing Christian organization known for aggressive proselytizing to [US] college students" and as "one of the most controversial religious groups on campus".[16][17] Kip McKean - Wikipedia. Thomas Wayne "Kip" McKean II (born May 31, 1954) is a former minister of the International Churches of Christ and is a current minister of the City of Angels International Christian Church and World Missions Evangelist of the International Christian Churches, also known as the "Portland/Sold-Out Discipling Movement".[1] Early life and family[edit] McKean was born in Indianapolis, Indiana. 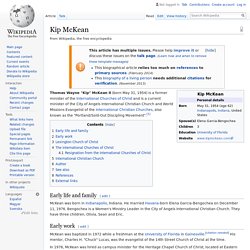 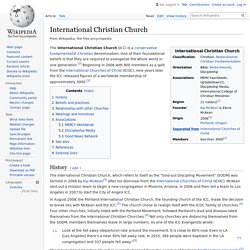 One of their foundational beliefs is that they are required to evangelize the whole world in one generation.[3] Beginning in 2006 with 800 members as a split from the International Churches of Christ (ICOC), nine years later the ICC released figures of a worldwide membership of approximately 3000.[3] History[edit] The International Christian Church, which refers to itself as the "Sold-out Discipling Movement" (SODM) was formed in 2006 by Kip McKean[4] after his dismissal from the International Churches of Christ (ICOC). McKean sent out a mission team to begin a new congregation in Phoenix, Arizona, in 2006 and then led a team to Los Angeles in 2007 to start the City of Angels ICC.. History Of The Movement by Kip Mckean - EMC 2016. Living in the Book of Acts pt. 2.