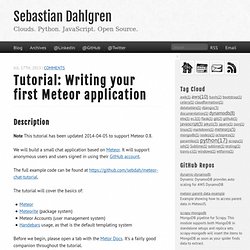 We will build a small chat application based on Meteor. It will support anonymous users and users signed in using their GitHub account. The full example code can be found at The tutorial will cover the basics of: MeteorMeteorite (package system)Meteor Accounts (user management system)Handebars usage, as that is the default templating system Before we begin, please open a tab with the Metor Docs. Install basic requirements Install Meteor First off, install Meteor itself by entering the following in your terminal.

It will download and install Meteor for you. Install Meteorite Meteorite is a packagemanager for Meteor. Hint: If `npm` is not available, please install Node.JS from first. Building the application Alright, now that you have the basic components installed, let’s get started with the actual development. Project structure Let’s create the project Now create two folders instead: Writing the HTML template Full code. Tutorial - Getting Started With Node.js, Express, MongoDB. Asynchronous Programming with Async and Await (C# and Visual Basic) Asynchrony is essential for activities that are potentially blocking, such as when your application accesses the web. 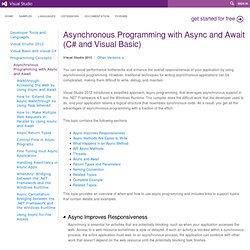 Access to a web resource sometimes is slow or delayed. If such an activity is blocked within a synchronous process, the entire application must wait. In an asynchronous process, the application can continue with other work that doesn't depend on the web resource until the potentially blocking task finishes. The following table shows typical areas where asynchronous programming improves responsiveness. The listed APIs from the .NET Framework 4.5 and the Windows Runtime contain methods that support async programming.

Asynchrony proves especially valuable for applications that access the UI thread because all UI-related activity usually shares one thread. When you use asynchronous methods, the application continues to respond to the UI. The following example shows an async method. String urlContents = await client.GetStringAsync(); Each returned task represents ongoing work. MVVM AsyncDelegateCommand – what async/await can do for UI development. It is all about User Experience (UX) these days. 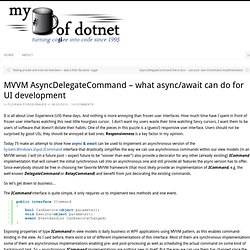 And nothing is more annoying than frozen user interfaces. How much time have I spent in front of frozen user interfaces watching this neat little hourglass cursor. I don’t want my users waste their time watching fancy cursors, I want them to be users of software that doesn’t dictate their habits. One of the pieces in this puzzle is a (guess!) Responsive user interface. Today I’ll make an attempt to show how async & await can be used to implement an asynchronous version of the System.Windows.Input.ICommand interface that drastically simplifies the way we can use asynchronous commands within our view models (in an MVVM sense).

So let’s get down to business… The ICommand interface is quite simple, it only requires us to implement two methods and one event. Exposing properties of type ICommand in view models is daily business in WPF applications using MVVM pattern, as this enables command-binding in the view. It reads like what it does. A C# implementation of the Reingold-Tilford tree layout algorithm for HeuristicLab. Generate a panorama. Restriction of maximum width to 14400 Pixel (= horizontal extension 360° with zoom factor 2) 14.05.2011 - In recent days, the requests have increased massively to this application. 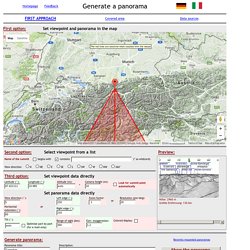 The application runs on a home computer with a quad processor and 4 MB memory, connected to the outside world with DSL 6000, i.e. outbound with max. 750 bits/s, on which my son also is playing FIFA11 and so on. So I ask you for your understanding that nothing will change without your contribution. Professional Running Blog.