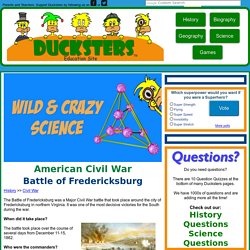 It was one of the most decisive victories for the South during the war. Battle of Fredericksburgby Kurz & Allison When did it take place? The battle took place over the course of several days from December 11-15, 1862. Who were the commanders? The Union Army of the Potomac was commanded by General Ambrose Burnside. The Confederate Army of Northern Virginia was led by General Robert E. Before the Battle After appointing General Burnside as commander of the Union Army, President Lincoln urged his new general to launch a major attack on the Confederate forces in Virginia. Unfortunately, Burnside's plan was doomed from the start. The Battle On December 11, 1862, the Union began to assemble the pontoon bridges. 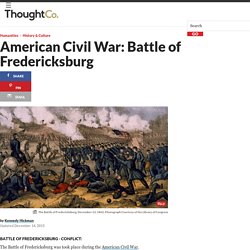 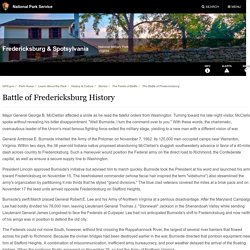 McClellan affected a smile as he read the fateful orders from Washington. Turning toward his late night visitor, McClellan spoke without revealing his bitter disappointment. "Well Burnside, I turn the command over to you. " With these words, the charismatic, overcautious leader of the Union's most famous fighting force exited the military stage, yielding to a new man with a different vision of war. General Ambrose E. President Lincoln approved Burnside's initiative but advised him to march quickly. Burnside's swift March placed General Robert E. The Federals could not move South, however, without first crossing the Rappahannock River, the largest of several river barriers that flowed across his path to Richmond.

Battle Of Fredericksburg. Much has been written about the ill-starred soldiers of the Army of the Potomac who died at the Battle of Fredericksburg, Virginia, on December 13, 1862, in a doomed attempt to drive the Confederates from Marye’s Heights. 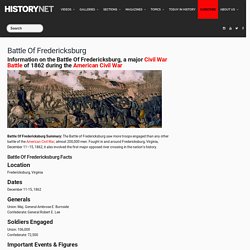 But few accounts detail the equally brave if futile sacrifice of Brigadier General John Gibbon’s 2nd Division on the plains south of the Rappahannock River that sleet-driven day. At best, the story of the 2nd Division has been relegated in history books to a supporting role in the hopeless Union attack. At worst, the division’s repulse by Stonewall Jackson’s corps has been unfairly blamed on the men themselves. Most of the regiments in Gibbon’s division that day came from Pennsylvania, New York and Massachusetts. The men were veterans of the vicious Virginia campaigns of 1862, including the battles of Second Manassas and Cedar Mountain. On November 14, 1862, near Warrenton, Va., Brig. The next morning, I and VI Corps, making up the Left Grand Division of Maj. Battle of Fredericksburg - American Civil War. My TV provider is not listed. 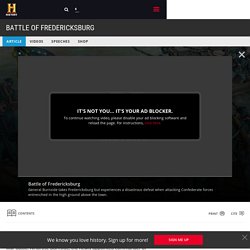 Why not? We are currently working on adding more TV providers. Please check back frequently to see if your TV provider has been added. Why do I need to log in to watch some video content? Viewers who verify their subscription to a TV provider get access to a deeper catalog of video content, including more full episodes. I am able to watch on TV. This service is only available through participating TV providers. How much does it cost to access all of the video content? Accessing video content is free, however, you will need to verify your TV provider subscription by logging in in order to access all of our video content. Can I watch videos if my TV provider isn't currently supported? Yes! What kind of programming is available if I log in? You will get access to more full episodes than ever before. How often is new video added to the website? There will be new episodes and web exclusives added every day.

How quickly does a new episode get added after it airs on TV?