The Lectures of Dr. David Neiman

Dr. David Neiman was a biblical historian, internationally renowned scholar, speaker and writer who inspired many people. Dr. Neiman was the author of The Book of Job, Domestic Relations in Antiquity and the unpublished Mink Shmink - the influence of the Yiddish language in the US, which is part of a comprehensive study of the history of Jewish languages. He also wrote an article for the Encyclopedia Judaica, as well as contributing to many university journal publications. His lectures were recorded by his daughter, producer / director Becky Neiman, in 2000. Many of the segments are available on the YouTube channel DrDavidNeiman including complete lectures. Videos are also available for purchase via download directly on the drdavidneiman.com web site or through Amazon.com

Code Hammurabi, When Revenge Becomes The Law. What would the world be like, if those mafia stories ever became law? 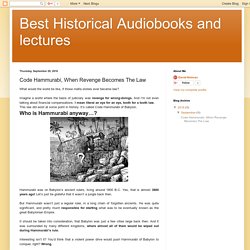 Imagine a world where the basis of judiciary was revenge for wrong-doings. And I’m not even talking about financial compensations. I mean literal an eye for an eye, tooth for a tooth law. This law did exist at some point in history. It’s called Code Hammurabi of Babylon. Who is Hammurabi anyway…? Hammurabi was on Babylon’s ancient rulers, living around 1800 B.C. But Hammurabi wasn’t just a regular ruler, in a long chain of forgotten ancients.

It should be taken into consideration, that Babylon was just a few cities large back then. Interesting isn’t it? The wars that wiped out neighboring kingdoms, and established and expanded Babylon, were basically a series of revenge matches… At least we now know where the vengeful mindset comes from. Getting to know the history of the talmud. Genesis – The Israelite View. Now as we examine the biblical list in Genesis 5, which closely follows the Babylonian king list, we find a rejection of the former view. 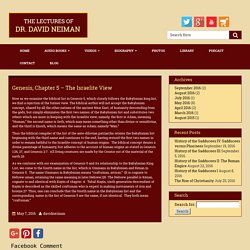 The biblical author will not accept the Babylonian concept, shared by all the other nations of the ancient Near East, of humanity descending from the gods, but simply eliminates the first two names of the Babylonian list and substitutes two others which are more in keeping with the Israelite view; namely, the first is Adam, meaning “Human,” the second name is Seth, which may mean something other than divine or semidivine, and the third is Enosh, which means the same as Adam; namely “Man.” 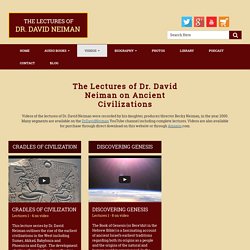 In the eight-part series Discovering Genesis, the late David Neiman, professor of Jewish theology at Boston College, expertly guides you through the book’s first chapters—from the story of creation to the Tower of Babel—to examine how the Biblical writers grappled with the fundamentall questions and mysteries of the shared human experience: Where do we come from? Who are we? What makes us different? How did civilization come about? The Book of Exodus - The Bible Story By Dr. David Neiman. Understanding Prehistoric and Ancient Human Societies. The African continent is one of the cradles of world civilization – and that’s a fact! Around first or perhaps second grade, we find out that there are seven continents: The North American Continent, South America, Asian countries, European countries, Antarctica, together with Australia. 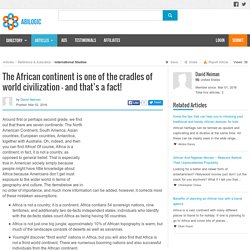 Oh, indeed, and then you can find Africa! Of course, Africa is a continent; in fact, it is not a country, as opposed to general belief. That is especially true in American society simply because people might have little knowledge about Africa because Amercians don’t get must exposure to the wider world in terms of geography and culture. The itemsbelow are in no order of importance, and much more information can be added, however, it corrects most of these mistaken assumptions: Africa is not a country; it is a continent.

Africa is usually referred to as the "Lost Continent," however it is not lost, it is essentially not recognized for its numerous actual contributions to history. The "Lucy" skeleton, for instance, was estimated to be over 3.2 million years old. Final words. There are so many things to learn if you really want to know about Ancient Societies. Any time we use of the word “ancient” it conjures up terms like oldschooland antiquated. 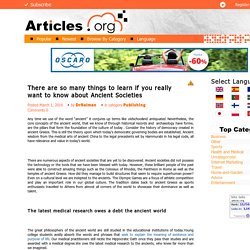 Nevertheless, the core concepts of the ancient world, that we know of through historical records and archaeology have forme, are the pillars that form the foundation of the culture of today . Consider the history of democracy created in ancient Greece. This is still the theory upon which today’s democratic governing bodies are established. Ancient wisdom from the medical arts of ancient China to the legal precedents set by Hammurabi in his legal code, all have relevance and value in today’s world. There are numerous aspects of ancient societies that are yet to be discovered. The Cradle of Civilization - Dr. David Neiman. Best Historical Audiobooks and lectures - Dr. David Neiman. More about the lectures of Dr. 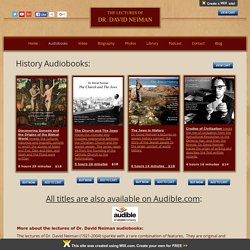 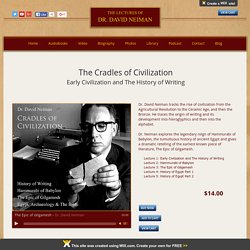 David Neiman tracks the rise of civilization from the Agricultural Revolution to the Ceramic Age, and then the Bronze. He traces the origin of writing and its development into hieroglyphics and then into the alphabet. Understanding Ancient Societies - Dr. David Neiman.