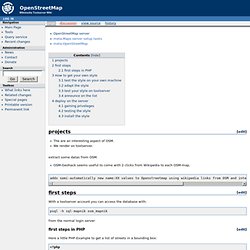 We render on toolserver. extract some datas from OSM. OSM-Geohack seems useful to come with 2 clicks from Wikipedia to each OSM-map. adds semi-automatically new name:XX values to Openstreetmap using wikipedia links from OSM and interlanguage links from the Wikipedias. [edit] first steps With a toolserver account you can access the database with: psql -h sql-mapnik osm_mapnik from the normal login server [edit] first steps in PHP Here a little PHP-Example to get a list of streets in a bounding box: [edit] How to get your own style thanks to river we have a quite nice rendeing stack on willow.

To show the capabilities of the new hstore scheme in conjunction with the rendering system, I created a style that renders surveillance cctvs on a transparent overlay. To render a map of germany in this style, just log on to willow and call render --bbox 5.56,55.04,15.35,47.15 --style /home/mazder/styles/surveillance/surveillance.xml --size 2000x2000. Mapping Layer - Africa in English. Map internationalization.

OpenStreetMap. "Wikipedia of maps" challenges Google. OpenStreetMap is exactly what its name implies—a wiki of maps and location data to which anyone can contribute, just like Wikipedia. 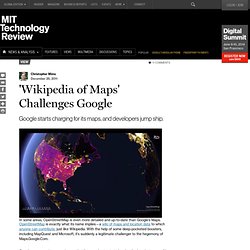 With the help of some deep-pocketed boosters, including MapQuest and Microsoft, it’s suddenly a legitimate challenger to the hegemony of Maps.Google.Com. Google announced two months ago that it was going to start charging the heaviest users of its Maps API, which countless sites use to geo-locate their data. Then its sales team fanned out to contact those websites, which Google publicly estimated would represent only 0.35 percent of the users of its Maps API. In what seems to have been a surprise to everyone, the prices that Google asked of its heaviest Maps users apparently dwarf the revenue of at least some of those sites, which is leading to a very public move away from Google and to OpenStreetMap.

OpenStreetMap’s great strength is that anyone can contibute. That doesn’t mean that OpenStreetMap is necessarily free. OSMstats - Statistics of the free wiki world map. 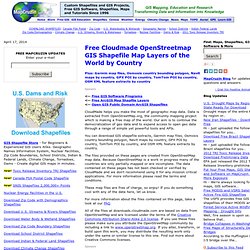 Data is extracted from OpenStreetMap.org, the community mapping project which is making a free map of the world. Our aim is to continue the democratization of geo data and to expand access to open geo data through a range of simple yet powerful tools and APIs. You can download GIS shapefile extracts, Garmin map files, Osmosis country bounding polygon, Navit maps by country, GPX POI by country, TomTom POI by country, and OSM XML feature extracts by country. The files provided on these pages are created from OpenStreetMap map data. These map files are free of charge, so enjoy! For more information about the files contained on this page, take a look at our FAQ.

Begin your downloads here: Didn't find what you are looking for? If you have data, GIS project or custom shapefile needs send me an email. Contact Us. GeoFabrik.