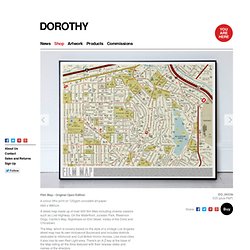 The Map, which is loosely based on the style of a vintage Los Angeles street map has its own Hollywood Boulevard and includes districts dedicated to Hitchcock and Cult British Horror movies. Like most cities it also has its own Red Light area. There's an A-Z key at the base of the Map listing all the films featured with their release dates and names of the directors. Original open edition litho print for £25 plus p&p Alternatively buy the Limited Edition print for £100 plus P&P > Atlas for The Blind 1837. The Atlas of the United States Printed for the Use of the Blind was published in 1837 for children at the New England Institute for the Education of the Blind in Boston. 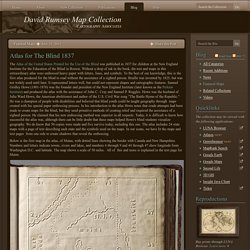 Without a drop of ink in the book, the text and maps in this extraordinary atlas were embossed heavy paper with letters, lines, and symbols. To the best of our knowledge, this is the first atlas produced for the blind to read without the assistance of a sighted person. Braille was invented by 1825, but was not widely used until later. It represented letters well, but could not represent shapes and cartographic features. Directions Magazine - GIS, Geospatial, News. OrdSurv: Welcome to Mapzone. Mercator map puzzle. Languages mapped in the UK. Turn autoplay off Edition: <span><a href=" Sign in Beta About us Today's paper Subscribe Custom Search Languages mapped: what do people speak where you live? 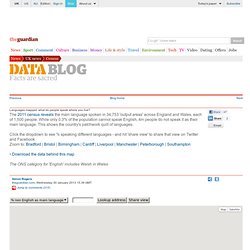 The online service has been developed jointly by the European Environment Agency (EEA), an EU body and a leading environmental network and information partner, the geographic information system developer Esri and Microsoft. 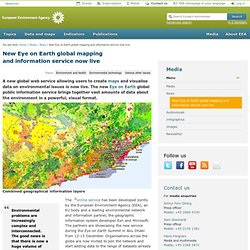 The partners are showcasing the new service during the Eye on Earth Summit in Abu Dhabi from 12-15 December. Organisations across the globe are now invited to join the network and start adding data to the range of datasets already available. The web service takes the form of online maps, which can be manipulated by users. Without the need for any technical training, people can choose to add a huge variety of layers to the map – for example showing pollution, social development, economic factors, land use, transport and so on – to create new insights. The creators of Eye on Earth hope to add other data visualisation functions in the future, alongside the mapping tools. The web service is aimed at everyone, from scientists to academics, NGOs to individuals. Welcome to Eye On Earth. End of the road for paper maps? Every line becomes a circle line: a new way to see the tube map. There have been quite a few variations of the iconic London Underground map in the past but Dr Max Roberts has now created a design based on concentric circles. 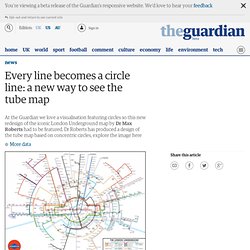 In his guest blog on the Going Underground blog, Dr Roberts writes: ""With the new orbital loop surrounding Central London, some people are suggesting a mapping approach based on circles to emphasise this feature. There is nothing new here, and Berlin, Paris, Moscow and Madrid have all received this treatment in the past. Grounding a map in familiar shapes such as circles can make it easy to comprehend.

" However he does also state that it is possible to "push a design priority too far". Explore the map above by clicking on the image to see a full screen version and read Dr Robert's guest post on the Going Underground blog for more detail on the map design. Who made this graphic? More data More data journalism and data visualisations from the Guardian World government data • Search the world's government data with our gateway. Circular Tube Map by Max Roberts.