Geo Maps & Stats. GeoVISTA Center. IndieMapper. Home - ChartsBin.com. Madewulf/MigrationsMap.net. HTML5: Flow map of internal migration in England & Wales. At the start of this year, I wrote a brief post on how we’ve been looking closely at the emergence of HTML5 as a visualisation platform. 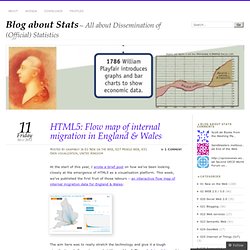 This week, we’ve published the first fruit of those labours – an interactive flow map of internal migration data for England & Wales: The aim here was to really stretch the technology and give it a tough visualisation challenge to see what it’s capable of. Fast Thinking and Slow Thinking Visualisation. Last week I attended the Association of American Geographers Annual Conference and heard a talk by Robert Groves, Director of the US Census Bureau. 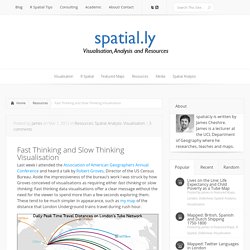 Aside the impressiveness of the bureau’s work I was struck by how Groves conceived of visualisations as requiring either fast thinking or slow thinking. Fast thinking data visualisations offer a clear message without the need for the viewer to spend more than a few seconds exploring them. These tend to be much simpler in appearance, such as my map of the distance that London Underground trains travel during rush hour. Area Cartogram Maps Explored. Area cartogram maps are maps of non-absolute space where the areal extent is in proportion to some measured value. 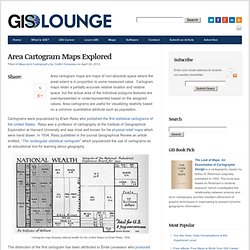 Cartogram maps retain a partially accurate relative location and relative space, but the actual area of the individual polygons features are overrepresented or underrepresented based on the assigned values. Area cartograms are useful for visualizing relativity based on a common quantitative attribute such as population. Cartograms were popularized by Erwin Raisz who published the first statistical cartograms of the United States. Raisz was a professor of cartography at the Institute of Geographical Exploration at Harvard University and was most well known for his physical relief maps which were hand drawn.

In 1934, Raisz published in the journal Geographical Review an article entitled, “The rectangular statistical cartogram” which popularized the use of cartograms as an educational tool for learning about geography. Visuell, das Blog der Visualisierung. Spring Data – Part 4: Geospatial Queries with MongoDB. Introduction Every location-based service [1] has to solve the following problem: find all venues within a given distance from the current location of the user. 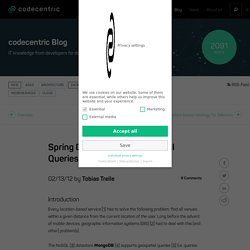 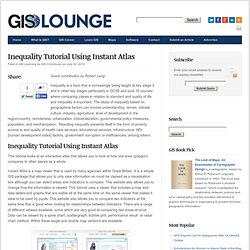 Inequality is a topic that is increasingly being taught at key stage 3 and in other key stages particularly in GCSE and post 16 courses where comparing places in relation to standard and quality of life and inequality is important. The study of inequality based on geographical factors can involve understanding terrain, climate, culture, industry, agriculture, level of development in the region/country, remoteness, urbanization, industrialization, governmental policy measures, population, and mechanization.

Resulting inequality presents itself in the form of poverty, access to and quality of health care services, educational services, infrastructure, HDI [human development index] factors, government corruption or inefficiencies, among others. Inequality Tutorial Using Instant Atlas. Clearly and Simply: Choropleth Maps. A step-by-step guide to Richard Leeke’s TabGeoHack for creating your own filled maps in Tableau Software Way back in 2009, we had a beautiful guest post by Giedre Aleknonyte describing a workaround to generate Choropleth Maps with Tableau (using version 5.0 by the way). 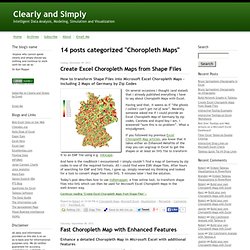 Those days are over. Info.mindjet.com/FromCartographytoCardCatalogsTheHistoryofInformationOrganizationInfographic.html. In today’s information age, we enjoy all but instant digital access to the world’s collected knowledge. 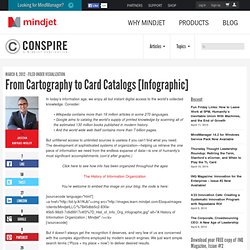 Consider: • Wikipedia contains more than 19 million articles in some 270 languages. • Google aims to catalog the world’s supply of printed knowledge by scanning all of the estimated 130 million books published in modern history.• And the world wide web itself contains more than 7 billion pages. But unfiltered access to unlimited sources is useless if you can’t find what you need. GunnMap 2. Choropleth. Javascript and SVG: Back to the Future. Happy New Year! 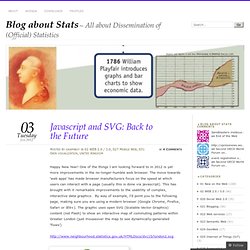 One of the things I am looking forward to in 2012 is yet more improvements in the no-longer-humble web browser. The move towards ‘web apps’ has made browser manufacturers focus on the speed at which users can interact with a page (usually this is done via javascript). Polymaps. Unfolding - Interactive Map Library for Processing and Java. 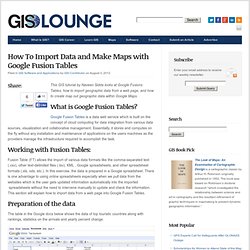 What is Google Fusion Tables? Google Fusion Tables is a data web service which is built on the concept of cloud computing for data integration from various data sources, visualization and collaborative management. Essentially, it stores and computes on the fly without any installation and maintenance of applications on the users machines as the providers manage the infrastructure required to accomplish the task. Working with Fusion Tables: Fusion Table (FT) allows the import of various data formats like the comma-separated text (.csv), other text-delimited files (.tsv), KML , Google spreadsheets, and other spreadsheet formats (.xls, ods, etc.). What's new with JavaScript and geospatial - wrapup from the js.geo event. The past couple of days I've been at the js.geo event in Denver, which was a small informal conference focused on JavaScript and geospatial, organized by Chris Helm, Steve Citron-Pousty and Brian Timoney. 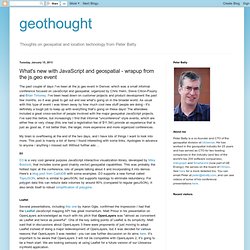 I've been head down on customer projects and product development the past few months, so it was great to get out and see what's going on in the broader world. As usual with this type of event I was blown away by how much cool new stuff people are doing - it's definitely a tough job to keep up with everything that's going on these days! The attendees included a great cross-section of people involved with the major geospatial JavaScript projects. Blog, CartoDB makes D3 maps a breeze. Bill Rankin’s ‘Radical Cartography’ PolyMaps Documentation. Polymaps is a JavaScript library for generating “slippy” maps in the style of Google Maps, Modest Maps, CloudMade and OpenLayers. Most mapping libraries focus on 256×256-pixel image tiles, with only limited support for dynamic overlays such as county boundaries and point clouds. These libraries assume that data needed to produce the desired overlay can be loaded into memory all-at-once, making it difficult to visualize large datasets.

Furthermore, while image tiles automatically adjust in resolution as the map zooms in or out, the overlay resolution remains constant; this greatly limits multi-scale exploration of data, as the resolution must be fixed either for macro- (e.g., state-level) or micro- (e.g., block-level) observation. The goal of Polymaps is to better support rich, large-scale data overlays on interactive maps by extending the tile metaphor to vector graphics: in addition to standard image tiles, Polymaps supports vector tiles that are rendered with SVG.

Vis4.net. SHOW®/WORLD - A New Way To Look At The World. Kartograph – rethink mapping. Tools: ncva.itn.liu.se: Linköping University. GAV Flash Tools The Geovisual Analytics Visualization or GAV component-sharing toolkit and application-building environment is based on the principles behind the Visual Analytics research program including aspects of explorative and collaborative visual data analysis. It contains a collection of visual components, data analysis algorithms, tools that connect the components to each other and data providers that can load data from various sources.

The framework is fully integrated with Adobe’s Flex Framework. The GAV toolkit was developed to build statistical geovisual analytics applications such as the eXplorer GAV Flash uses the Adobe Flash API for graphics and integrates with the Adobe Flex Framework. Geospatial Visualization. Mapping technologies. Svgweb - Scalable Vector Graphics for Web Browsers using Flash. Overview SVG Web is a JavaScript library which provides SVG support on many browsers, including Internet Explorer, Firefox, and Safari. Using the library plus native SVG support you can instantly target ~95% of the existing installed web base. Interactive Infographic of the World's Best Countries. From Cartography to Card Catalogs: The History of Information Organization [Infographic] Why We Need Another Mapping Framework. Migrations Map: Where are migrants coming from? Where have migrants left? Latitude And Longitude. Latitude, Longitude, And Great Circles This page describes how to work with Latitude and Longitude in Excel and how to compute Great Circle Distances.

You can use Excel's trigonometric and time functions to work with Latitude and Longitude values. There are two different ways express geographical coordinates. OpenHeatMap. AmMaps. Sourcemap: where things come from. Three.js: render real world terrain from heightmap using open data.

Three.js is a great library for creating 3D objects and animations. In a couple of previous articles I explored this library a bit and in one of those examples I showed you how you can take GIS information (in geoJSON) format and use D3.js and three.js to convert it to a 3D mesh you can render in the browser using javascript. This is great for infographic, but it doesn't really show a real map, a real terrain. BeGraphic XLS & PPT Add-in. StatPlanet Plus. StatPlanet Plus is an advanced version of the award-winning free StatPlanet mapping and visualization software. Interactive maps & vis. WebGL Globe. WebGL Earth - open source 3D digital globe written in JavaScript. Interactive maps, webmapping, USA map, map of US, map of England, map of France,statistics, atlas : Geoclip. You can view several samples based on Géoclip Server: France Découverte O3, new version of France Découverte, with Géoclip O3.