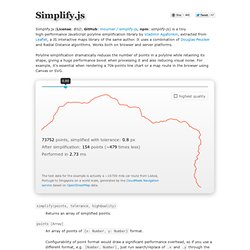 It uses a combination of Douglas-Peucker and Radial Distance algorithms. Works both on browser and server platforms. Polyline simplification dramatically reduces the number of points in a polyline while retaining its shape, giving a huge performance boost when processing it and also reducing visual noise. For example, it's essential when rendering a 70k-points line chart or a map route in the browser using Canvas or SVG. 73752 points, simplified with tolerance: 0.8 px After simplification: 154 points (~479 times less) Performed in 2.73 ms The test data for the example is actually a ~10700 mile car route from Lisboa, Portugal to Singapore on a world scale, generated by the CloudMade Navigation service based on OpenStreetMap data. points [Array]

Map Maker Trust - Africa. FREE ArcView Shapefile Editor. Net - Shp2SVG Converter. ArcView Shapefile to SVG converter (shp2svg, ogis2svg.pl) version 0.5.1 (2007-05-08) This converter can be used under the terms of the LGPL license For many interactive Webmapping applications the data should be converted from a GIS format. 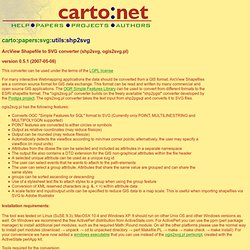 ArcView Shapefiles are a common source format for GIS data exchange. This format can be read and written by many commercial and open source GIS applications. Ogis2svg.pl has the following features: Installation requirements: The tool was tested on Linux (SuSE 9.3), MacOSX 10.4 and Windows XP. Tools required for the conversion: Perl interpreter >=5.8, Windows: ActivePerl Perl module Math::Round (Windows users can use the ogis2svg.exe file instead) shp2pgsql tool from the Postgis project (see binaries below) perl script ogis2svg.pl, Unix and MacOSX users might want to set the x-flag to make it executable (chmod ugo+x ogis2svg.pl) For your convenience you can download the following shp2pgsql binaries.

Conversion process At the command prompt type in: Feedback. MapShaper shapefile editor. Interactive Earth: Shapefile to KML using Open Source GIS. [Note: The work described below has resulted in an application named Shape2Earth, which is now available for download.] 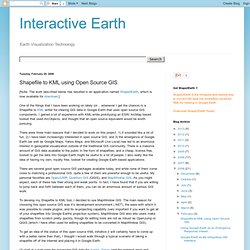 One of the things that I have been working on lately (or .. whenever I get the chance) is a Shapefile to KML writer for viewing GIS data in Google Earth that uses open source GIS components. I gained a lot of experience with KML while prototyping an ESRI ArcMap based toolset that used ArcObjects, and thought that an open source equivalent would be worth pursuing.

There were three main reasons that I decided to work on this project. 1) It sounded like a lot of fun, 2) I have been increasingly interested in open source GIS, and 3) the emergence of Google Earth (as well as Google Maps, Yahoo Maps, and Microsoft Live Local) has led to an enormous interest in geospatial visualization outside of the traditional GIS community. To develop my Shapefile to KML tool, I decided to use MapWindow GIS. Once the parameters have been set, I can convert the data to KML. Geodata converter. About MyGeodata Converter services Vector GIS data converting Raster GIS data converting How-to pages: CAD/GIS/GPS data processing - format converting, coordinate system transformation, etc. 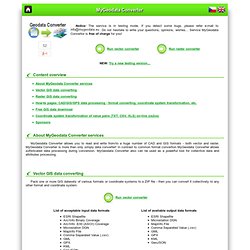 MyGeodata Converter also can be used as a powerful tool for collective data and attributes processing. Pack one or more GIS datesets of various formats or coordinate systems to a ZIP file - then you can convert it collectivety to any other format and coordinate system. List of features and possible operations: List of possible format conversions: Shape - GrADS Extensions for Shapefile support. Shape - GrADS Extensions for Shapefile support shp_polyf SHAPEFILE [OBJECT] shp_lines SHAPEFILE [OBJECT] shp_print SHAPEFILE This library of GrADS extensions provides commands for the display and output of shapefiles. 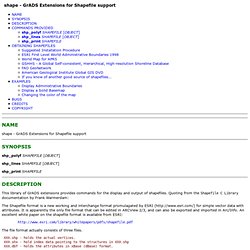 Quoting from the Shapefile C Library documentation by Frank Warmerdam: The Shapefile format is a new working and interchange format promulagated by ESRI ( for simple vector data with attributes. The file format actually consists of three files. XXX.shp - holds the actual vertices. Shp_polyf SHAPEFILE [OBJECT] For each polygon object defined in SHAPEFILE, a filled polygon is plotted as overlay on GrADS plots using the current line attributes.