SPACE HULK 3D - Le blog de tigibus. Tau Hulk! 90% finished Oct 1st - WargamerAU Forums. How many bricks does it take to make a Hulk? - Drop-pod. Well, by my calculations, roughly 4,500 apparently. Or to put it another way:97 0.5" Diamond pattern deck tiles201 1" Bevelled corridor edging sections434 Half cylinder vertical wall modules320 0.5" x 0.5" Lower door track frame80 2" Bulkhead panels64 2" Extruded vertical beam terminals524 1" Recessed wall corner edging150 1.5" x 1.0" Recessed rivetted wall panels374 1.5" x 1.5" Pipe Conduit panels193 1.5" x 1.5" Metal deck plates (diamond pattern) ... And the list goes on to cover 21 other individual components. All of this, as the title eludes to, is to produce a proper three-dimensional 'Space Hulk' board to game on. Now I cannot even remotely claim credit for the idea, or even the design as all the hard work and clever gubbins was done back in 2006 by the guys who produced Project Hulk. 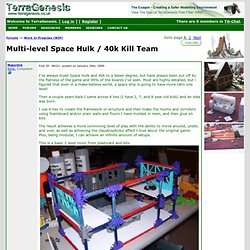 The K'nex pieces do not take paitnt well. I've thought creating standard 'cover' pieces thaat woudl go over the exposed corner connections and exposed rods to make them blend more with the ship idea but have not gotten around to it. Here are a couple more pictures. I'll take some pics tonight of some other concept rooms I've been working on. This shows the basic floor and wall castings with some bits placed on it and some Stealers for scale. Here is another corridor. Some more shots of the 2 level generator room. The main reason I came up with this was for true 3D play. You could also use the same concept for Necromunda, as well as sewers or other multi-level underground play. I've also considered doing the basic floors and walls out of laser cut wood which would save weight. Hirst Arts Space Hulk Board - WarSeer. 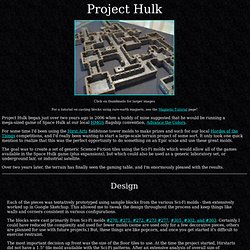 Project Hulk began just over two years ago in 2006 when a buddy of mine suggested that he would be running a mega-sized game of Space Hulk at our local HMGS flagship convention, Advance the Colors. For some time I'd been using the Hirst Arts fieldstone tower molds to make prizes and such for our local Hordes of the Things competitions, and I'd really been wanting to start a large-scale terrain project of some sort. It only took one quick mention to realize that this was the perfect opportunity to do something on an Epic scale and use these great molds. The goal was to create a set of generic Science-Fiction tiles using the Sci-Fi molds which would allow all of the games available in the Space Hulk game (plus expansions), but which could also be used as a generic laboratory set, or underground lair, or industrial satellite. Space Hulk bases - The Fortress Monastery. Here is a group shot of my Deathwing with the teleport homer. 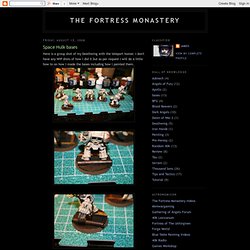 I don't have any WIP shots of how I did it but as per request I will do a little how to on how I made the bases including how I painted them. I got my idea from Games Workshop's Space Hulk terrain article. But when I looked around I did not have any crochet sheets around unless I went out and bought them. I did however find window and door screening and I went with that. I went with plastic screening but i would imagine the metal would work also if not be a little more stubborn to work with. using a very light spread of PVA glue I glued the bases to the sheet and then after letting it dry I cut and clipped the screen around the bases until it was essentially flush with the side of the base. For painting I have the entire thing a base coat of black. I washed Devlan mud over the aged rusted areas sloppily so it went over onto non aged areas.

Space Hulk Project. Modhail’s Space Hulk Project. Colonial Space Base (Lead Adventure Forum) Well... After being inspired by DeathWing's Foamcore Mansion of Madness I decided to have another shot at building a Colonial Outpost/Space Base/Space Ship. My concept has always been to build the structure inside boxes (easy storage) and I have tried a couple times now and failed. My earlier attempts used plastic card and bits which I attempted to put together and make a modular system which could be used for a variety of games of the "Space Hulk" type, but more oriented towards stuff like the Alien or Doom movies. Thanks to DeathWing, I checked out and bought World Works Games "First Light" .pdf, which though it is a space ship I figured I could modify to meet my goal.

So far, I am still working on the first "module," but I thought folks may find some interest in seeing my progress, so I decided to post some pic's along the way. My first module will be crews quarters and a galley. Here is a picture showing the startup and basic materials: Sci Fi Scenery - Librarium Online.