Easy to Read Drug Facts. When a drug user can't stop taking a drug even if he wants to, it's called addiction. 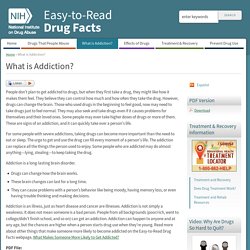 The urge is too strong to control, even if you know the drug is causing harm. When people start taking drugs, they don't plan to get addicted. About Al-Anon Family Group Meetings. At Al‑Anon Family Group meetings, the friends and family members of problem drinkers share their experiences and learn how to apply the principles of the Al‑Anon program to their individual situations. 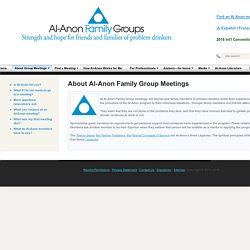 Younger family members and friends attend Alateen meetings. They learn that they are not alone in the problems they face, and that they have choices that lead to greater peace of mind, whether the drinker continues to drink or not. Sponsorship gives members an opportunity to get personal support from someone more experienced in the program. These relationships are voluntary. Members ask another member to be their Sponsor when they believe that person will be suitable as a mentor in applying the program. Alternative Options to Prison. Of the myriad of reasons why people enter into the criminal justice system, illicit drug use is one of the most serious. 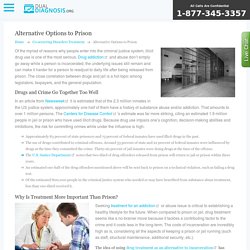 Drug addiction and abuse don’t simply go away while a person is incarcerated; the underlying issues still remain and can make it harder for a person to readjust to daily life after being released from prison. The close correlation between drugs and jail is a hot topic among legislators, taxpayers, and the general population. Drugs and Crime Go Together Too Well In an article from Newsweek it is estimated that of the 2.3 million inmates in the US justice system, approximately one-half of them have a history of substance abuse and/or addiction.

That amounts to over 1 million persons. How Illicit Drug Use Affects Business and the Economy. The Federal Government and business community are increasingly recognizing the negative consequences of substance abuse on the U.S. economy and the Nation’s workforce. 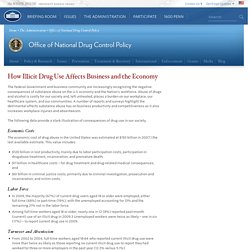 Abuse of drugs and alcohol is costly for our society and, left untreated, places a burden on our workplace, our healthcare system, and our communities. A number of reports and surveys highlight the detrimental effects substance abuse has on business productivity and competitiveness as it also increases workplace injuries and absenteeism. The following data provide a stark illustration of consequences of drug use in our society. Economic Costs The economic cost of drug abuse in the United States was estimated at $193 billion in 2007,1 the last available estimate. Labor Force In 2009, the majority (67%) of current drug users aged 18 or older were employed, either full‐time (48%) or part‐time (19%), with the unemployed accounting for 13% and the remaining 21% not in the labor force. Turnover and Absenteeism School Performance. Buprenorphine vs. Methadone – Addiction Treatment Forum. Buprenorphine and methadone, both being opioids, activate the opioid (mu) receptors on nerve cells. 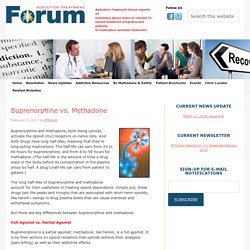 And both drugs have long half-lifes, meaning that they’re long-acting medications. The half-life can vary from 24 to 60 hours for buprenorphine, and from 8 to 59 hours for methadone. (The half-life is the amount of time a drug stays in the body before its concentration in the plasma drops by half. A drug’s half-life can vary from patient to patient.) The long half-lifes of buprenorphine and methadone account for their usefulness in treating opioid dependence. But there are key differences between buprenorphine and methadone. Historical Data: The Birth of A.A. and Its Growth in the U.S./Canada. A.A. had its beginnings in 1935 at Akron, Ohio, as the outcome of a meeting between Bill W., a New York stockbroker, and Dr. 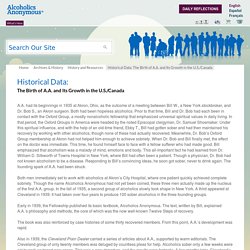 Bob S., an Akron surgeon. Both had been hopeless alcoholics. Prior to that time, Bill and Dr. Bob had each been in contact with the Oxford Group, a mostly nonalcoholic fellowship that emphasized universal spiritual values in daily living. In that period, the Oxford Groups in America were headed by the noted Episcopal clergyman, Dr. Both men immediately set to work with alcoholics at Akron’s City Hospital, where one patient quickly achieved complete sobriety. New Data Show Millions of Americans with Alcohol and Drug Addiction Could Benefit from Health Care R. WASHINGTON, D.C. — New government data demonstrate the continued, urgent need for more Americans to have access to drug and alcohol addiction treatment, according to an analysis by the Closing the Addiction Treatment Gap (CATG) initiative. 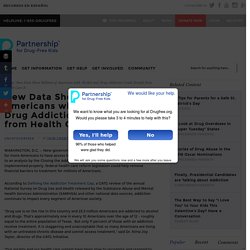 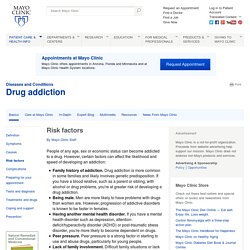 However, certain factors can affect the likelihood and speed of developing an addiction: Family history of addiction. Drug addiction is more common in some families and likely involves genetic predisposition. Bill would get drug addicts treatment instead of jail. ANNAPOLIS, Md. 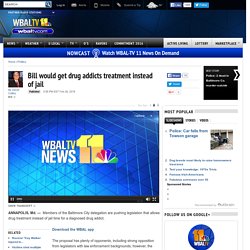 —Members of the Baltimore City delegation are pushing legislation that allows drug treatment instead of jail time for a diagnosed drug addict. Download the WBAL app The proposal has plenty of opponents, including strong opposition from legislators with law enforcement backgrounds; however, the measure has bipartisan support. The measure creates a specific felony crime for robbing, stealing or breaking into places, such as a pharmacy, to get drugs. Violators face a 20-year prison sentence and $10,000 fine. But if a drug assessment done by the state Department of Health and Mental Hygiene determines the accused is an addict, then criminal penalties do not apply and the person must enter a drug-treatment program.

"What we want to do is try to create a situation where people don't use drugs, don't have to break into pharmacies. Critics contend there are consequences. "We are setting a bad precedent here. "What's next? National Institute on Drug Abuse (NIDA) Brief Description There are a variety of sources of information NIDA uses to monitor the prevalence and trends regarding drug abuse in the United States. 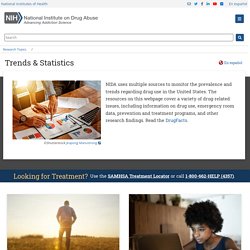 The resources below cover a variety of drug related issues, including information on drug usage, emergency room data, prevention and treatment programs, and other research findings. Costs of Substance Abuse Abuse of tobacco, alcohol, and illicit drugs is costly to our Nation, exacting more than $700 billion annually in costs related to crime, lost work productivity and health care.