4 Big-Picture Lessons In Innovation From Steven Johnson And "How We Got To Now" Innovation is one of the buzzwords of the century. 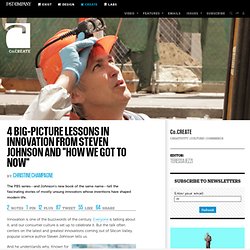 Everyone is talking about it, and our consumer culture is set up to celebrate it. But the talk often centers on the latest and greatest innovations coming out of Silicon Valley, popular science author Steven Johnson tells us. And he understands why. Known for bestselling books including Where Good Ideas Come From: The Natural History of Innovation and The Invention of Air, Johnson freely admits that he is just as obsessed with the latest high-tech gadgets--the Apple Watch in particular at the moment--as so many other people are. The 12 Trends That Will Rule Products In 2013.

Near the end of 2012, a group of us at Ziba got together to review what we’d learned over the course of the year. 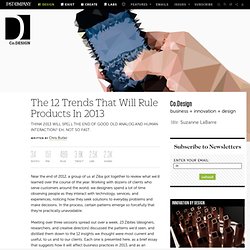 Working with dozens of clients who serve customers around the world, we designers spend a lot of time observing people as they interact with technology, services, and experiences, noticing how they seek solutions to everyday problems and make decisions. In the process, certain patterns emerge so forcefully that they’re practically unavoidable. 10 Breakthrough Capitalism Opportunities For 2013. Over the course of this series, we have outlined a case for Breakthrough Capitalism. 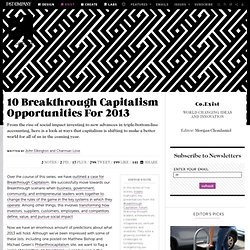 We successfully move towards our Breakthrough scenario when business, government, community, and entrepreneurial leaders work together to change the rules of the game in the key systems in which they operate. Among other things, this involves transforming how investors, suppliers, customers, employees, and competitors define, value, and pursue social impact. Now we have an enormous amount of predictions about what 2013 will hold.

Although we’ve been impressed with some of these lists, including one posted on Matthew Bishop and Michael Green’s Philanthrocapitalism site, we want to flag a series of breakthrough trajectories we see brewing in the market. Working with a range of partners, we aim to build the momentum in these areas through 2013 and beyond. From corporate venture capital to setting breakthrough goals, here are 10 areas where the trajectories for change are starting to take shape: Collaboration. Maura O'Neill: Disruptive Innovation Often Comes From Unexpected Places. Click here to read an original op-ed from the TED speaker who inspired this post and watch the TEDTalk below. 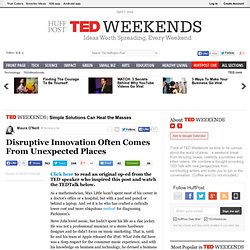 As a mathematician, Max Little hasn't spent most of his career in a doctor's office or a hospital, but with a pad and pencil or behind a laptop. And yet it is he who has crafted a radically lower cost and more ubiquitous method for diagnosing Parkinson's. Steve Jobs loved music, but hadn't spent his life as a disc jockey. He was not a professional musician or a stereo hardware designer and he didn't focus on music marketing. That is, until he and his team at Apple released the iPod. Two doctors in Western Australia, far from the center of the world's cutting edge medical research, discovered that most ulcers were caused by bacteria -- not stress or acid as previously assumed -- and that they could easily and quickly be treated. This isn't a coincidence. How Can Companies Be More Innovative? [Need To Know] Originally published in PSFK’s Need To Know Magazine Volume 1. 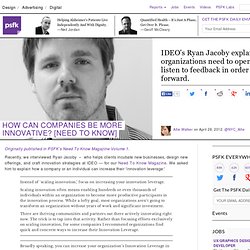 Recently, we interviewed Ryan Jacoby – who helps clients incubate new businesses, design new offerings, and craft innovation strategies at IDEO — for our Need To Know Magazine. We asked him to explain how a company or an individual can increase their ‘innovation leverage:’ Instead of ‘scaling innovation,’ focus on increasing your innovation leverage.Scaling innovation often means enabling hundreds or even thousands of individuals within an organization to become more productive participants in the innovation process. While a lofty goal, most organizations aren’t going to transform an organization without years of work and significant investment.There are thriving communities and partners out there actively innovating right now.

The trick is to tap into that activity. How To Foster Innovative Thinking And Creativity [Need to Know] Originally published in PSFK’s Need To Know Magazine Volume 1. 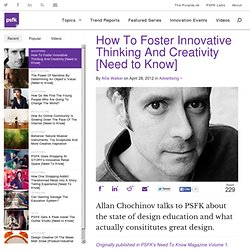 Allan Chochinov is the Chair and co-founder of the MFA in Products of Design Program at the School of Visual Arts, a new two-year, immersive program which prepares practitioners for leadership in the shifting terrain of design. Allan also writes widely on design education and the impact of design on contemporary culture. He talks to PSFK about the state of design education and how creativity works. How do we foster innovative thinking and creativity? I think it can be instructive to decouple the idea of innovation with the sole goal of creating new goods and services.

Is the Products of Design program at SVA a response to the fluid landscape designers find themselves in these days? How to Spot the Future. Photo: Brock Davis Thirty years ago, when John Naisbitt was writing Megatrends, his prescient vision of America’s future, he used a simple yet powerful tool to spot new ideas that were bubbling in the zeitgeist: the newspaper. 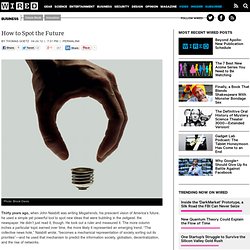 He didn’t just read it, though. How The Occupy Movement Inspired A Different Approach To Human Storytelling [Video]