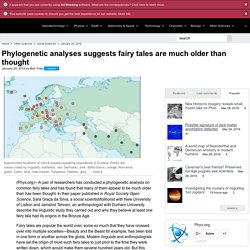 In their paper published in Royal Society Open Science, Sara Graça da Silva, a social scientist/folklorist with New University of Lisbon and Jamshid Tehrani, an anthropologist with Durham University describe the linguistic study they carried out and why they believe at least one fairy tale had its origins in the Bronze Age. Fairy tales are popular the world over, some so much that they have crossed over into multiple societies—Beauty and the Beast for example, has been told in one form or another across the globe. Γραμματική. Γραμματική. The Most Amazing, Beautiful and Viral Maps of the Year. Map Stack by Stamen. Andrew O’Hagan reviews ‘Fifty Shades of Grey’ by E.L. James · LRB 19 July 2012. When it comes to erotic writing, the more explicit it gets – the more heaving, the more panting – the more I want to laugh. 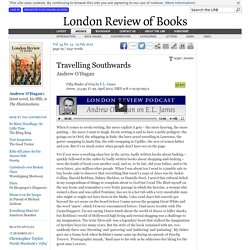 Erotic writing is said to have a noble pedigree: the goings-on in Ovid, the whipping in Sade, the bare-arsed wrestling in Lawrence, the garter-snapping in Anaïs Nin, the wife-swapping in Updike, the arcs of semen hither and yon. But it’s so much sexier when people don’t have sex on the page. Yet if you were a working-class boy in the 1970s, badly written books about fucking – quickly followed in the 1980s by badly written books about shopping-and-fucking – were the kinds of book your mother read, and so, to be fair, did your father, and to be even fairer, 400 million other people. E-flux journal 56th Venice Biennale – SUPERCOMMUNITY – Uncommoning Nature.

On June 5, 2009, at dawn, a violent confrontation took place between police forces and a large group of Peruvian citizens declaring themselves as belonging to the Awajun-Wampis indigenous groups. 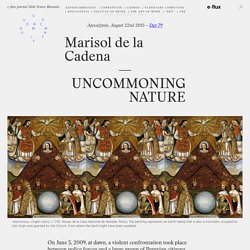 The police’s objective was to break up a blockade at a major highway near the town of Bagua in the Amazonian lowlands of northern Peru. The Awajun-Wampis had taken control of the highway at a place called La Curva del Diablo (Devil’s Curve) as part of a general strike that started on April 9 that same year, organized by several Amazonian indigenous groups. They were protesting a series of legislative decrees conceding their territory to oil exploration without abiding by the Indigenous and Tribal Peoples (ILO) Convention No. 169, which requires that governments consult inhabitants of territories that corporations may approach for exploration and exploitation. 15 Badass Art World Heroines Over 70 Years Old. They came. 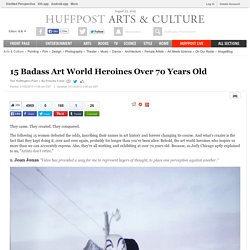 They created. They conquered. The following 15 women defeated the odds, inscribing their names in art history and forever changing its course. And what's crazier is the fact that they kept doing it, over and over again, probably for longer than you've been alive. Behold, the art world heroines who inspire us more than we can accurately express. 1. Joan Jonas, dOCUMENTA 13, photo credit Maria Ruhling. Why the Past Always Seems Happier Than the Present  When you sit around with family, the discussion invariably turns to the past. 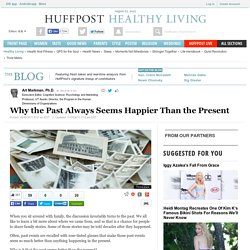 We all like to learn a bit more about where we came from, and so that is a chance for people to share family stories. Some of those stories may be told decades after they happened. Loan of a Parthenon sculpture to the Hermitage: a marble ambassador of a European ideal. Neil MacGregor, Director, British Museum The State Hermitage Museum, St Petersburg The British Museum is a museum of the world, for the world and nothing demonstrates this more than the loan of a Parthenon sculpture to the State Hermitage Museum in St Petersburg to celebrate its 250th anniversary. 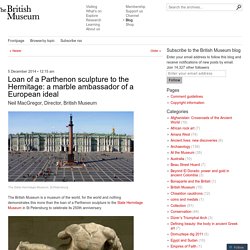 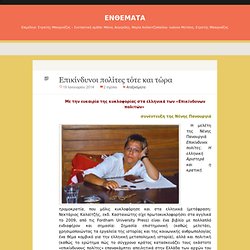 20 Wonderful Online Museums and Sites for Virtual Field Trips to Use in Class. January 27, 2014 Yesterday when I was working on the list of iPad apps that teachers can use with their students to make virtual field trips, it dawned on me to compile another list of web based platforms for both online museums and virtual field sites that can be used with students in class. 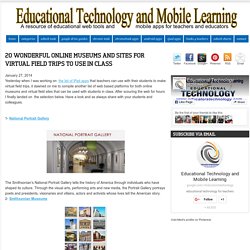 After scouring the web for hours I finally landed on the selection below. Have a look and as always share with your students and colleagues. 1- National Portrait Gallery The Smithsonian’s National Portrait Gallery tells the history of America through individuals who have shaped its culture. Through the visual arts, performing arts and new media, the Portrait Gallery portrays poets and presidents, visionaries and villains, actors and activists whose lives tell the American story. 2- Smithsonian Museums. Home. Viviane Sassen. Shanna Merola.