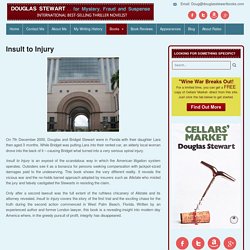 While Bridget was putting Lara into their rented car, an elderly local woman drove into the back of it – causing Bridget what turned into a very serious spinal injury. Insult to Injury is an exposé of the scandalous way in which the American litigation system operates. Outsiders see it as a bonanza for persons seeking compensation with jackpot-sized damages paid to the undeserving. This book shows the very different reality. It reveals the vicious war and the no-holds barred approach adopted by insurers such as Allstate who misled the jury and falsely castigated the Stewarts in resisting the claim. Only after a second lawsuit was the full extent of the ruthless chicanery of Allstate and its attorney revealed. A Family at Law by Douglas Stewart. This legal advice book helps accident victims to understand how the English compensation system works – and in doing so follows the hapless Henderson family in a hilarious fashion. 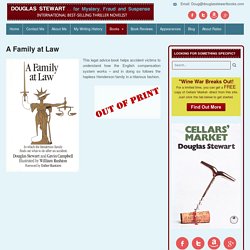 Blog - Douglas Stewart - Official Site. Douglas Stewart Writing History. Having had the idea of becoming an author fired by a visit to Cranbrook School by Hammond Innes, a household name and an Old Cranbrookian, it was over ten years before I started my first novel. 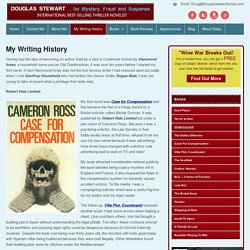 In fact Hammond Innes was not the first famous writer I had chanced upon but sadly when I met Geoffrey Household who had written the classic thriller Rogue Male, I was too young to take on board what a privilege that really was. Robert Hale Limited My first novel was Case for Compensation and this became the first of a trilogy based on a Bristol solicitor called Alistair Duncan. It was published by Robert Hale Limited but under a pen-name of Cameron Ross. Because I was a practising solicitor, the Law Society in their fuddy-duddy ways at that time, refused to let me use my own name because it was advertising.

The follow-up, Villa Plot, Counterplot exposed another scam I had come across when helping a client. The third Alistair Duncan book was The Scaffold. Moving On. Top Drama Book by Douglas Stewart. Terror at Sea – 289 pages (paperback) Terror at Sea brings to real life all the terror of an attack by pirates armed with rocket-launchers and automatic machine-guns. 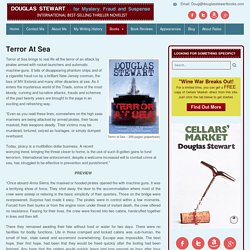 It tells of disappearing phantom ships and of a cigarette fraud run by a brilliant New Jersey conman, the loss of MV Estonia and many other disasters at sea. As it enters the mysterious world of the Triads, some of the most bloody, cunning and lucrative attacks, frauds and schemes of the past twenty years are brought to the page in an exciting and refreshing way. “Even as you read these lines, somewhere on the high seas mariners are being attacked by armed pirates, their faces masked, their weapons deadly. Their victims may be murdered, tortured, seized as hostages, or simply dumped overboard. Today, piracy is a multibillion dollar business. “Once aboard Anna Sierra, the masked or hooded pirates opened fire with machine guns.

Buy Popular Books By Douglas Stewart. Best Books on Amazon 2014. Winning at Roulette is a percentage game and this book explains in plain language just how and why it is so easy to win or lose. 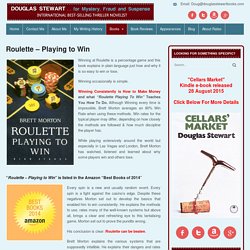 Winning occasionally is simple. Winning Consistently is How to Make Money and what “Roulette Playing To Win” Teaches You How To Do. Although Winning every time is impossible, Brett Morton averages an 80% Win Rate when using these methods. Win rates for the typical player may differ, depending on how closely the methods are followed & how much discipline the player has. While playing extensively around the world but especially in Las Vegas and London, Brett Morton has watched, listened and learned about why some players win and others lose.

“Roulette – Playing to Win” is listed in the Amazon “Best Books of 2014″ Every spin is a new and usually random event. His conclusion is clear: Roulette can be beaten. Brett Morton explains the various systems that are supposedly infallible. “By far, the best book i have EVER read! – Louis Raven – Dean Hyman, amazon.com “Listen! Recommended & Best Selling Books.