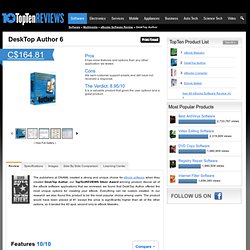 Above all of the eBook software applications that we reviewed, we found that DeskTop Author offered the most unique options for creating your eBook. Everything can be custom created. In our research we also found this product to be the most popular choice among users. The product would have been placed at #1 except the price is significantly higher than all of the other options, so it landed the #2 spot, second only to eBook Maestro. Features Compare eBook Maestro DeskTop Author eBooks Compiler Ebook Maker In addition to the common features users will find in other eBook software applications, DeskTop Author provides a unique array of tools and functions. Compiling Capabilities The application allows users to add content into their book on the spot. Ease of Use Help & Support DeskTop Author Summary: Tutorials.

Interactive eBook Apps: The Reinvention of Reading and Interactivity. The invention of the tablet PC has created a new medium for book publishing. 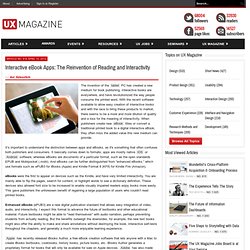 Interactive books are everywhere, and have revolutionized the way people consume the printed word. With the recent software available to allow easy creation of interactive books and with the race to bring these products to market, there seems to be a more and more dilution of quality and a loss for the meaning of interactivity. When publishers create new eBook titles or convert a traditional printed book to a digital interactive eBook, they often miss the added value this new medium can provide.

It’s important to understand the distinction between apps and eBooks, as it's something that often confuses both publishers and consumers. It basically comes down to formats; apps are mostly native iOS or Android software, whereas eBooks are documents of a particular format, such as the open standards EPUB and Mobipocket (.mobi). This video was released by Apple to promote the iBooks Author: How to Build an iPhone App From Scratch (For Non-Technical People) Updated on March 10, 2014 In the beginning, apples grew on trees. 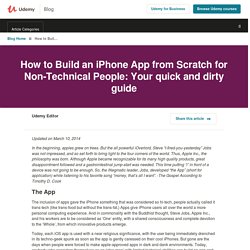 But the all powerful iOverlord, Steve “I-fired-you-yesterday” Jobs was not impressed, and so set forth to bring light to the four corners of the world. Thus, Apple Inc., the philosophy was born. Although Apple became recognizable for its many high quality products, great disappointment followed and a gastrointestinal jump-start was needed. This time putting “i” in front of a device was not going to be enough. The App The inclusion of apps gave the iPhone something that was considered so hi-tech, people actually called it trans-tech (like trans-food but without the trans-fat.)

Today, each iOS app is used with a near religious significance, with the user being immediately drenched in its techno-geek spunk as soon as the app is gently caressed on their cool iPhones. What’s Your Angle? First off, you need to have an angle. How To Make Your Own Apps. Before ever suiting up, all fire-engine operators are taught about friction loss, in which water pressure is reduced by friction inside a fire hose. 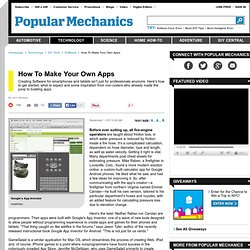 It's a complicated calculation, dependent on hose diameter, type and length, as well as water velocity. Getting it right is vital. Many departments post cheat sheets for estimating pressure. Mike Raben, a firefighter in Louisville, Colo., found a more modern solution online: a custom-built calculator app for Google Android phones. He liked what he saw, and had a few ideas for improving it. Here's the twist: Neither Raben nor Carolan are programmers. GameSalad is a similar application for Mac OS, which streamlines the process of creating Web, iPad and, of course, iPhone games to a point where nonprogrammers have found success in the notoriously crowded App Store. How It Works What App Inventor and GameSalad do is automate the creation of code, hiding it from view.

GameSalad's jarringly stripped-down appearance belies its capabilities. Make your own iPhone App. How To Create Your First iPhone App (2012 Edition) Update: 01/10/2012: The original version of this article by Jen Gordon was published in August 2009. 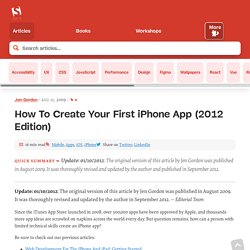 It was thoroughly revised and updated by the author in September 2012. — Editorial Team Since the iTunes App Store launched in 2008, over 500,000 apps have been approved by Apple, and thousands more app ideas are scrawled on napkins across the world every day. But question remains, how can a person with limited technical skills create an iPhone app? The good news is anyone can make an iPhone app, it’s just a matter of knowing the series of actions you need to take to make it happen.

Be sure to bookmark this article because it will serve as a guide for learning the process for creating your first iPhone app, going step by step from idea to the App Store. What Is Your Goal? The first thing to look at when embarking on any product development or entrepreneurial venture is your goals for the project. Let’s look at an example. Here are some examples of project goals: What Are Your Expectations?