Noahpinion: Does QE cause deflation? Oh my gosh. 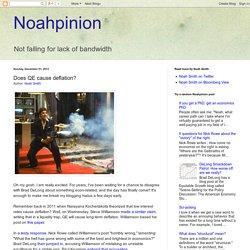 Should TARGET balances be restricted? By now most readers of European financial newspapers and blogs will have come across Hans-Werner Sinn’s repeated assertions (see Sinn 2011a and 2011b on this site and his latest here) about Germany’s “stealth bailout” of European peripheral economies and the “ticking time bomb” hidden in the €300 billion claims of the Bundesbank in the Eurozone payment system TARGET2. 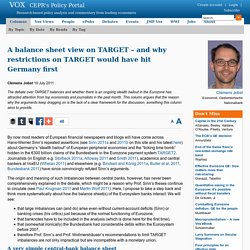 Journalists (in English e.g. The Renminbi: Soon to Be a Reserve Currency? I get the question all the time: when will the Chinese renminbi (RMB) replace the US dollar as the major world reserve currency? 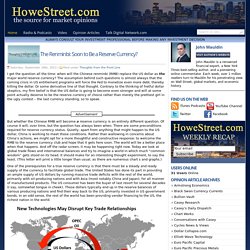 The assumption behind such questions is almost always that the coming crisis in US entitlement programs will force the Fed to monetize even more debt, thereby killing the dollar. Or some derivative line of that thought. Contrary to the thinking of fretful dollar skeptics, my firm belief is that the US dollar is going to become even stronger and will at some point actually deserve to be the reserve currency of choice rather than merely the prettiest girl in the ugly contest – the last currency standing, so to speak. Advertisement But whether the Chinese RMB will become a reserve currency is an entirely different question. Central bank transparency: a delicate balancing act. “I enclose a document describing some of MI6s operations against member states of the European Union,” reads a letter addressed to the Intelligence Services Select Committee in 1998 and written by the ex-MI6 employee Richard Tomlinson. 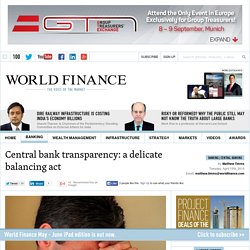 Since his dismissal from the British Secret Services in 1995, the New Zealand-born, Cambridge University-educated individual has been hounded and even imprisoned by his former employer on account of spilling state secrets and making supposedly spurious accusations against the agency. As a consequence, the former spy today ranks among the world’s most audacious whistle-blowers, and while his accusations fall short of Bradley Manning and Edward Snowden in terms of scale, the ramifications have been similarly impressive. Intelligence as an economic tool“I would like to draw your attention to MI6s operations against fellow member states of the European Union,” wrote Tomlinson in one of his many statements made against his former employer. 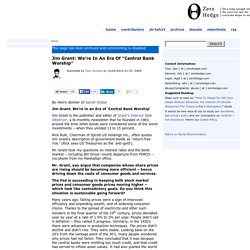 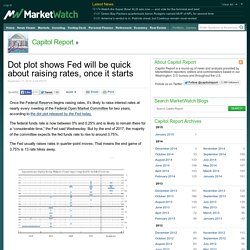 The federal funds rate is now between 0% and 0.25% and is likely to remain there for a “considerable time,” the Fed said Wednesday. But by the end of 2017, the majority of the committee expects the fed funds rate to rise to around 3.75%. The Fed usually raises rates in quarter-point moves. That means the end game of 3.75% is 13 rate hikes away. The dot plot from the Federal Reserve. The dot plot suggests that the Fed may raise rates four times in 2015, from 0.25% to 1.25%. Bundesbank weighs bullion against public pressure - FT.com. Web: ECB purchases. The G7/20 Spent Trillions On Its Latest Global Bailout And All I Got Was Th. Wonkmonk sur Twitter : "Monetary base growth since January 2008: United States vs. Japan. BoE’s Andy Haldane favours a delay in interest rate rises. Norway goes macroprudential. ‎www.interdependence.org/wp-content/uploads/2013/01/Helicopter_Money_Final1. Multiple Giralgeldschöpfung. Als multiple Giralgeldschöpfung wird in einer Geldwirtschaft die Möglichkeit zur Ausweitung der den Wirtschaftssubjekten zur Verfügung stehenden Geldmenge durch Kreditvergabe bezeichnet. 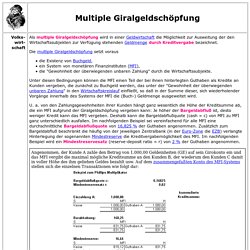 Die multiple Giralgeldschöpfung setzt voraus. ECB: Key interest rates. Prior to 10 March 2004, changes to the interest rate for main refinancing operations were, as a rule, effective as of the first operation following the date indicated, unless stated otherwise. ( 1 ) On 22 December 1998 the ECB announced that, as an exceptional measure between 4 and 21 January 1999, a narrow corridor of 50 basis points would be applied between the interest rates for the marginal lending facility and the deposit facility, aimed at facilitating the transition to the new regime by market participants. ( 2 ) On 8 June 2000 the ECB announced that, starting from the operation to be settled on 28 June 2000, the main refinancing operations of the Eurosystem would be conducted as variable rate tenders. 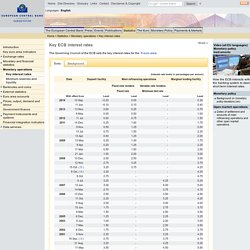 Horst Seiffert - Kontakt / Impressum. Deutsche Bundesbank - Geschäftsberichte. ‎www.bundesbank.de/Redaktion/DE/Downloads/Veroeffentlichungen/Geschaeftsber. Why Are Banks Holding So Many Excess Reserves? - sr380.pdf. If the Bank of England is going to do more QE, it should get ultra adventur. The Bank of England. 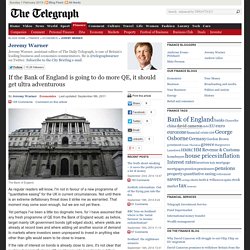 As regular readers will know, I'm not in favour of a new programme of "quantitative easing" for the UK in current circumstances. Not until there is an extreme deflationary threat does it strike me as warranted. That moment may come soon enough, but we are not yet there. Yet perhaps I've been a little too dogmatic here, for I have assumed that any fresh programme of QE from the Bank of England would, as before, target mainly UK government bonds (gilt edged stock), where yields are already at record lows and where adding yet another source of demand to markets where investors seem unprepared to invest in anything else other than gilts would seem to be close to insane.

If the rate of interest on bonds is already close to zero, it's not clear that pushing it marginally lower still would persuade investors to put their money in higher risk assets. Bank of England Quarterly Bulletin 2014 Q1 - qb14q1prereleasemoneycreation. Deutsche Bundesbank - Makroökonomische Zeitreihen Detailansicht Werte. China’s central bank, the People’s Bank of China, has the largest stash of foreign reserves of any in the world. 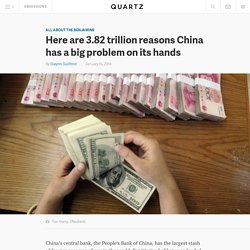 Weiterhin soll gezeigt werden, dass zur Refinanzierung auch der Bedarf an Zentralbankgeld nicht in Höhe des neuen Kredites notwendig ist, sondern nur insoweit er zur Erfüllung der Mindestreserveanforderungen dient. Amerikas Geldpolitik: Das entwertete Inflationsziel - Wirtschaft - FAZ. Options for Europe – Part 68. The title is my current working title for a book I am finalising over the next few months on the Eurozone. If all goes well (and it should) it will be published in both Italian and English by very well-known publishers. The publication date for the Italian edition is tentatively late April to early May 2014. Courtesy of the recently declassified Fed discount window documents, we now know that the biggest beneficiaries of the Fed's generosity during the peak of the credit crisis were foreign banks, among which Belgium's Dexia was the most troubled, and thus most lent to, bank.

Having been thus exposed, many speculated that going forward the US central bank would primarily focus its "rescue" efforts on US banks, not US-based (or local branches) of foreign (read European) banks: after all that's what the ECB is for, while the Fed's role is to stimulate US employment and to keep US inflation modest. And furthermore, should the ECB need to bail out its banks, it could simply do what the Fed does, and monetize debt, thus boosting its assets, while concurrently expanding its excess reserves thus generating fungible capital which would go to European banks. Wrong. For those who can't wait for the punchline, here it is. So how did cash held by US banks fare during QE2? SweepMeasures.com. In a sweep program, banks move a portion of funds from customer demand deposits or other checkable deposits into instruments with zero statutory reserve requirements.

Under retail sweep programs, which began in January 1994, banks move funds from demand deposits or other checkable deposits into money market deposit accounts as part of savings accounts. Customers have unrestricted checking privileges on both swept and unswept funds; in fact, the sweeping process is generally invisible to the customers. Under commercial demand deposit sweep programs, banks establish investment accounts with their customers that are linked to their demand deposits. Banks maintain a predetermined target balance in demand deposits by sweeping funds to or from the linked investment account as needed. Though commercial demand deposit sweep programs have existed since the 1970s, funds in these sweep accounts have increased sharply since the mid-1990s. More On Wages And Monetary Policy - NYTimes.com. Xxx - flushdoc.aspx. 365x Fürchte dich nicht: Wie es dazu kam - 365x Fürchte Dich Nicht - Einlei.

How Important Is Alexa Ranking? All businesses that have taken up online marketing, aim at improving their conversion rate. Now, there are different ways of attracting targeted traffic. Some go for a good place in the SERPs, others like to know that their site receives heavy traffic. Either way, everybody has this goal of achieving financial success. But, while scoring high with Google may seem to certain business people the only way to make themselves known and thus reaching their goal, there are others that think that a good place in the Alexa ranking system might benefit them just as well.

In the introductory chapter we said: Trade balances reflect the ability of local private and public companies to make higher profits compared to the international competition. While local goods are paid with foreign currency, the latter shows a higher supply and must depreciate. The ECB should further ease monetary policy. Inflation at 0.8% across the Eurozone is below the target of ‘close to 2%’, and unemployment in most countries is still high. How It Fits Together——QE, Deflation And Malinvestment. Monetary and Fiscal Policy and its Most Relevant Pages -SNBCHF.COM. Basel III And Gold - Seeking Alpha. Die Weltwoche & Weltwoche Stil. Fehler 404 | Sonntag, 1. Februar 2015. The Grexit Proposal - Positive Money. FOMC Voters 2012 Dove Hawk Scale. FOMC Voters 2014 Dove Hawk Scale. Revenge of the Fed hawks – sort of. Fed Dove-Hawk Scale. Bernanke's Cheat Sheet: SocGen Lays Out The Probability Matrix Of The Fed's. Monetary Policy and the Lost Decade: Lessons from Japan; by Daniel Leigh; I.

Private Savings Finance Public Deficit and Current Account Surplus. Screenshot by Lightshot. QE Timeline Update. A Few Comments on QE. RBNZ: Currency intervention: Where and When? Quantitative Easing for the People by John Muellbauer. George Dorgan sur Twitter : "@TIMGOLDFINCH Sure over the long-term wages prevail @acemaxx... The ECB should do QE via forex intervention. Home Page International Movement for Monetary Reform. As It Turns Out Deflation Is Good After All. How It Fits Together——QE, Deflation And Malinvestment. Monetary and Fiscal Policy and its Most Relevant Pages -SNBCHF.COM. Monetary and Fiscal Policy and its Most Relevant Pages -SNBCHF.COM. Differences between SNB, ECB and Fed Money Printing Explained. The Natural Rate of Interest/ Taylor Rate -SNBCHF.COM. Monetarist theories -SNBCHF.COM. Cleveland Fed: Price inflation is a monetary phenomenon #Monetary & #Fiscal #Policy. Quantitative Easing, its Indicators and the Swiss Franc, Update FOMC September 2013.