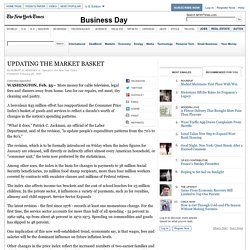 Less for car repairs, red meat, dry cleaning and pastry. A herculean $45 million effort has reapportioned the Consumer Price Index's basket of goods and services to reflect a decade's worth of changes in the nation's spending patterns. Don't worry, inflation will come back! The 11 drivers of disinflation. We name the main drivers of disinflation and the downwards manipulators of the CPI: Markets, central banks, investors, governments, statisticians, ageing, entrepreneurs, global competition, technology and last but least the euro.But manipulation is only temporary. 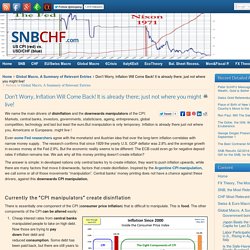 Inflation is already there just not where you, Americans or Europeans, might live ! Even some Fed researchers agree with the monetarist and Austrian idea that over the long-term inflation correlates with narrow money supply. The research confirms that since 1929 the yearly U.S. GDP deflator was 2.8% and the average growth in excess money at the Fed 2.9%. But the economic reality seems to be different: The ECB could even go for negative deposit rates if inflation remains low. Belarus Hyperinflation Update: Food Runs Out As Friendly Foreigners Take Ad. Origins of the Great Inflation - Meltzer.pdf. No Need for QE3: Fed-Speak Enough to Keep Rates Low, Says Axel Merk. St. 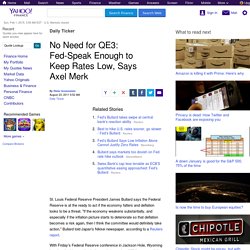 Louis Federal Reserve President James Bullard says the Federal Reserve is at the ready to act if the economy falters and deflation looks to be a threat. "If the economy weakens substantially, and especially if the inflation picture starts to deteriorate so that deflation becomes a risk again, then I think the committee would definitely take action," Bullard told Japan's Nikkei newspaper, according to a Reuters report. With Friday's Federal Reserve conference in Jackson Hole, Wyoming looming, the big question in the market remains: Will they or won't they go ahead with another round of quantitative easing? In the most recent round of QE, the Fed bought more than $600 billion of Treasury bonds between November 2010 and June of this year. In the first round of QE between Dec. 2008 and March 2010 - the Fed bought $1.7 trillion of debt, mostly mortgage securities. On The Failure Of Inflation Targeting, The Hubris Of Central Planning, The. Macro and Other Market Musings: It's Time for the Fed to Move Beyond Inflat.

I have a new policy paper that argues inflation targeting has passed its expiration date. 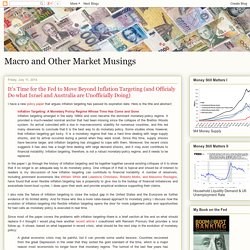 Here is the title and abstract: Inflation Targeting: A Monetary Policy Regime Whose Time Has Come and Gone Inflation targeting emerged in the early 1990s and soon became the dominant monetary-policy regime. Consumer Price Index (CPI) - Statistiska centralbyrån. The revised Consumer Price Index: changes in definitions and availability - Cost of being a pensioner surged 8% to £11,200 last year, finds study. By Tanya Jefferies for Thisismoney.co.uk Published: 09:01 GMT, 21 February 2015 | Updated: 09:01 GMT, 21 February 2015 The annual cost of being a pensioner jumped 8 per cent to £11,200 in 2014, a new study reveals. 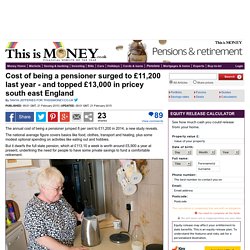 The national average figure covers basics like food, clothes, transport and heating, plus some modest optional spending on activities like eating out and hobbies. But it dwarfs the full state pension, which at £113.10 a week is worth around £5,900 a year at present, underlining the need for people to have some private savings to fund a comfortable retirement. Cost of living: Annual sum needed to fund decent retirement outstrips what you get on the basic state pension.

Inflation EU Economist. FOR central banks in the rich world, two is a magic number. 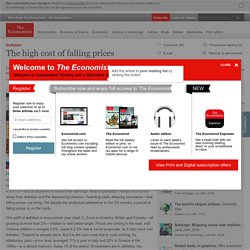 If prices rise at 2% a year, most shoppers can more or less ignore their slow ascent. And a touch of inflation is hugely helpful: it gives bosses a way to nudge unproductive workers—a pay freeze actually means a 2% cut—and an incentive to invest their earnings. Most importantly it keeps economies away from deflation and the depressing choices—hoarding cash, delaying purchases—that falling prices can bring.

Yet despite the professed adherence to the 2% mantra, a period of falling prices is on the cards. The whiff of deflation is everywhere (see chart 1). Oil explains a lot. The Theory of Interest and Prices in Paper Currency. Why Keynesian Economists Don’t Understand Inflation - Frank Hollenbeck - Mi. The “monetary cranks” and “ignorant zealots” of old are back preaching salvation if only we had more inflation. 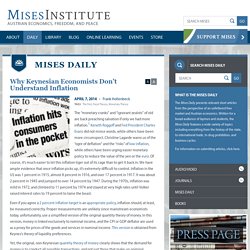 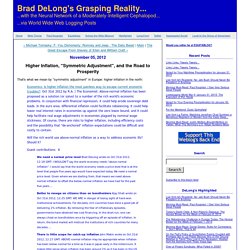 : Oct 31st 2012 by R.A. | The Economist: Above-normal inflation has been proposed as a solution (or salve) to a number of the rich world's economic problems. In conjunction with financial repression, it could help erode sovereign debt loads. In the euro area, differential inflation could facilitate rebalancing. It could help lower real interest rates in economies up against the zero lower bound, and it could help facilitate real wage adjustments in economies plagued by nominal wage stickiness.

Of course, there are risks to higher inflation, including efficiency costs and the possibility that "de-anchored" inflation expectations could be difficult and costly to contain. Will the rich world use above-normal inflation as a way to address economic ills? We need a normal price level Brad DeLong wrote on Oct 31st 2012, 12:18 GMT: I WOULDN'T say the world economy needs "above normal inflation". On The Failure Of Inflation Targeting, The Hubris Of Central Planning, The. Fed Policy and Inflation Risk by Martin Feldstein - Project Syndicate. 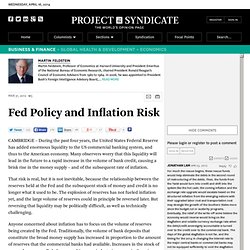 Click to hide this space CAMBRIDGE – During the past four years, the United States Federal Reserve has added enormous liquidity to the US commercial banking system, and thus to the American economy. Many observers worry that this liquidity will lead in the future to a rapid increase in the volume of bank credit, causing a brisk rise in the money supply – and of the subsequent rate of inflation. Australia Is Expensive, And The U.S. Is Cheap - Seeking Alpha.

Tiefe Inflation im Euro-Raum: Die Mär von der Deflation - Reflexe Nachricht. Is inflation (or deflation) “always and everywhere” a monetary phenomenon? Warning – this is likely to be an extremely unpopular post with a lot of people. 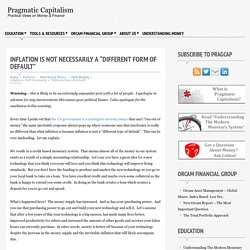