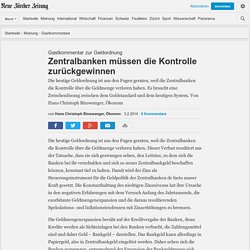 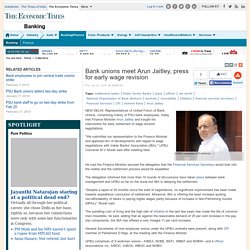 Bundesbank president questions troika report. Bundesbank president questions troika report Eurozone finance ministers are expected to receive the troika’s report on the state of Greece’s finances and the progress of its consolidation program on Monday but the head of Germany’s central bank, Jens Weidmann, has questioned how impartial the survey might be given that politicians had already decided to continue funding Athens. 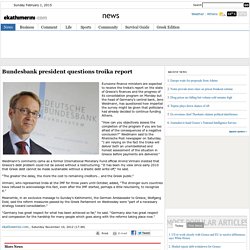 “How can you objectively assess the completion of the program if you are too afraid of the consequences of a negative conclusion?” Weidmann said to the Rheinische Post newspaper on Saturday. “I am relying on the fact the troika will deliver both an unembellished and honest assessment of the situation in Greece before payments are delivered.” The four most surprising things about the European bank stress tests. The continuing saga of bank self-regulation and other fairy tales featuring. Secular Stagnation and Wealth Inequality. Overview - Liquidity Lifelines: Tracking Fed Loans to Banks - Bloomberg. 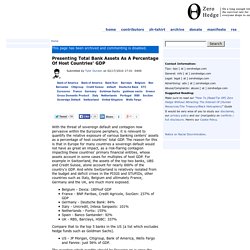 The reason for this is that in Europe for many countries a sovereign default would not have as great an impact, as a risk-flaring contagion impacting these countries' primary financial entities, whose assets account in some cases for multiples of host GDP. For example in Switzerland, the assets of the top two banks, UBS and Credit Suisse, alone account for nearly 600% of the country's GDP. And while Switzerland is relatively isolated from the budget and deficit crises in the PIIGS and STUPIDs, other countries such as Italy, Belgium and ultimately France, Germany and the UK, are much more exposed.

Compare that to the top 5 banks in the US (a list which excludes hedge funds such as Goldman Sachs). Banks’ holding in government bonds slip as foreign investors triple share - Gayatri Nayak & Saikat Das, ET Bureau Apr 21, 2015, 04.00AM IST (The share of commercial…) MUMBAI: Commercial banks' dominance over government bonds may be diminishing with their share of the market falling by almost 2 percentage points over the last one year, when foreign investors nearly tripled their holdings. 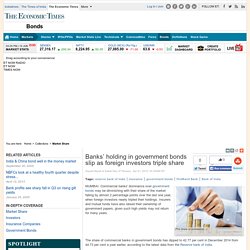 Insurers and mutual funds have also raised their ownership of government papers, given such high yields may not return for many years. The share of commercial banks in government bonds has dipped to 42.77 per cent in December 2014 from 44.73 per cent a year earlier, according to the latest data from the Reserve bank of India. The RBI has gradually lowered the level of deposits that a commercial bank must park in government papers. Historically, it has been observed that banks tend to park more funds in G-secs during the period of low credit offtake while they sell their bond portfolio when credit demand picks up.

Why Are Switzerland’s Foreign Assets so Low? The Growing Financial Exposure. Griechenland: Ein Grexit ist so nah wie fern - Griechenland - FAZ. Courtesy of the recently declassified Fed discount window documents, we now know that the biggest beneficiaries of the Fed's generosity during the peak of the credit crisis were foreign banks, among which Belgium's Dexia was the most troubled, and thus most lent to, bank. 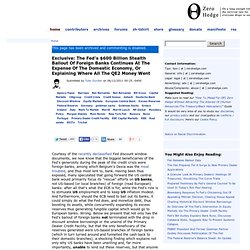 Having been thus exposed, many speculated that going forward the US central bank would primarily focus its "rescue" efforts on US banks, not US-based (or local branches) of foreign (read European) banks: after all that's what the ECB is for, while the Fed's role is to stimulate US employment and to keep US inflation modest. And furthermore, should the ECB need to bail out its banks, it could simply do what the Fed does, and monetize debt, thus boosting its assets, while concurrently expanding its excess reserves thus generating fungible capital which would go to European banks. Wrong. For those who can't wait for the punchline, here it is. So how did cash held by US banks fare during QE2? BNP Paribas Securities Corp. ‎www.institutionalinvestorchina.com/arfy/uploads/soft/120530/32320_09544433. The drop in US bond yields is perhaps the biggest surprise for investors this year. 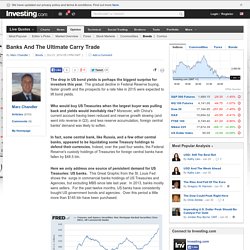 The gradual decline in Federal Reserve buying, faster growth and the prospects for a rate hike in 2015 were expected to lift bond yields. Who would buy US Treasuries when the largest buyer was pulling back and yields would inevitably rise? Moreover, with China's current account having been reduced and reserve growth slowing (and went into reverse in Q3), and less reserve accumulation, foreign central banks' demand was likely to soften. In fact, some central bank, like Russia, and a few other central banks, appeared to be liquidating some Treasury holdings to defend their currencies. Indeed, over the past four weeks, the Federal Reserve's custody holdings of Treasuries for foreign central banks have fallen by $48.5 bln. Time currency intervention inside information bank 3 October 2014. From ANZ comes an interesting item titled: What the RBA can learn from the RBNZ. 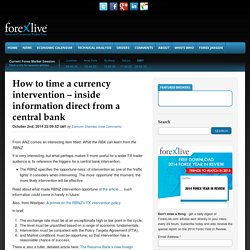 Largest US Banks. There are a few common causes for this error code including problems with the individual script that may be executed upon request. 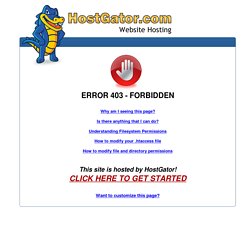 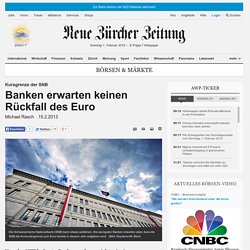 This may create a problem because banks keep only a small fraction of deposits on hand in cash; they lend out the majority of deposits to borrowers or use the funds to purchase other interest-bearing assets such as government securities. When a run comes, a bank must quickly increase its cash to meet depositors’ demands. EU banks slash sovereign holdings. If the Bank of England is going to do more QE, it should get ultra adventur. The Bank of England. As regular readers will know, I'm not in favour of a new programme of "quantitative easing" for the UK in current circumstances. Not until there is an extreme deflationary threat does it strike me as warranted. That moment may come soon enough, but we are not yet there. Yet perhaps I've been a little too dogmatic here, for I have assumed that any fresh programme of QE from the Bank of England would, as before, target mainly UK government bonds (gilt edged stock), where yields are already at record lows and where adding yet another source of demand to markets where investors seem unprepared to invest in anything else other than gilts would seem to be close to insane.

If the rate of interest on bonds is already close to zero, it's not clear that pushing it marginally lower still would persuade investors to put their money in higher risk assets. More on the European Bank Bailout. Cross-posted from Credit Writedowns Overnight, a group of us were exchanging e-mails on the recent coordinated central bank action to provide European banks the funding being denied them by the markets. Bank of England Quarterly Bulletin 2014 Q1 - qb14q1prereleasemoneycreation.

Bank Of Countrywide Lynch On The Top Ten Macro Themes For 2012. As we head into the artificial investing horizon of year-end, sell-side research is compelled to offer its best-guess at what will be key for the year ahead. We certainly head into 2012 with considerable potential downside risks - US recession? US Labour Market New.PDF (application/pdf Object) Wermutham - About us. Wermuth Asset Management GmbH (“WAM”) is a German family office and BaFin-regulated investment adviser. We prove through high risk-adjusted total returns that a positive environmental, social and governance impact can be synergetic with strong performance.

Attracting capital through performance, we contribute to the move of trillions of euros into resource-efficient companies and renewable power needed to stop climate change. As the world economy is undergoing major structural changes we see outstanding investment opportunities. The internet, decentralized renewable energy and progress in resource-efficiency have changed the rules of the game. We have substantial experience working and investing in western Europe and emerging markets. I posted the headlines earlier: Goldman Sachs has moved its forecast for the first Federal Reserve increase to Q3 2015 (from Q1 2016 ) The main points from GS: We still expect another year of near-zero rates despite healthy growth in output and employment Job market utilization remain well below normal – U6 remains at 12.1%, which we estimate is 2 percentage points above the cyclical normWe still expect inflation to normalize only gradually, despite the higher recent numbers … wage growth remains at just 2% … is a reason to doubt the staying power of the recent inflation pickupWe still believe that the risks of tightening policy too early at the zero lower bound outweigh those of tightening policy too late because going too early risks a painful reversal and potentially a need to return to QE and other unconventional tools.

UBS impulse. Banche, chi rischia di più con Italia e Grecia. UBS - UBS news - Global home. UBS - UBS news - Global home. As an asset class, emerging market currencies have offered a profitable and comparatively secure investment in the emerging markets for more than a decade. This is especially noteworthy since investors seeking to profit from emerging market growth do not immediately think about currencies as an asset class, although these currencies could make a substantial contribution to future returns in a diversified portfolio.

In the recently published UBS study "Emerging market currencies: The case for an underappreciated asset class," analysts from UBS CIO Wealth Management Research examine the asset class's characteristics and qualities. These include above-average interest rates and long-term upside potential versus the major global currencies. Zurich/Basel, 3 October 2012 – It has now been five years since the outbreak of the financial crisis. Economic outlook, analysis and forecasts - OECD. Goldman Sachs’s Top Trades for 2012 - The Source - WSJ. By Giles Turner Goldman Sachs has announced its much anticipated top trades for 2012 and is betting that global markets, particularly the euro zone, will continue to deteriorate.

Global Risks Landscape and Interconnection Maps - Industry Knowledge Hub - Zurich Insurance Group. The Empire Strikes Back? — www.thereformedbroker.com — Readability. In some ways, Wall Street will be forever chastened and changed by the events of the credit crisis and its aftermath. But in other ways, business as usual will surely continue for the nation’s Systemic Six banks, even if it’s a largely scaled back affair as Ben White demonstrated at Politico the other day (see How Washington Beat Wall Street). Einlegerschutz und Bankensanierung: Die Schweiz wäre besser vorbereitet als. Zypern steckt tief in der Krise. Das Bankensystem ist angeschlagen, und dem Staat fehlen die Mittel, die Banken zu sanieren. Contrarian Stock Investing. ROBERT SHILLER: I'm Bullish On Finance And I'm Telling My Students To Go In. Bank Runs: The Concise Encyclopedia of Economics. The Complete And Annotated Guide To The European Bank Run (Or The Final Pha.