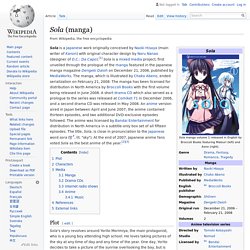 He loves taking pictures of the sky at any time of day and any time of the year. One day, Yorito decides to take a picture of the sunrise overlooking the bay, but is deterred when he meets a strange girl trying to force a vending machine that stole her money to give her what she tried to buy—a can of tomato juice. Yorito helps her with forcing the machine while attempting to strike up conversation with her, despite it being four in the morning. Fate/stay night: Unlimited Blade Works. The anime is jointly produced by Aniplex, Notes, and Ufotable, the same studios that co-produced the 2011–2012 anime adaptation for Fate/Zero. 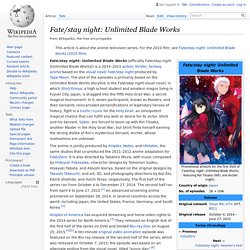 It is also directed by Takahiro Miura, with music composed by Hideyuki Fukasawa; character designs by Tomonori Sudou, Hisayuki Tabata, and Atsushi Ikariya, based on the original designs by Takashi Takeuchi; and art, 3D, and photography directions by Koji Eto, Kōjirō Shishido, and Yuichi Terao, respectively. The first half of the series ran from October 4 to December 27, 2014. The second half ran from April 4 to June 27, 2015.[1] An advanced screening online premiered on September 28, 2014, in several countries across the world, including Japan, the United States, France, Germany, and South Korea.[2] Episode list[edit] First season[edit] Second season[edit] References[edit] 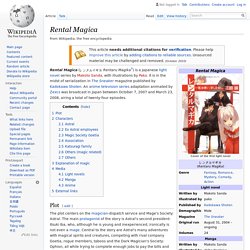 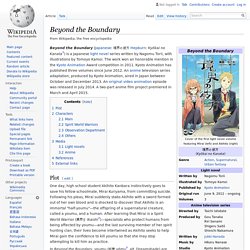 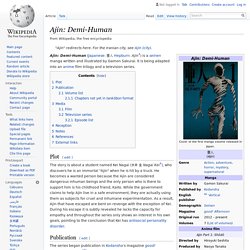 Is a seinen manga written and illustrated by Gamon Sakurai. It will be adapted into three anime films.[1] Plot[edit] The story is about a student named Kei Nagai, who discovers he is an immortal "Ajin" when he is hit by a truck. He becomes a wanted person because the Ajins are considered criminals and the only person who is there to support him is his best friend, Kaito. Psychic Detective Yakumo. Psychic Detective Yakumo (心霊探偵 八雲, Shinrei Tantei Yakumo?) 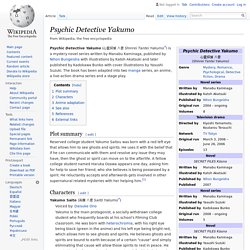 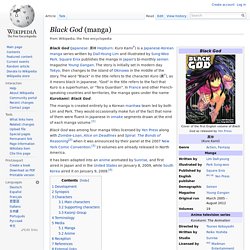 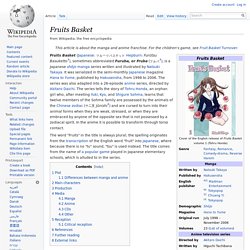 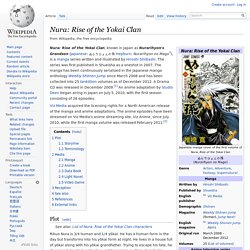 , is a manga series written and illustrated by Hiroshi Shiibashi. The series was first published in Shueisha as a oneshot in 2007. The manga has been continuously serialized in the Japanese manga anthology Weekly Shōnen Jump since March 2008 and has been collected into 25 tankōbon volumes as of December 2012. A Drama CD was released in December 2009.[1] An anime adaptation by Studio Deen began airing in Japan on July 5, 2010, with the first season consisting of 26 episodes. Viz Media acquired the licensing rights for a North American release of the manga and anime adaptations.

Plot[edit] Rikuo Nura is 3/4 human and 1/4 yōkai. Bleach (anime) The anime adaptation of Bleach follows the story of the manga, although introducing several original storylines. 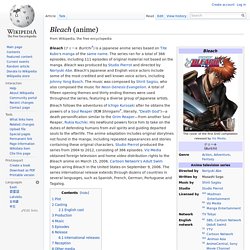 In Karakura Town, Ichigo Kurosaki becomes a substitute Soul Reaper, when Rukia Kuchiki cannot fulfill her duties after engaging in battle with a particularly powerful Hollow. He later discovers several of his friends and classmates are spiritually aware and have powers of their own: Uryū Ishida is a Quincy, Orihime Inoue possesses a group of protective spirits known as the Shun Shun Rikka and Yasutora Sado ("Chad") has strength equal to the Hollows, later defined as being a Fullbringer.

When Rukia is sentenced to death for her transgressions in the human world and taken back to the spirit world of Soul Society, Ichigo seeks out the assistance of Kisuke Urahara and Yoruichi Shihōin, unbeknownst to him as being two exiled Soul Reapers, to allow himself and his friends to save Rukia. The stories are broken down into arcs. The music of Bleach was composed by Shiro Sagisu. Ushio and Tora. Story[edit] Ushio and Tora centers around the travels and battles of Ushio Aotsuki (蒼月潮 , Aotsuki Ushio?)

, who is constantly being stalked and aided by a gigantic, supernatural and sometimes invisible tiger-like monster. Ushio's family maintains a temple in Japan, where 500 years ago, his samurai ancestor battled that same monster to a standstill, and eventually trapped him against a rock using a cursed spear called the "Beast Spear", which grants strength, speed, and endurance to the wielder in exchange for his soul. Ushio accidentally unsealed the cave Tora was trapped in. Initially, Ushio refuses to remove the spear pinning Tora (とら, Japanese for tiger) down (as Tora made the strategic blunder of mentioning that the first thing he would do upon being freed would be to devour Ushio), but Tora's unsealed presence attracts various monsters to the temple.

The story also includes Ushio's relationships with two girls: the tomboyish Asako Nakamura (中村 麻子 , Nakamura Asako?) I) The Beginnings. Absolute Duo. Plot[edit] Absolute Duo follows the viewpoint character, Tor, who enrolls in Koryo Academy, a high school where its students battle each other with weapons known as Blaze (焔牙/ブレイズ, Bureizu?) As training to become future peacekeepers. The students must pass a battle during the qualification ceremony of the freshmen day in order to be enrolled in the academy. Kaze no Stigma. Plot[edit] Kazuma Kannagi was the eldest son of the Kannagi family and presumed heir.

However, due to his inability to use "Enjutsu" (炎術? , Blaze Technique), the power to control flames, he was considered to be useless within his family. Despite his inability to wield fire, his father insisted on him competing for the right to wield "Enraiha" (炎雷覇? The Betrayal Knows My Name. The Betrayal Knows My Name (Japanese: 裏切りは僕の名前を知っている, Hepburn: Uragiri wa Boku no Namae o Shitteiru?) , also known as UraBoku, is the title of a shōjo written and illustrated by Odagiri Hotaru. It premiered in the shōjo magazine Monthly Asuka in October 2005. An anime adaptation began in April 2010 on Chiba TV. Story[edit] Sakurai Yuki is a teenager with a mysterious power. Inu x Boku SS. Inu × Boku SS (妖狐×僕SS, Inu Boku Shīkuretto Sābisu?

, lit. The Dog and Me Secret Service), also known as Youko × Boku, is a Japanese manga series written and illustrated by Cocoa Fujiwara. An anime adaptation by David Production aired in Japan between January and March 2012. The anime has been licensed by Sentai Filmworks for streaming, and home video release in North America. Ghost Slayers Ayashi. It received its satellite television premiere across Japan on Animax on November 14, 2006, and also received its English language television premiere on Animax's English networks, Animax Asia, across Southeast Asia and South Asia from January 2009.

While originally scheduled to air for 52 episodes, the series' length was shortened to 25 due to its low ratings and ended its run on March 31, 2007. Black Butler. Strike The Blood Wiki - Wikia. Vampire Knight Wiki - Wikia. Ao no Exorcist Wiki - Wikia. Natsume's Book of Friends. Natsume's Book of Friends (Japanese: 夏目友人帳, Hepburn: Natsume Yūjin-chō?) Is a Japanese fantasy manga series by Yuki Midorikawa. It began serialization by Hakusensha in the shōjo manga magazine LaLa DX in 2005, before switching to LaLa in 2008. The chapters have been collected in eighteen bound volumes.

The series is about Natsume, an orphaned teenage boy who can see spirits, who inherits from his grandmother the notebook she used to bind spirits under her control. Natsume's Book of Friends was a finalist for the first Manga Taishō award in 2008.[1] Dazzle (manga)