A.I.C.O. -Incarnation- Plot[edit] In the year 2035, a biological research project went awry, resulting in an incident called the "Burst" that transformed Kurobe Gorge into a quarantine area infested by a rampant growth of synthetic organisms. 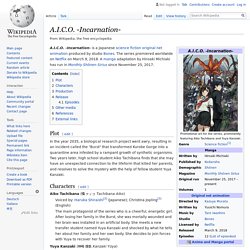 Two years later, high school student Aiko Tachibana finds that she may have an unexpected connection to the lifeform that killed her parents, and resolves to solve the mystery with the help of fellow student Yuya Kanzaki. Characters[edit] Aiko Tachibana (橘 アイコ, Tachibana Aiko) Voiced by: Haruka Shiraishi[2] (Japanese); Christina Jopling[3] (English) The main protagonist of the series who is a cheerful, energetic girl. Yuya Kanzaki (神崎 雄哉, Kanzaki Yūya) A new student at Aiko's school and the other protagonist of the series with a mature and aloof demeanor He tells Aiko the truth abour her reconstruction and joins the Divers to reach Primary Point. Daisuke Shinoyama (篠山 大輔, Shinoyama Daisuke) Voiced by: Ryota Takeuchi[2] (Japanese); Phil Dubois[3] (English) Leader of the Divers. Dimension W. Dimension W (Japanese: ディメンションW?) 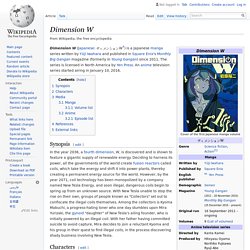 Is a Japanese manga series written by Yūji Iwahara and published in Square Enix's Monthly Big Gangan magazine (formerly in Young Gangan) since 2011. The series is licensed in North America by Yen Press. An anime television series started airing in January 10, 2016. Synopsis[edit] In the year 2036, a fourth dimension, W, is discovered and is shown to feature a gigantic supply of renewable energy. Characters[edit] Kyōma Mabuchi (マブチ・キョーマ, Mabuchi Kyōma?) Voiced by: Daisuke Ono[3] A human Collector who has largely sworn off all Coil-related technology, and has a hobby of restoring old gasoline-powered cars in a junkyard.

Mira Yurizaki (百合崎 ミラ, Yurizaki Mira?) Voiced by: Reina Ueda[3] A highly-advanced robot who exhibits human mannerisms and insists that she is a normal girl despite her robotic headgear, metallic tail, and other inhuman physical attributes. Albert Schuman (アルベルト・シューマン, Aruberuto Shūman?) The irregular at magic high school. Mahouka Koukou no Rettousei Wiki. Gargantia on the Verdurous Planet. Plot[edit] In the distant future, mankind has taken to the stars and formed the Galactic Alliance of Humankind (人類銀河同盟, Jinrui Ginga Dōmei?). 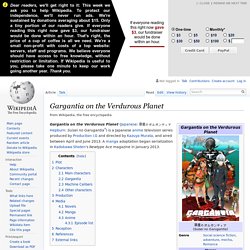 The Alliance is engaged in a perpetual war with a tentacled alien species known as the Hideauze (ヒディアーズ, Hidiāzu?). Sixteen-year-old Ensign Ledo is a soldier in the Galactic Alliance, piloting a Machine Caliber (マシンキャリバー, Mashin Kyaribā?) , an artificial intelligence-automated, humanoid-shaped battle suit, which he refers to as "Chamber". After a failed attempt by the Alliance forces to destroy an enemy super-weapon, Ledo is knocked into a wormhole and loses consciousness. Characters[edit] Main characters[edit] Ledo (レド, Redo?) Voiced by: Kaito Ishikawa (Japanese), Alan Lee (English) A 16-year-old Galactic Alliance ensign.

Amy (エイミー, Eimī?) Voiced by: Hisako Kanemoto (Japanese), Cassandra Lee Morris (English) A 15-year-old messenger who meets Ledo when he wakes up from hibernation and serves as his guide. Blue Gender. Plot[edit] In the year 2009, Yuji Kaido is an average young adult male diagnosed with a serious disease (the "B-cells") and is put into cryogenic stasis until a cure is found. 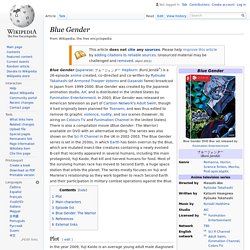 Twenty-two years later, he is awakened in the midst of a raging battle between armored soldiers and insectoid beings called the "Blue" which have overrun the Earth. The group of soldiers are from an orbiting space colony collectively called Second Earth and were ordered to recover "sleepers" around the Earth. Among them is the soldier Marlene Angel, who at first appears to be heartless toward others. On the journey to the space colony, Second Earth,Yuji meets many of the humans that were left behind during the evacuation due to limited resources. On their journey all of the soldiers are killed, except for Marlene, causing Yuji to fall into a deep depression as he recognizes the destruction around him and his own inability to save those he cares about.