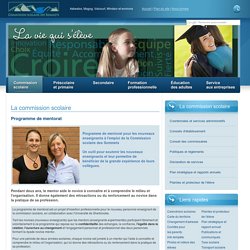 The Importance of Mentoring Young People. Organization Needs 500 New Mentors for Students. More than five years ago, reading to a third grade girl was part of Kerri DeGraff's role as a mentor. 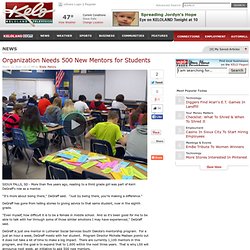 "It's more about being there," DeGraff said. "Just by being there, you're making a difference. " DeGraff has gone from telling stories to giving advice to that same student, now in the eighth grade. "Even myself, how difficult it is to be a female in middle school. And so it's been good for me to be able to talk with her through some of those similar emotions I may have experienced," DeGraff said. DeGraff is just one mentor in Lutheran Social Services South Dakota's mentorship program. LSS teams up with several school districts, including those in Minnehaha and Lincoln Counties. "There are a lot of young boys in the community who are lacking a male role model," Madsen said. Madsen said there is no need for applicants to be intimidated. "They don't have to prepare anything, they don't need to teach or counsel the students. Which is why DeGraff does not view her role as just a mentor anymore.

Lunch Buddies pairs students with mentors. Mentoring: The Hindu-American Community's Great Seva  For seven years, I was active with Big Brother/Big Sisters, working with a young man who grew up in a public housing complex in Wilmington, Delaware. 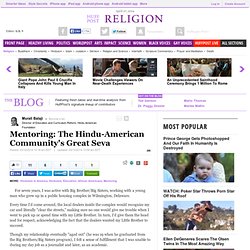 Every time I'd come around, the local dealers inside the complex would recognize my car and literally "clear the streets," making sure no one would give me trouble when I went to pick up or spend time with my Little Brother. In turn, I'd give them the head nod for respect, acknowledging the fact that the dealers wanted my Little Brother to succeed. Though my relationship eventually "aged out" (he was 19 when he graduated from the Big Brothers/Big Sisters program), I felt a sense of fulfillment that I was unable to during my day job as a journalist and later, as an academic. Last October, I spoke at the Balaji Temple in Aurora, Illinois, to talk about the challenges the Hindu American community -- particularly those who attend temples regularly -- faces in broader outreach. Devenez mentors auprès des étudiants de l'Université Laval. Speed Mentoring: Your Path to Success 01/03/14.

On Saturday 1st March 2014, over 400 teenagers gathered at the prestigious Royal College of Surgeons in Holborn, London for an afternoon of innovative careers guidance and speed mentoring from over 60 top professionals. 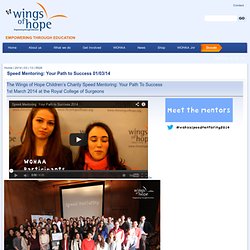 The event was targeted at 14-20 year olds who had exclusive access to professionals from over 30 industries including banking, law, medicine, fashion, PR, event management, journalism, sustainability, music production, acting and piloting. With ten-minute slots over a two-hour period, the students were able to gain key insights into a wide variety of industries, as they travelled from sector to sector to begin their journey on the path to success. The event was opened by Richard Whitehead MBE, the Paralympic Champion and world record holder who won Gold in the 200m T42 event at the London 2012 Paralympic Games. Mr Whitehead provided the keynote speech for the day, inspiring participants with his achievements both on and off the track. Mentoring programs a model for the country. By Denise Crosby dcrosby@stmedianetwork.com March 13, 2014 9:16PM Updated: April 15, 2014 6:22AM It would be next to impossible to say how many lives have been changed — but the statistics tell us a lot. 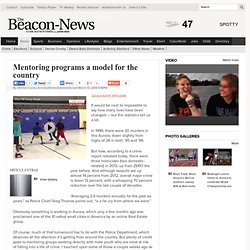 Ottawa Innercity Ministries (Est. 1988): Justice, Community, Hope. Posted by moira on March 14, 2014 · Leave a Comment Mentorship is one of the most important components of the P4Y program. 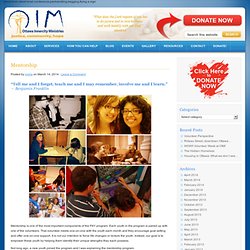 Each youth in the program is paired up with one of the volunteers. That volunteer meets one-on-one with the youth each month and they encourage goal setting and offer one-on-one support. It is not our intention to force life changes or lecture the youth. Instead, our goal is to empower these youth by helping them identify their unique strengths they each possess. Not long ago, a new youth joined the program and I was explaining the mentorship program. Pourquoi les écoles d'ingénieurs peinent à attirer les filles. Tutoring and Mentoring youth. The Benchmarking Exchange and Best Practices Homepage. Benchmark. From Wikipedia, the free encyclopedia Benchmark may refer to: Business[edit] Geology[edit] Technology[edit] Science[edit] 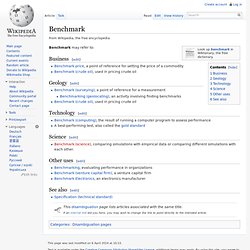 Benchmarking. Benchmarking is the process of comparing one's business processes and performance metrics to industry bests or best practices from other industries. 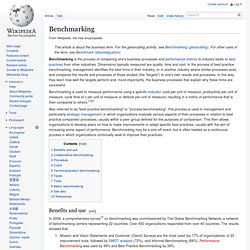