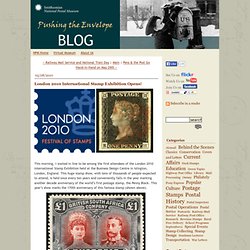 This huge stamp show, with tens of thousands of people expected to attend, is held once every ten years and conveniently falls in the year marking another decade anniversary of the world’s first postage stamp, the Penny Black. This year’s show marks the 170th anniversary of this famous stamp (shown above). Click Here To Learn The Behind-The-Scenes Story of This Stamp Additionally, this year’s show celebrates the 100th anniversary of the ascension to the throne of King George V (shown with his wife above). This king spent a great deal of his spare time during his twenty-five year reign working on his stamp collection. More updates from the London 2010 Show with pictures coming shortly…..in the meantime visit the Offical London 2010 Website. Siemon Allen Stamps. Rare South African Stamps. Www.tonybray.co.uk/lists/fra.pdf. French Stamps. 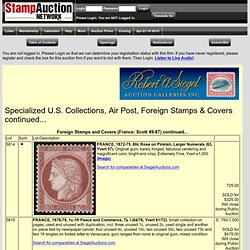 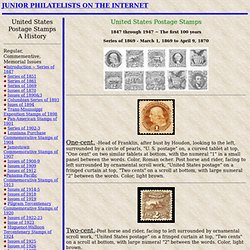 -Head of Franklin, after bust by Houdon, looking to the left, surrounded by a circle of pearls, "U. S. postage" on, a curved tablet at top, "One cent" on two similar tablets at bottom, with the numeral "1" in a small panel between the words. Two-cent. Three-cent. Six-cent. Ten-cent. Twelve-cent. Postage stamps and postal history of the United States.

The postal history of the United States was rather haphazard until after the Revolutionary War, when eventually a national postal system was established. 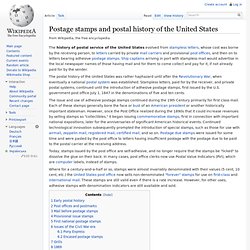 Stampless letters, paid for by the receiver, and private postal systems, continued until the introduction of adhesive postage stamps, first issued by the U.S. government post office July 1, 1847 in the denominations of five and ten cents. Today, stamps issued by the post office are self-adhesive, and no longer require that the stamps be "licked" to dissolve the glue on their back. 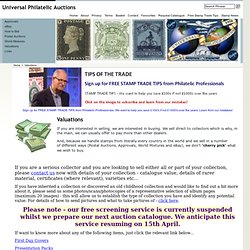 We sell direct to collectors which is why, in the main, we can usually offer to pay more than other dealers. And, because we handle stamps from literally every country in the world and we sell in a number of different ways (Postal Auctions, Approvals, World Mixtures and eBay), we don't 'cherry pick' what we wish to buy. If you are a serious collector and you are looking to sell either all or part of your collection, please contact us now with details of your collection - catalogue value, details of rarer material, certificates (where relevant), varieties etc... If you have inherited a collection or discovered an old childhood collection and would like to find out a bit more about it, please send us some photos/scans/photocopies of a representative selection of album pages (maximum 20 images) - this will allow us to establish the type of collection you have and identify any potential value.

First Day Covers Presentation Packs. What are the most famous rare and valuable stamps? The first question which I am always asked when I say that I am a philatelist is: How much are the rarest stamps worth? 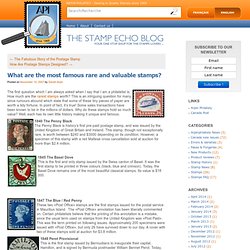 This is an intriguing question for many, since rumours abound which state that some of these tiny pieces of paper are worth a tidy fortune. Stamp Collecting World. Rare Stamps - Valuable Postage Stamps - Expensive Postal Stamps. South Africa. World's Most Expensive Stamps. Since the turn of the twentieth century, collectors have swooned over rare and unusual stamps. 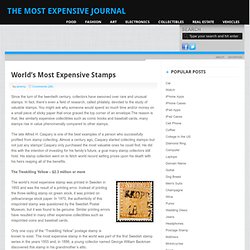 In fact, there’s even a field of research, called philately, devoted to the study of valuable stamps. You might ask why someone would spend so much time and/or money on a small piece of sticky paper that once graced the top corner of an envelope.The reason is that, like similarly expensive collectibles such as comic books and baseball cards, many stamps rise in value phenomenally compared to other stamps. The late Alfred H. Caspary is one of the best examples of a person who successfully profited from stamp collecting. Mistakes Worth A Million! 10 Most Valuable Stamp Inverts. Hit parade of 10 Most Valuable Postage Stamp Inverts We are all Humans. 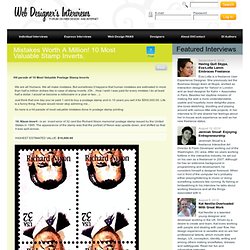 We all make mistakes. But sometimes it happens that human mistakes are estimated in more than half a million dollars like in case of stamp inverts. (Oh…How I wish I was paid for every mistake I do at least half a dollar. I would’ve become a millionaire in a year or two…). Just think that one day you’ve paid 1 cent to buy a postage stamp and in 10 years you sell it for $500,000.00. View topic - Netherlands Queen Wilhelmina "Fur Collar" stamps discussion. This thread is about the usage of one of the longest definitive issues of the Netherlands. 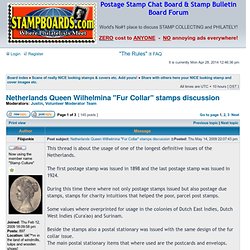 The first postage stamp was issued in 1898 and the last postage stamp was issued in 1924. During this time there where not only postage stamps issued but also postage due stamps, stamps for charity intuitions that helped the poor, parcel post stamps. Some values where overprinted for usage in the colonies of Dutch East Indies, Dutch West Indies (Cura'ao) and Surinam. Beside the stamps also a postal stationary was issued with the same design of the fur collar issue.The main postal stationary items that where used are the postcards and envelops. The last stamps and postal stationary items of this issue where demonetized on 1 January 1936. During the 37 years of usage a lot of interesting things can be found in the postal history corner. Top rarest stamps of the world, value & prices. Rare postage stamps related articles: Stamp collecting tools, are you familiar with stamp tongs, perforation gauges, and other philately supplies? 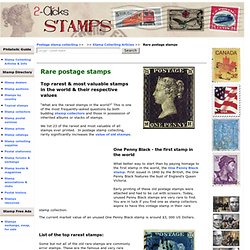 You can read them all here. 10 Most Expensive Collectible Stamps. Let’s take a quick journey in the world of collectible stamps. One of the hobbies we pick up as children and remain truthful to throughout our adult life is stamp collecting. If as youngsters the reasons which push us to arrange such collections can be considered rather naive, such as the importance of the subjects depicted (with a stronger interest for those representing ships, locomotives, planes, animals), as we get older, we tend to be more attentive to those intricate little details such as historical value, geographical aspects, number of prints, etc. All kind of stamps take their place in one’s collection, and whether you’re an an avid collector or not, I’m sure you’ll find interesting getting to know some of the most expensive collectible stamps in the world and the story behind them. 1. Treskilling yellow 2. 3. This 1856 one cent black on red stamp was once considered to be the world’s most expensive.