'A generation of boys is being failed': Study finds gender divide in language skills when children start school. Boys are almost twice as likely as girls to be falling behind in their language skills by the time they start school, putting their chances of being successful in life at risk, according to a report from the charity Save the Children. 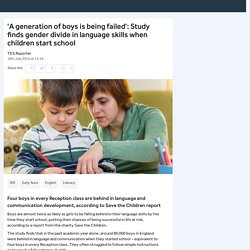 The study finds that in the past academic year alone, around 80,000 boys in England were behind in language and communication when they started school – equivalent to four boys in every Reception class. They often struggled to follow simple instructions or to speak a full sentence, it adds. Unless action is taken to ensure all children have access to good quality early years education, almost a million more young boys could be left behind in the next 10 years, the report warns. "The gender gap is well-documented," it says. "It has hardly changed for five-year-olds over the past decade, despite a dramatic improvement in overall results. Lasting repercussions At the other end of the scale, in Richmond, south-west London, the gap is 5.4 percentage points.

Spending more time teaching vocab doesn't always work, study finds. The new study, conducted by Ann Arthur and Dawn Davis, from the University of Nebraska-Lincoln, in the US, found that there was no link between how much time pupils spent learning vocabulary and how much new vocabulary they learn. 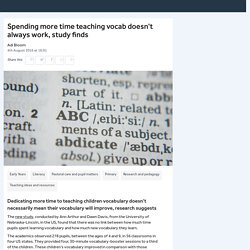 The academics observed 278 pupils, between the ages of 4 and 9, in 56 classrooms in four US states. They provided four, 30-minute vocabulary-booster sessions to a third of the children. These children’s vocabulary improved in comparison with those children who were simply given general language-comprehension lessons. A third of the children, however, were given a double dose of booster sessions: eight 30-minute sessions a week.

These children’s vocabulary improved the same amount as that of the children who were given four booster sessions a week. The importance of pupils’ vocabulary range and size has been a key issue in England this summer. How to...plan for and teach tricky vocabulary. Let’s start with a little activity. 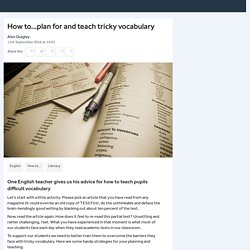 Please pick an article that you have read from any magazine (it could even be an old copy of TES!) First, do the unthinkable and deface the brain-bendingly good writing by blacking out about ten percent of the text. Now, read the article again. How does it feel to re-read this partial text? Unsettling and rather challenging, I bet.

To support our students we need to better train them to overcome the barriers they face with tricky vocabulary. Test their vocabulary knowledge We can start by testing them on the key vocabulary in our subject to ascertain what they know. Delving into the world of words is not simply the preserve of bookworm English teachers. Alex Quigley is an English teacher and Director of Research School at Huntington School. Vocabulary learning. Primary Ideas: 4 Pics 1 Word in Your Classroom. On Saturday, I was sat near a child on a train who was playing 4 Pics 1 Word on his father's phone. 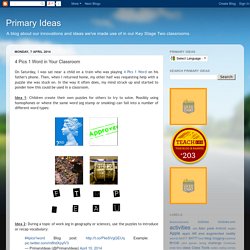 Then, when I returned home, my other half was requesting help with a puzzle she was stuck on. In the way it often does, my mind struck up and started to ponder how this could be used in a classroom. Idea 1: Children create their own puzzles for others to try to solve. Possibly using homophones or where the same word (eg stamp or smoking) can fall into a number of different word types: Note: We have not seen this idea anywhere else. We gave it a go with a Year Five class. Vocabulary Strategies - Learning Tasks. Choosing Words to Teach. The teacher's edition for a fourth-grade anthology suggests teaching the following words before inviting students to read an excerpt from Charlotte's Web (White, 1952): comfort, cunning, endure, friendless, frolic, lonely, soaked, and stealthily. 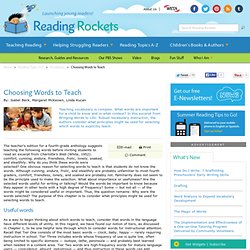 Why do you think these words were selected? One obvious reason for selecting words to teach is that students do not know the words. Although cunning, endure, frolic, and stealthily are probably unfamiliar to most fourth graders, comfort, friendless, lonely, and soaked are probably not. Familiarity does not seem to be the principle used to make the selection. What about importance or usefulness? Useful words As a way to begin thinking about which words to teach, consider that words in the language have different levels of utility. Identifying Tier Two words in texts To get an idea of the process of identifying Tier Two words, consider an example. Johnny Harrington was a kind master who treated his servants fairly.